Welcome to Day 1 of the Digital Content NewFronts. Ad Age’s Jeanine Poggi, Ilyse Liffreing and Garett Sloane will be live-blogging the week-long dog-and-pony show where digital publishers, from YouTube and Twitter to Condé Nast and Meredith, are presenting buzzy new content and ad products to media buyers and marketers.

While it’s expected much of the conversations happening this week will be similar to those of years past, the inclusion of big-box retailers Walmart and Target to the event is a sign the NewFronts are evolving beyond content into a showcase for commerce as well.

Today we will hear from The New York Times, Viacom and Twitter, among others.

Every year there’s one word or phrase that publishers lean into, such as, in years past, brand safety, augmented reality and branded content. But this year's most overused phrase won’t likely have anything to do with digital publishing at all. Instead, let’s take a shot every time someone mentions “Game of Thrones.” It’s worth noting, during a week dedicated to home-grown digital content, that the thing on everyone’s mind is a traditional TV show.

On Monday, Twitter hosted its yearly advertising showcase, but unlike last year, CEO Jack Dorsey was not among the speakers. Last year, Dorsey thanked advertisers. But he didn’t take the stage this time around. It is unclear if he was on one of his famous meditation retreats or perhaps even fasting. Twitter is known to host the ad world for dinner after its NewFronts, which could conflict with his particular eating habits. —G.S.

Twitter announces a new sponsorship opportunity for marketers called the Stan-cam. The camera will follow Matt Derella around the world for the next year. Allegedly it’s already sold out! #StanDerella #2019NewFronts #Newfronts pic.twitter.com/kUbqkU17YJ

Football is celebrating the touchdown, not discouraging overly theatrical routines like it has in the past, thanks to a new video series on Twitter. The social platform and NFL launched a series of video programs, an extension of a multi-year partnership, and one of the plans is to share highlights of touchdowns and celebrations.

It seems the NFL is embracing the end-zone dance it once shunned. In the past, players were fined for over-the-top celebrating. In 2017, the league started loosening rules, like allowing players to use the football as a prop.

With a video series, though, the league isn’t just allowing the celebrations, it’s fully embracing that classic part of the game.

New York Giants Wide Receiver Golden Tate was on stage at Twitter’s NewFronts event to promote the league’s video partnership plans. The NFL is heading into its 100th year and is ramping up marketing for the milestone, while trying to land advertisers for it. The NFL will stream pregame question-and-answer sessions, and other live programs around “tentpole” events like the NFL Draft, among other content offerings on Twitter. —G.S.

“I apologize for hugging Kelly Day,” Spade says, adding that he doesn’t want to get in trouble for hugging the president of Viacom Digital Studios.

The show will include interviews with actresses Lori Loughlin and Felicity Huffman, Spade jokes, referring to the two women who are named in a college-admissions cheating scandal.

The yet-to-be-titled show will air weeknights at 11:30 p.m, and “weekdays for people who secretly watch on their phone at work, which is all of you,” Spade adds. —J.P. 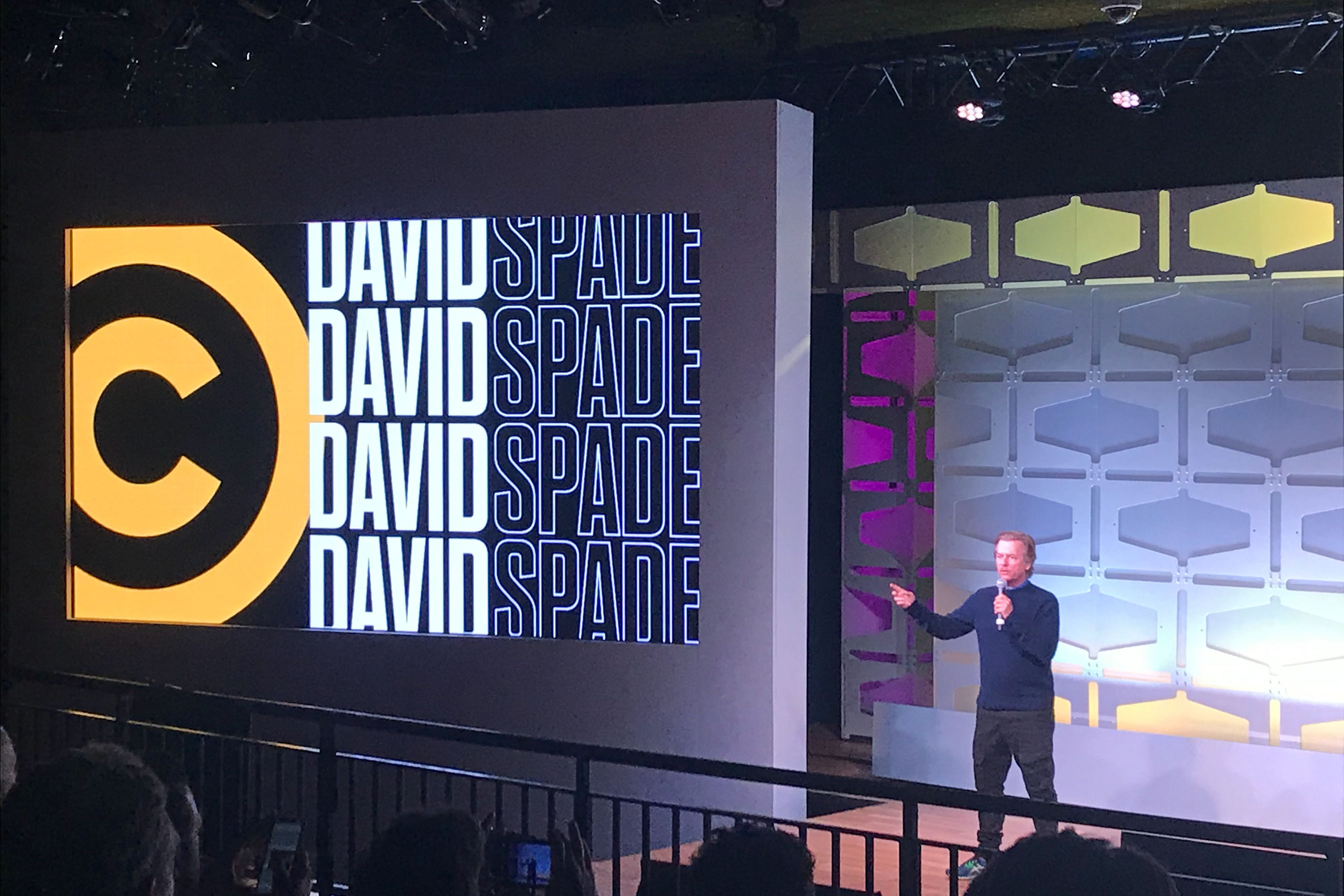 Viacom hints at a new partnership with Twitter tied to the VMAs, but leaves us hanging until Twitter’s NewFront later tonight. —J.P.

“The house is now full,” the voice of God announces at Viacom’s presentation. People are being directed to an overflow room at the PlayStation Theater. Apparently there's lots of interest in Brent Rivera and Eva Gutowski, whoever they are. —J.P.

Everyone dressed up ready for #NewFronts.

#Voice is at the forefront of the hottest area of technology and @BBCNews is ready to take this trend because it’s at the origin of what we do — says @KattyKayBBC host for BBC News in Washington #NewFronts @iab pic.twitter.com/NKRnpJiJfG

I guess we have nothing better to do this week than to spend 15 minutes filling in The New York Times crossword puzzle as a group. —J.P. 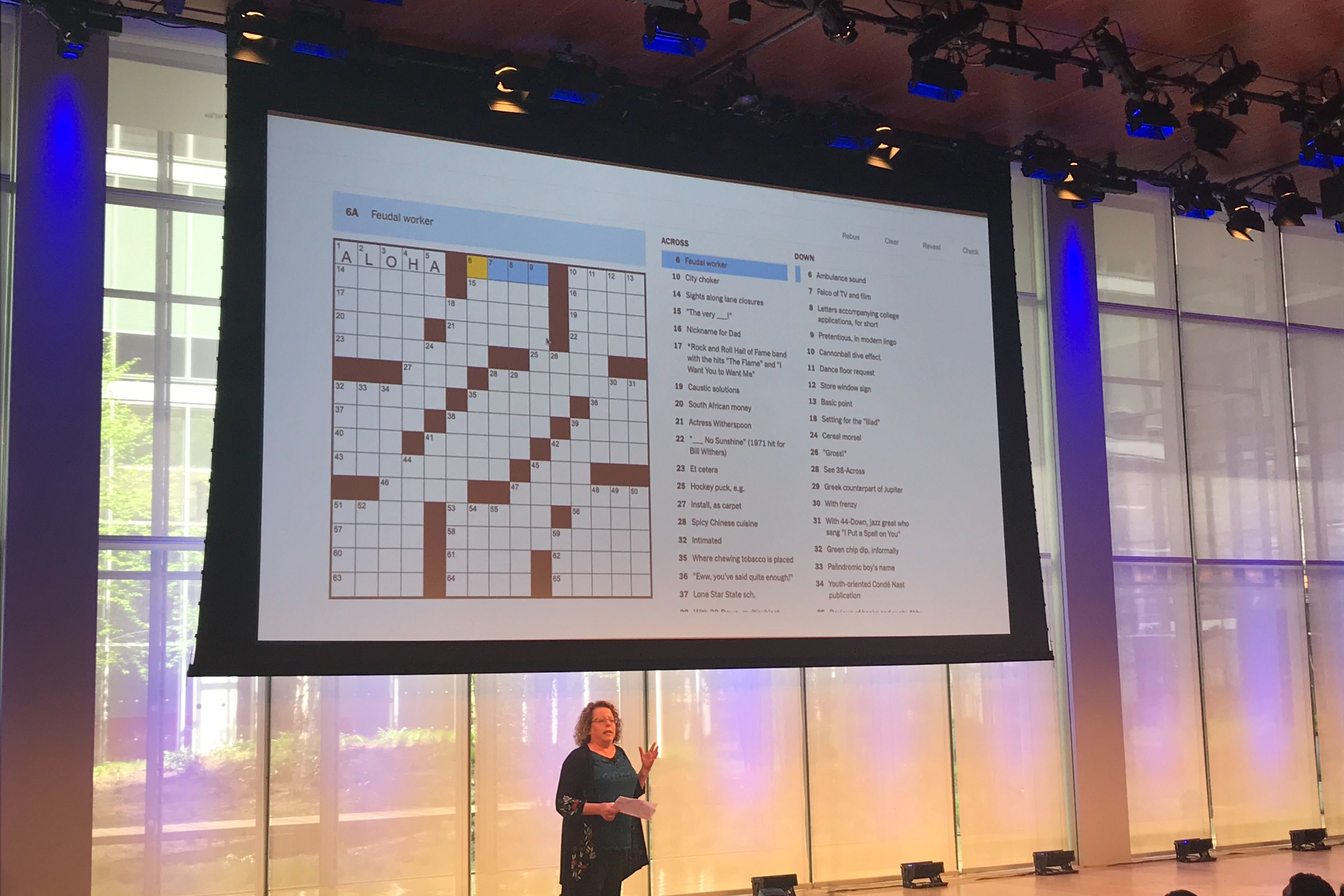 “Cooking tells us where we’ve been, where we are, and where we’re going.” —Rachael Ray 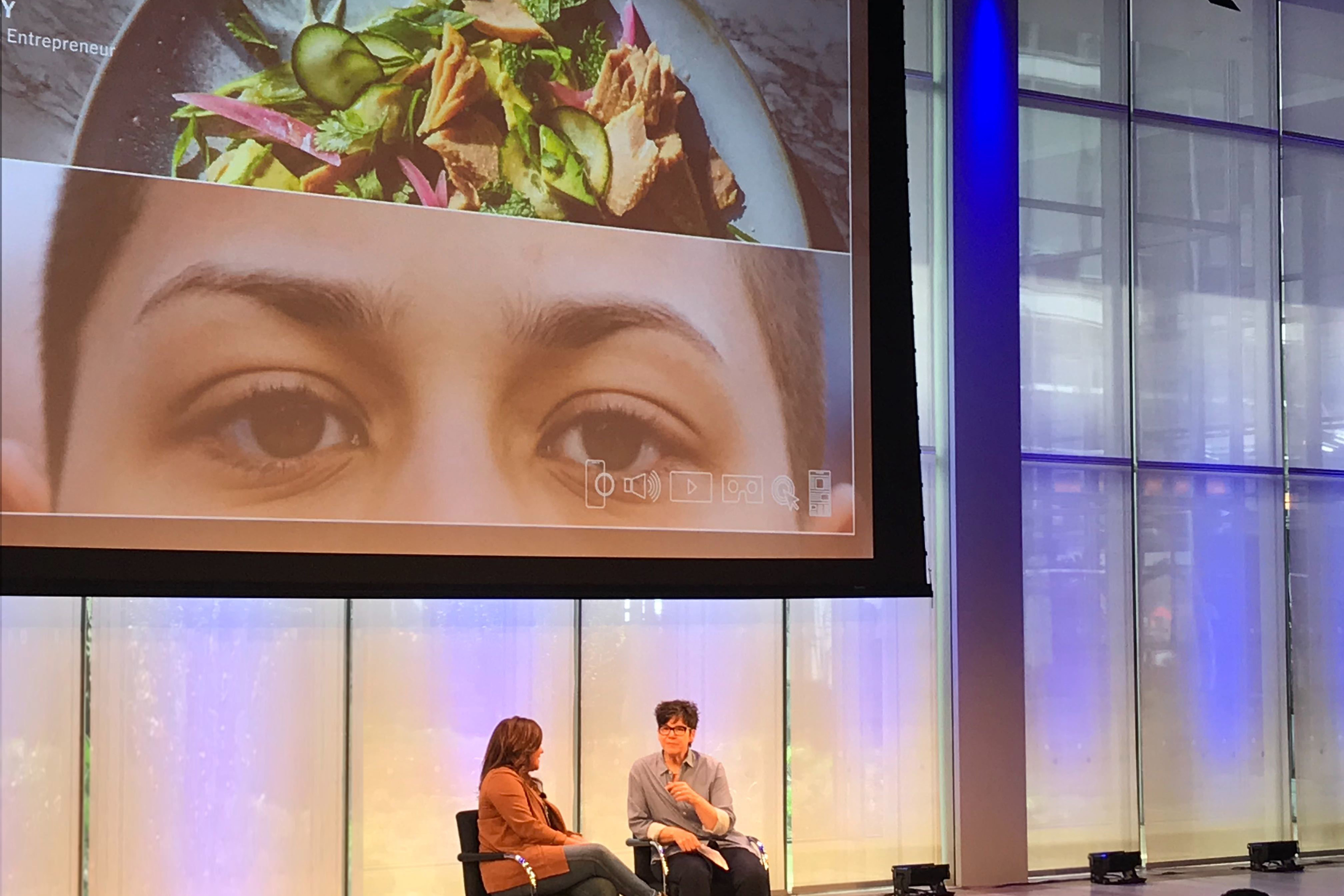 The New York Times says over the past year every article it produces receives a “feels score” that matches content against the emotion the brand is looking to elicit. “It’s not personal, it’s contextual,” says Allison Murphy, senior VP of ad innovation at the Times. It is expanding that into “motivation” ad targeting, which will be able to score content based on the likelihood that it will spur an action, and “topic targeting.” —J.P.

10 a.m. ET
Time for another GoT reference

“All sorts of terrible things happen in the dark,” says James Bennet, editorial page editor at the Times. —J.P.

The New York Times has been running ads about its new privacy project, which aims to delve deep into issues surrounding data, artificial intelligence, etc. When the audience at the TimesCenter this morning was asked who’s seen the ads, no hands went up. “OK, so our targeting is not that good,” chortled Meredith Kopit Levien, chief operating officer, The New York Times. —J.P.

The New York Times’ highly popular podcast “The Daily” hit 2 million listeners per day and has grown its staff from four people at the onset to 17. —J.P.

That’s been the most-asked question for “Work Friend,” The New York Times’ new work column. The answer: “No,” says Seb Tomich, global head of advertising at the Times.

Other popular Times content so far this year highlighted at the Times NewFront: a recipe on stew, an in-depth look at Rupert Murdoch’s empire and an episode of “The Daily” podcast that flashes back to 1994 politics.

Tomich opened the Times’ presentation with the publication’s current campaign tagline, “The Truth Is Worth It.”

At the YouTube+MediaLink NewFronts kick-off breakfast, MediaLink CEO and Chairman Michael Kassan declares that the word of the NewFronts week is “effective,” especially in regard to how marketers are working to figure out measuring addressable TV. Tara Walpert Levy, VP of agency and brand solutions at Google and YouTube, has one suggestion: “Create an offer that looks a lot more like TV,” she says on the same panel. “It fits into the way a brand does business.”

“Addressable television is back in the forefront, and we were talking about it seven years ago,” says @MediaLink ‘s @mkassan at the @YouTube+MediaLink kick-off breakfast #NewFronts pic.twitter.com/wMgLpXlngP

Netflix may insist it will never bring ads to its platform, but “That’s not what their recruiters say,” said Tara Walpert Levy, who leads agency and brand solutions at Google and YouTube, at the NewFronts kick-off breakfast hosted by MediaLink and YouTube. —I.L.

“The army of the dead are at the wall, and we’re still arguing among the houses.” @KLemkau re: the media revolution #NewFronts pic.twitter.com/Z5lvhOnhQa