Service Hailed as a Breakthrough in 2005
READ THIS NEXT
WhatsApp delays updated privacy policy after user confusion, backlash 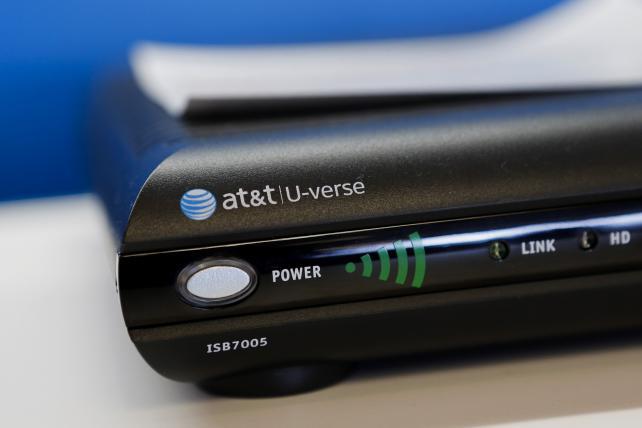 An AT&T U-verse TV system is displayed for sale at a store in Manhattan Beach, Calif., in July 2013.
Credit: Patrick T. Fallon/Bloomberg

AT&T is phasing out the U-verse TV service as it pushes new customers to newly acquired DirecTV, a sign the company is giving up on once-heralded plans to compete head-on with cable through telephone lines.

AT&T has stopped building U-verse set-top boxes and is nudging prospective customers toward its satellite unit, which has lower hardware and programming costs. The shift is the first stage of a plan to create a "home gateway" within three years that will consolidate all AT&T services and act as a central hub to deliver video to any device.

"AT&T is going to actively get out of the U-verse business," said Chris Ucko, an analyst with CreditSights Inc.

The de-emphasis of U-verse underscores AT&T's promise to squeeze $2.5 billion in annual cost savings from its purchase of DirecTV last year. The provider is under pressure to improve profit margins amid a wireless price war. It also faces $22 billion in capital spending, an estimated $10.6 billion cost to acquire new airwaves, about $6.5 billion in debt maturities and an $11 billion dividend this year, all while working to improve its credit rating.

Current U-verse subscribers will be able to retain the service, and AT&T is even offering new promotions to those who keep it. But new customers are being directed by its marketing department to choose the satellite package.

Fleeing customers
The shift to DirecTV was reflected in fourth-quarter results. U-verse subscribers fell 4%, the worst loss ever, as 240,000 customers canceled service, the company said. And while DirecTV gains of 214,000 customers almost offset the loss, U-verse defectors helped pump up cable TV growth. Comcast Corp. had its biggest user gain in eight years.

AT&T says that while it's focusing on DirecTV, it isn't shutting down U-verse.

"To realize the many benefits of our DirecTV acquisition, we are leading our video marketing approach with DirecTV," said Brad Burns, an AT&T spokesman. "However, our first priority is to listen to our customers and meet their needs, and if we determine a customer will be better served with the U-verse product, we offer attractive and compelling options."

Souped-up service
At its start in 2005, U-verse was hailed as a breakthrough product that was shepherded through development by Chief Executive Officer Randall Stephenson before he took the top job. Designed as an improvement from the dial-up internet era, it offered faster, souped-up DSL -- or digital subscriber line -- service that carried both TV programs and broadband access.

U-verse, along with Verizon's Fios, gave the phone companies the ability to offer a bundle of TV, phone and Internet services to chip away at cable's dominance. By 2007, AT&T was touting U-verse's picture quality and the higher number of HD channels it had compared with cable.

Unlike Fios, which connected homes with super-fast fiber-optic lines, U-verse took a lower-cost approach by taking fiber cables to a neighborhood and then connecting them to existing copper lines that reach into homes.

At its peak in 2014, U-verse had 6.1 million TV subscribers. AT&T lists 21 states where it's available. U-verse was never sold nationally and steered clear of the Northeast, where Verizon maintains a Fios stronghold.

"I don't think it worked really well to deliver high-end broadband and video over copper lines," Ucko of CrediSights said. "DirecTV gives them a better way to deliver video."

More clout
With DirecTV, AT&T gets a national TV offering and lower programming costs. DirecTV's 20 million subscribers give the parent company greater leverage in negotiations with media companies at a time of rising programming fees. Content costs are about $17 a month higher for U-verse customers than for DirecTV subscribers, Chief Financial Officer John Stephens said at an investor conference in November.

"The lower content costs makes DirecTV customers more profitable," said Jennifer Fritzsche, an analyst with Wells Fargo Securities. And if the TV feed can move to satellite, it takes the data traffic load off the U-verse broadband pipe, she said. "Then AT&T can sell faster broadband speeds for higher prices."

AT&T is hoping to combine its services -- internet, satellite TV and wireless -- into one home device. As a potential part of that plan, the company is investing in GigaPower, a direct fiber-to-the home connection targeting 38 cities in 20 states. Because not all homes will get fiber, AT&T is developing a single-layer multipurpose hub that will use various inputs to send Web-based streaming video, on-demand shows and live programs to home TVs and mobile devices.

U-verse, which is a vestige of the copper-wire era, may not fit that picture, says Wells Fargo's Ms. Fritzsche.

"U-verse was a first step; it wasn't a mistake," she said. "It got broadband into the home, but the future is fiber."