On National Taco Day, the fast feeder gets a little more than it bargained for
READ THIS NEXT
Facebook picks new CMO Alex Schultz from inside its ranks 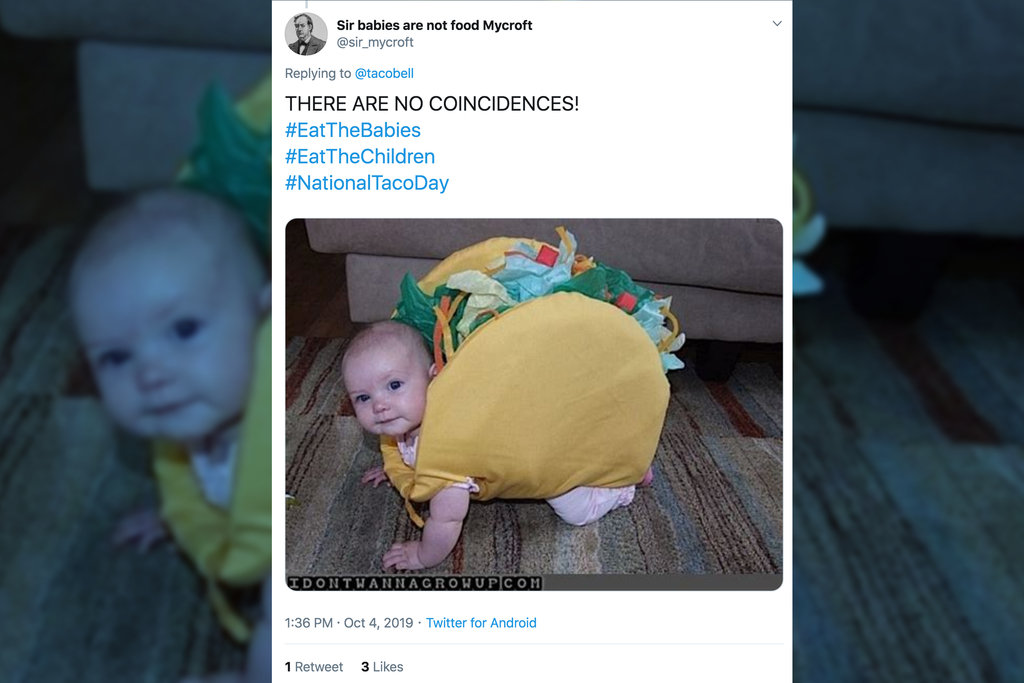 Of all days, Taco Bell found itself in a rather uncomfortable position on National Taco Day Friday.

It was a natural time to do some promotion against the trending hashtag #NationalTacoDay on Twitter. Unfortunately for Taco Bell—and for reasons even Twitter can't explain—the brand’s ads suddenly became served under two other trending hashtags: #EattheChildren and #EattheBabies. People were only too eager to point out the humor in the situation.

Although Taco Bell wasn’t promoting the hashtags, its ads—including a QVC-style video encouraging customers to order its National Taco Day $5 Gift Set online—popped up when people clicked on, tapped or searched for #EattheChildren and #EattheBabies.

Those hashtags originated Thursday when a protester at a town hall held by Rep. Alexandria Ocasio-Cortez in New York called for people to “eat the babies” to address the climate crisis—a solution borrowed from Jonathan Swift’s 1729 “A Modest Proposal,” which satirically proposed that England's poor escape poverty by selling their children to the rich as food. President Trump retweeted a video of the episode, calling Ocasio-Cortez a “wack job.” LaRouche PAC, a far-right group that supports Donald Trump, later said they were behind the protestor’s appearance.

Not fully understanding why the #EattheChildren and #EattheBabies hashtags were trending, many people were drawn into the conversation—some drawing a political connection between Taco Bell’s ads and the hashtags.

“Sorry Taco Bell, your support of the criminal in the White House earns you a pass from me,” wrote one Twitter user.

Some people had fun with the slip-up.

when you search why #EatTheBabies is trending and a @tacobell promo is served up as a result... #TheseArentTheBabiesYoureLookingFor pic.twitter.com/Po1Jw6gZEw

Others took the low road. “At least we know what type of meat they use now in them tacos,” wrote one user.

At least we know what type of meat they use now in them tacos. #EatTheChildren #EatTheBabies #Trump #Trump2020LandslideVictory

Leave it to Twitter to serve a Taco Bell ad in the #EatTheBabies hashtag feed. Is there something they're not telling us? pic.twitter.com/byxmiSxcyf

It’s unclear how the brand’s ads wound up being served with those hashtags. Taco Bell did not provide a comment in time for publication. According to a Twitter spokesperson, the platform identified the issue and blacklisted the hashtags globally for ads on search at 8:15 am, and isn’t aware of any other brands being implicated. It’s uncertain how long the ads showed up under the hashtags. Twitter uses a combination of machine learning, human judgement and placement control to determine the ads being shown across Twitter, the company said.