VW's 'The Force' Wins Online Battle of Super Bowl Ads, but What's That Worth? | Ad Age
Skip to main content
Sign In Register

VW's 'The Force' Wins Online Battle of Super Bowl Ads, but What's That Worth?

Plenty of PR, More Than $500,000 in Free Media So Far, According to Kantar Video
READ THIS NEXT
TikTok tactics: What to know about reaching audiences on the social media platform

NEW YORK (AdAge.com) -- The verdict is in, and Volkswagen's "The Force," starring 6-year-old "Little Darth Vader" Max Page, won the online battle of the Super Bowl ads by a long shot, with more than 20 million views on the web, according to analytics firm Kantar Video.

No surprise here; the video had racked up 10 million views before the game began, due to some aggressive promotion by VW. Now, days after the game, VW is in another league than any other Super Bowl spot: The No. 2 campaign, Doritos' and Pepsi Max's "Pug Attack," has accumulated 3.5 million views so far online and the No. 3 spot, Chrysler's "Imported From Detroit" anthem starring Eminem, has 3.3 million views. 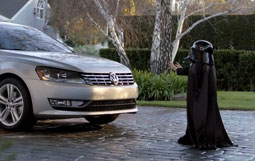 So what's that worth to VW? About $538,470 in free media when benchmarked against the $3 million cost for 30 seconds of time during the Super Bowl, according to Kantar. That's just what the impressions would cost to reach those additional people and doesn't include the PR value from the exposure and press coverage. But it's one way an advertiser can offset the media cost of the Super Bowl with free impressions on the web.

One could argue that those web impressions are more valuable because they represent a choice to watch, rather than a passive TV experience. "The Super Bowl laid the foundation; now they're getting additional impressions and conversation with the audience they are targeting," said Andrew Latzman, senior VP of research at Kantar Video.

Kantar measured 195 placements of "The Force" around the web. Combined with Volkswagen's other Super Bowl ad, "Black Beetle," the carmaker has earned more than $600,000 in free media so far. Viewing of the VW ad hasn't slowed down much. YouTube is counting 26 million views on the ad as of Friday; Kantar's tally, which included YouTube, stopped Wednesday, meaning the video has accrued at least another 6 million views since then.

But just like the views dropped off after Volkswagen's mega-hit, so does the value of the free media. "Pug Attack" generated a little less than $100,000 in media value and "Imported From Detroit" $90,000. Overall, the top-10 Super Bowl ads on the web have generated more than $1 million in media value since the game.

Interestingly, the most-watched ad on TV, indeed of all-time with 120 million views, according to Nielsen, didn't fare as well on the web. Chevrolet's "Wild Ride" didn't make the top-20 on the web, showing that while ads get a boost on TV, they succeed or fail on the web on their own merits.

But another issue is whether "The Force" is succeeding in building allegiance to VW or selling any cars. The ad was the most-liked, according to a Nielsen poll, but it wasn't even in the top-10 of most-recalled ads after the game. Fortunately for VW, it has a second chance on the web. It will be interesting to see if "The Force" has any staying power, and what VW and its ad agency, Deutsch, do to keep the meme going in the coming weeks.

Below you can view the full list from Kantar and watch all the Super Bowl spots in Ad Age's Super Bowl ad widget. 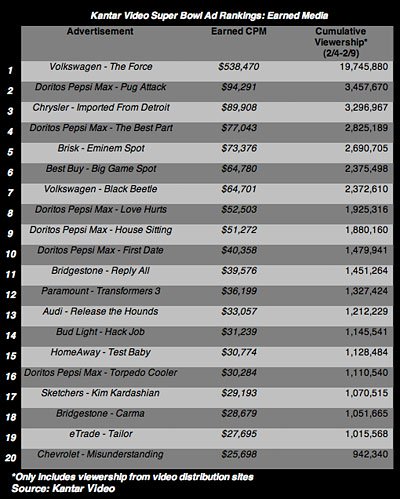 Mini: "Cram it in the Boot"
Butler Shine Stern & Partners

Cars.com: "Reviews Are In"
DDB Chicago