But a Betamax vs. VHS Format War Awaits
READ THIS NEXT
You Can't Stop Instagram Bots by Looking. Brands Have to Stop Buying Them
B.L. Ochman
Credit:
In Japan QR codes -- two-dimensional images containing encoded data -- are found on everything from business cards to kumquats. They are soon to be ubiquitous in the West in advertising and marketing, and in New York City garbage trucks are leading the way.

In mid-July, QR, or quick response, codes began appearing on the sides of 2,200 New York City Department of Sanitation trucks.

Having QR codes all over town will hopefully remove much of the nerd-factor from the QR code scan, and demonstrate to tens of thousands of New Yorkers, ranging from tech-savvy to Luddite, the potential rewards of engaging with the codes.

Scanning the codes with a mobile phone will take users to a video from the NYC Media show "The Green Apple: Recycling." The videos, produced by Howcast will also be broadcast on the city's flagship TV station, NYC Life (channel 25 locally). 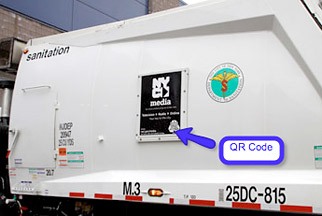 QR code platform wars
Just like the VHS vs. BetaMax wars in the early days of video, several platforms are vying for QR-code dominance. Each has its own unique twist and challenges.

The QR codes on the garbage trucks require people to download a program that will scan a photo of the code and use the data it contains to lead users to the campaign's videos.

However, QR codes that require nothing more than sending a text message are also vying for adoption.

I'm betting that text-message-based 2-D codes, which require no download, will win and become the standard way to deliver mobile QR data.

How app-based QR codes work
Application-based QR codes require the user to download an app to their phone, take a picture of the code on an ad, product, website or label.

To read the QR code, a user simply launches a reader application on their mobile device and takes a picture of the image.

The reader software will then trigger the appropriate response, which can include anything from launching a URL in the phone's browser to streaming a video or MP3.

The app scans the photo and directs the user to a server, which can deliver content download, a message or link, a video, a coupon, a registration form, a mobile payment, or a multimedia combination of information.

Leaders include Microsoft TAG, ScanLife, Nokia Reader and StickyBits, among others.

How SMS-based QR codes work
Text-based (SMS) 2-D codes perform all the same functions, but do not require the consumer to download an application prior to use.

Using SMS, 2-D codes deliver video, audio, images and text to both smartphones (25% of mobile users) and standard phones (75% of mobile users). Leaders include JagTag, whose recent promotion for Sports Illustrated generated 120,000 responses -- with 24% of requests coming from smartphones, a response share much higher than the 17% of mobile phones in the U.S. in that category.

Integration is key
Like any tool in the social media toolbox, QR codes are most effective when placed throughout an integrated campaign which includes print ads, in-store displays, direct mail, websites and even iPad ads.