I Was a Pregnant CEO | Ad Age
Skip to main content

I Was a Pregnant CEO

What Marissa Mayer Can Expect As a CEO and a New Mom
READ THIS NEXT
You Can't Stop Instagram Bots by Looking. Brands Have to Stop Buying Them
Susan Cantor

In 2005, I was pregnant with my third child when I was named CEO of Lowe New York, a division of Lowe Worldwide, an Interpublic company. At the time, I thought it was particularly visionary of my company to give me the CEO title, knowing that in just a few months time I would be heading from the boardroom to the delivery room. And in 2012, I think it is similarly courageous of Yahoo to hire a pregnant woman to lead the company.

The situations aren't entirely the same; I was a known commodity to Lowe when I was elevated to CEO, while Marissa Mayer is a newcomer to Yahoo. Lowe New York had about 400 employees at the time compared to Yahoo's 12,000 and of course was not subject to the same kind of intense public scrutiny. But as one of possibly just a handful of pregnant CEOs, I have sense of what Mayer is about to go through.

I committed, at the time of my appointment, to return to work in a month's time. I had taken 12 weeks with each of my other two daughters, and I thought it was possible to return in four weeks, but only with the necessary reinforcements at home. Interpublic gave me the time, resources and moral support that I needed, and in return, I kept my promise to return to the office just four weeks after giving birth.

I remember at the time having a sea of conflicting feelings. I had never before been conflicted about work. I was entirely dedicated to my job and equally dedicated to my children and I always thought I did a rather good job at both. But after only four weeks, and for the first time in my career, I felt stress about leaving my baby and resentment for my place of employ that was forcing me to leave her. My subsequent advice to women who ask me what to do about maternity leave is , "Take 12 weeks!" In my heart, I think this is the right amount of time to bond with your child, get your business head back and re-enter the fray.

But when occupying the CEO suite and competing in a man's world, not to mention taking on one of the most visible and challenging jobs in America today, a woman does not have the luxury of time and space to recover. Mayer will need to show she has the mettle, drive and determination to chart the future and move Yahoo forward. In taking the CEO position and committing to return to work shortly after giving birth, she clearly understands this. She, like other women who have preceded her and helmed companies during personally and professionally challenging times, will need to rise to the occasion and make the not-so-comfortable decision to work when she'd rather sleep and lead when she'd rather not.

If my experience is a barometer, the next six months will be exceptionally difficult for Mayer. More difficult than she can even anticipate, given this is her first child and her first shot at running a company, a very troubled one at that . But if anyone is up to the challenge, in my view, it is a new mom, at the very start of building her family and making her mark, armed with the belief that anything is possible. I believe this is what gave me the strength to return, focus and run Lowe New York and subsequently build my own company. I knew, and still do, that if I could build and nurture a family while being CEO of a company, I could do anything. 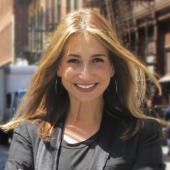 Susan Cantor
Susan Cantor is CEO of Red Peak, a brand strategy and design agency.
Follow View all articles by this author