Branded, British-Themed Headphones Are Too Tempting Not to Wear

U.S. rapper Dr. Dre is the latest marketer to cross the Olympic police line, with an ambush marketing campaign for his Beats by Dr. Dre headphones brand.

Dr. Dre has created headphones in Great Britain's national colors and handed them out to a number of British athletes at the London 2012 Olympics. 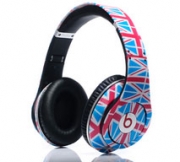 Jack Butland, the 19-year old goalkeeper for the Great Britain soccer team, was lucky enough to get a free pair of the headphones, which normally retail for around $400. He tweeted a couple of days ago, "love my GB Beats by Dre. [The reps] are around. I'm sure they'll bump into you guys soon."

British tennis player Lara Robson has also tweeted about them, according to The Guardian. The tweets have since been removed, and it is unclear whether athletes have been asked to refrain from wearing the headphones.

U.S. swimmer Michael Phelps has been pictured wearing Beats by Dr. Dre headphones at the 2012 games, and in the past, so it is unclear whether he has personally been part of the ambush campaign. The Aquatic Center at the Olympic Park in London is a very noisy venue, and many swimmers have been wearing headphones to block out the noise from fans in the 17,500 seats as they try to focus on their performance.

The International Olympic Committee did not answer requests for comment by the time of posting, but yesterday put out a statement in defense of Rule 40, which prevents athletes from mentioning brands that aren't official sponsors on social media, in response to the #wedemandchange campaign by U.S. athletes demanding a less restrictive approach to marketing around the games.

The statement said, "Corporate sponsorship provides essential support for competing athletes and contributes to the overall success of the Games. Put simply, without the support of our official commercial partners, the Games would not be able to happen."