For Heineken, Formula 1 is 'More Than a Race' | Ad Age
Skip to main content

For Heineken, Formula 1 is 'More Than a Race'

Heineken's $200 million Formula 1 sponsorship kicks off this weekend at the Milan Grand Prix, spearheaded by a TV commercial that urges racing fans, "When you drive, never drink." 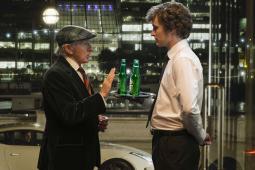 The deal between the brewer and the global motorsport brand attracted controversy from public health campaigners when it was announced in June. The Heineken launch spot's strong stand against drinking and driving could be seen as a response to critics of the partnership.

Anuraag Trikha, Heineken's global brand communications director, said, "It's a natural question to ask our point of view on drinking and driving. For Heineken, it's an obligation and an opportunity to promote responsible behavior, because people do want to listen to a brand like us. We are the only brewer to show people rejecting our own product."

Created by Publicis Italy, it is a convincing re-creation of Mr. Stewart in his early 1970s heyday, in which he is seen winning races and enjoying the jet set Formula 1 lifestyle, while courteously refusing bottles of Heineken every time they are offered to him. The soundtrack is a version of David Bowie's "Heroes" by Postmodern Jukebox featuring Nicole Atkins.

In the final scene, the real Mr. Stewart, now 77 years old, appears at a glamorous party. When a waiter offers him a Heineken, we expect him to enjoy a drink at last – but he refuses once again. "I'm still driving" he says, with a nod at his flashy sports car parked outside.

A second spot, which will be released next week, features another British driving ace, David Coulthard. It focuses on the "More than a race" positioning at the center of Heineken's sponsorship, and shows Mr. Coulthard introducing a first-timer to the delights of the A-list Formula 1 experience, from helicopters and yachts right down to the grease and deafening noise of tire changes in the pit lanes.

As the time frame has been so tight, the wider campaign is still a work in progress. The plan is to develop a social media activation that brings the "More than a race" proposition to life. Heineken is in talks with Uber about offering free rides after races, and this week staged a soccer match between European players and Formula 1 drivers which was broadcast on Sky TV.

"We want to find a way to add value to the sponsorship and not just be a badge associated with the prestige of Formula 1," Mr. Trikha said. "It's not just a two-hour race, it's a whole 72-hour experience that takes over an entire city, with so many facets: glamor, sociability, technology and performance, as well as the drivers themselves."

The brewer hopes the sponsorship will help introduce the sport to a younger audience. "We will add a layer of sociability and excitement that will take Formula 1 beyond hardcore racing fans," Mr. Trikha promised. "There's often a perception that it is too technical and it's all about who comes first, but we will show that you can get involved in so many different ways. "

Formula 1 stages races in 21 countries, and claims to have had 400 million unique television viewers in 2015. "Formula 1 has ambitions to be the definitive global motorsport. The U.S. journey is important for them and for us," Mr. Trikha added, referring to the fact the Formula 1 is not as popular in the U.S. as in most other countries, because of the dominance of IndyCar racing.

The Formula 1 sponsorship ties in with Heineken's umbrella "Open your world" positioning, which also emphasizes the brand's global presence.

A campaign starring actor Benicio del Toro launched the new strapline in February, showcasing the first major work for the brand from Publicis Worldwide after it replaced Wieden & Kennedy as Heineken's lead agency in June 2015.

Publicis Italy is the lead agency globally on Heineken. Its CEO and executive creative director, Bruno Bertelli, is also chief creative officer of Publicis Worldwide, and has worked on the Heineken business for 17 years.

Mr. Trikha said, "Heineken as a brand is a whole galaxy of experiences to open your world, and sponsorship is also an important part of the message." The beer sponsors music festivals, European Champions League Soccer, and the Rugby World Cup, as well as Formula 1.

A former agency exec, Mr. Trikha grew up in India, where he began his career as a planner at J. Walter Thompson. He later moved to the agency's London office, where he discovered that being a planner wasn't enough for him. "I was a control freak. I wanted to control everyone, so I became an account man too, and went to work at Bartle Bogle Hegarty [in 2005] because John Hegarty was the only persona I wanted to work with."

In 2010 he moved to the client side with Heineken, where he has a central role in charge of all campaigns and sponsorships globally. With all that responsibility, is Mr. Trikha still a control freak? "No. I'm too old for that – it makes you age faster. I'm now the opposite. I delegate so much that people wonder where I am."

Heineken spent $104.6 million in measured media on the Heineken brand in 2014, the latest full year available from the Ad Age Datacenter, which uses Kantar Media figures.