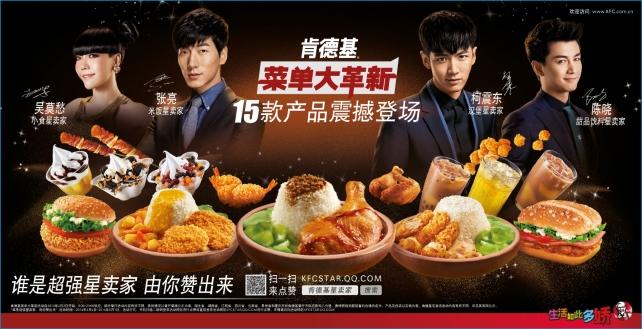 The stars of KFC in China
Credit:

In China, celebrity endorsements are the tried-and-true ad formula. And KFC – hard at work trying to revamp its brand in China -- is going with a full-on onslaught of not one but five celebs.

To put their collective star power in perspective: One of the actors involved has 72 million followers on Weibo, China's Twitter equivalent.

As KFC introduces 15 items -- 10 of those brand new and 5 relaunched -- in China, a digital campaign from Ogilvy Shanghai uses stars to represent new menu additions. (For example, a tender-hearted reality star plugs new rice-based comfort foods.) Then the celebs compete for "likes" on social media.

KFC is the country's biggest fast food chain, and the one that got to China first as the country was opening up. It's long been a textbook case of success on the mainland, with a 6.5% share of the local fast food market, compared to McDonald's 2.4%, according to 2012 figures from Euromonitor International. After 27 years, KFC has about 4,600 restaurants in China.

But the brand took a hit starting in late 2012 after Shanghai inspectors found too many antibiotics in chicken from several suppliers. An avian flu outbreak also scared consumers away.

The brand has come at the problem from all angles. (At one point, it used social media to encourage people to write poems about chicken.) In November, it introduced a campaign about food quality featuring employees and poultry farmers.

While using celebrities is the traditional recipe for ads in China, this one tries to modernize that strategy by getting the stars' Weibo fan bases involved.

"I think that more and more people are beginning to see through this 'cheap' tactic, and the brand will ultimately suffer as a result," he said. But if the celeb seems "genuinely involved in the message they become more believable, and this is what we are trying to do with KFC."

Ogilvy's campaign kicks off with online teasers before moving to TV.

It features Ke Zhendong, an actor and heartthrob with more than 29 million Weibo fans, plugging chicken burgers with the pickup line, "I can't buy you a castle, but I can buy you a burger." (The humor is lost a bit in translation, but castle and burger share a Chinese character.)

Chen Xiao, who plays a warrior monk on TV, will "surprise fans by going against his ascetic character to sell six kinds of drinks and deserts," Ogilvy said.

In a recent campaign done by Ogilvy, Mr. Ke and actor-singer Chen Kun (he of the 72 million Weibo followers) presided over a contest between original recipe and extra crispy chicken. KFC has said that contest racked up 20 million social votes, with the original recipe winning.

A top national executive for KFC's parent company, Yum!, noted that China is the world's biggest digital society (with 618 million people online) and that Chinese consumers are "moving at the speed of a bullet train."

Milind Pant, president and chief operating officer for Yum! China, wrote in an email that "urban Chinese are becoming the most digital savvy group in the world, offering opportunities for brands to innovate and communicate."

The menu revamp is part of what KFC has labeled its "restage," which includes new product packaging, uniforms, store designs, a mobile app, an e-menu and a prepay takeout offering.

KFC said also said it will update the menu every 12 months from now on.

Matthew Crabbe, Mintel Group's director of research for Asia-Pacific, said the brand had become so successful in China that "there was an edge of complacency in how they conducted their business."

"I think it's very difficult to steer such a big chain in a new direction," he said. "And it took this situation with the antibiotics to really force them into making some fairly dramatic changes … A complete revamp of the brand is a good idea."

CORRECTION: An earlier version of this article said there are 2,600 KFCs in China. There are about 4,600. Ogilvy, not a different agency as originally stated, handled the campaign involving the stars Chen Kun and Ke Zhendong.