Robert De Niro Pitches for Santander; NBA, Soccer Stars Show Off Their Skills for BBVA
READ THIS NEXT
Dispatches from the panicked GDPR frontline

It's hard to become a global brand if most U.S. consumers don't know your name -- just ask two giant Spanish banking groups spending big on advertising as a means to break into this market.

Santander and BBVA, both founded back in 1857 in northern Spain, are the No. 1 and No. 2 banks in their homeland and became household names in Latin America and parts of Europe after buying and rebranding local banks. Now they see the U.S., which accounts for only about 10% of their business, as a growth area.

Both wield large budgets, but each is taking a different approach with major campaigns. Santander is linking with a deliberately obnoxious Robert De Niro to raise its profile, while BBVA enlists major basketball and soccer stars to represent its agility.

He's talking to you
"We thought about who's a household name and aligned with our corporate values," said Kathy Klingler, exec VP-chief marketing officer at Santander, which bought U.S. bank Sovereign in 2009 and is now rebranding it under the Santander name. The "Taxi Driver" star was chosen because he is "an entrepreneur, a businessman, an Oscar winner," she said.

The $200 million effort includes a new website and ATMs, refurbishing more than 700 branches in nine states, and swapping signage from Sovereign to Santander. Ads by Arnold and Communispace kicked off in October. The De Niro commercial, which introduces a checking account called Extra20 Checking that offers a $20 monthly bonus if certain requirements are met, broke late last month.

In the spot, a voice-over promises that customers who open an Extra20 Checking account will be rewarded by going to a Robert De Niro film marathon and sitting with Robert De Niro. But Mr. De Niro proves an annoying companion, giving away the film's ending ("Everybody dies!"), panning other actors' performances and taking calls from his plumber. At the end, the voice-over tells customers to forget Mr. De Niro and grab the $20 monthly bonus instead. 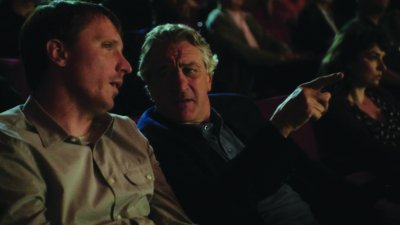 De Niro isn't a good fella to watch a flick with.

To prepare for Sovereign's rebranding as Santander, Ms. Klingler said the bank set up an online community of more than 1,000 U.S. Sovereign customers to help figure out how to translate the Santander brand for the U.S. She learned, for example, that customers didn't have negative associations with Santander as a financial brand whose home market is Spain, which was a financial train wreck after the global economic crisis started in 2008. "We didn't hear a lot of concerns from our customers," she said.

Given Santander's strength in Latin countries, which could mean greater brand awareness among U.S. Hispanics, some ads will be dubbed in Spanish.

Global campaign
Rival BBVA's U.S. effort is part of the bank's first global campaign, rolled out in October in the U.S., where the bank is called BBVA Compass. Early next year it will spread to most of the other 12 markets where BBVA has retail operations. To prepare, BBVA held a global account review in Madrid earlier this year, talking with holding companies including WPP and Omnicom Group. The bank chopped its roster to one creative and one media shop -- DDB and Mindshare -- from 28 agencies around the world, said Ignacio Moliner, BBVA's head of communications and brand. In another move, the bank in April hired Carlos Ricardo, a Brazilian working in marketing at Mondelez, as director of marketing, advertising and sponsorship.

Mr. Moliner's total global communications and brand budget is about $800 million, which includes corporate responsibility, PR and sales incentives as well as marketing, advertising and sponsorship. Advertising accounts for about 20% of the total. BBVA's three key markets are Spain, Mexico and the U.S., accounting for 29%, 28% and 10%, respectively, of the bank's gross income.

"Banking doesn't travel well," Mr. Moliner said. "It's not like chips. There are regulatory barriers and usage is very different. So our first global campaign isn't about specific products, but a way of understanding banking. We did more than 50,000 interviews. They all said the same thing: What I expect from my bank is simplicity, a seamless experience anywhere from any device -- mobile, tablet, PC, laptop."

To convey that, BBVA played up its role as official bank of the NBA and title sponsor of the BBVA soccer league in Spain. "There is a link to connect those two worlds [of banks and sports]," Mr. Ricardo said. "When you watch great athletes, they do incredible things that look easy. As a bank, we have phenomenal technology that allows people to bank on their phones and tablets. That was the connection."

In the campaign's big TV spot, NBA players like James Harden and soccer stars like Iker Casillas deftly twirl, flip and lob a laptop, a phone and a tablet to each other, demonstrating how customers can move seamlessly between devices. The spot has 24 executions, allowing countries to customize the screens, athletes and language.