Credit Card Purchases to Benefit Stand Up to Cancer

MasterCard is working with more than 90 businesses in New York's Times Square this holiday season to raise up to $1.5 million for Stand Up to Cancer. 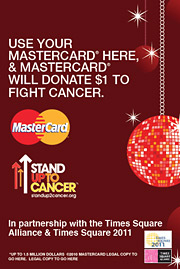 Through Dec. 31, the credit card company will donate $1 to Stand Up to Cancer for every MasterCard transaction made at one of the participating retailers, restaurants, theaters and attractions.

The campaign, created by Rusty Robertson and Sue Schwartz, founding partners of the Robertson Schwartz Agency, working with Stand Up to Cancer, the Times Square Alliance, Countdown Entertainment and MasterCard, is themed "A Day in the life of a Tourist." It targets visitors in key travel areas, such as airports, taxis, the Port Authority Bus Terminal and some Times Square hotels, including a PSA on guest room TVs. In addition, the two large Toshiba screens on top of One Times Square will display a PSA for the campaign throughout December.

The campaign is also being supported by print ads running in donated space from publications such as the Atlantic, Elle, Good Housekeeping, In Style, Maxim, Newsweek, Rolling Stone, Time and The Wall Street Journal.

The campaign, which started Nov. 26, will end with Stand Up to Cancer's participation in the New Year's Eve in Times Square ball drop festivities, the first time the program will have an official charity component.

Stand Up to Cancer was founded in May 2008 by a coalition of entertainment industry executives to raise money to cure cancer. Since then, it has made more than $83 million in grant commitments to projects designed to accelerate cancer research.