Inside Apple's New Campus: No Childcare (But You Can Freeze Your Eggs) | Ad Age
Skip to main content 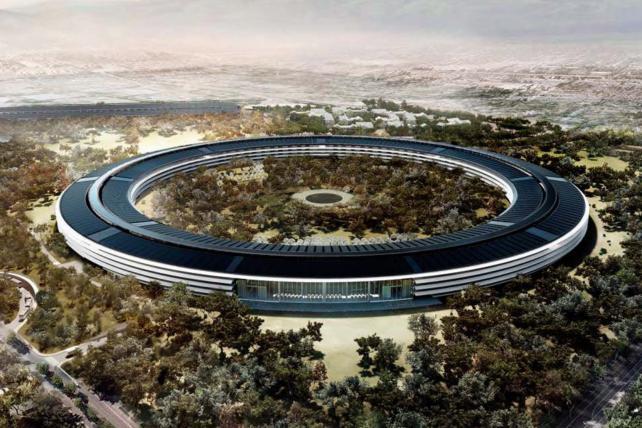 One 'ring' to rule them all
Credit: Courtesy City of Cupertino.

Apple Inc. is having a big summer. The tech giant unveiled Apple Park, its new $5 billion office-oasis in Cupertino. While looking forward, it's also looking back: The company is celebrating the 10th anniversary of the iPhone.

The iPhone has delivered on every bit of innovation and inspiration written into Apple's mission. Moving ahead, Apple's CEO Tim Cook has framed Apple Park as the result of a "100-year decision," the foundation upon which to build the company's future.

It's interesting to link the two. One would think a top-to-bottom reimagining of a work environment might bring the kind of change to humanity that Apple's most visionary product did.

One would be wrong: The new campus has no childcare. If one wants to, however, one has the option to freeze her eggs.

Wired Magazine writer Steven Levy is the only journalist who has thus far been allowed a peek inside what he has dubbed "The Mothership." The swoony, OCD-level dreamhouse specs offered up in Wired-- the 9,000 "drought-resistant trees" along with the 100,000-square-foot gym, immediately lit up the Internet.

In the piece, Levy quotes Tim Cook asking rhetorically, "Could we have cut a corner here or there?" Cook's answer: "It wouldn't have been Apple."

Cook added, "And it wouldn't have sent the message to everybody working here everyday that detail matters, that care matters."

Funny that Cook chose the phrase "care matters" given that the Mothership provides none itself.

Apple did not respond to several requests for comment on the subject for this article. But the lack of an onsite kid facility does send a retrogressive message.

Boys' club
"It's an incredibly sexist play," said J.G. Sandom, an investor and the CEO of the app Memorybox, who is also a single dad with primary custody of his daughter.

"If you do talk to companies that have childcare, 90 percent find that it's critical in recruiting and retaining their best workers," he said. "Not just women."

Indeed, despite lip service long paid to concerns about diversity and inclusion, staff numbers throughout the tech sector remain at about 70 percent white and male.

A woman I know, a single mom, who was hired to work at Apple at a director level, is not at all surprised.

"Apple is a boys' club and always has been," she said. "And single parents, or families that need two paychecks, are just not on their radar. My colleagues all had spouses who were at home full-time."

To be sure, not all working parents are in lock-step over the need for onsite care.

"I'd never want my child at work," a Connecticut-based single mom/ad exec said. "Most parents who can afford it prefer to have their children at home."

I asked her if that was elitist. She said, "It's Apple! They're elitist! And if you first have to go pick up your kid and go straight home, that separates you even more from grabbing a drink after work with the guys."

She has inadvertently put her finger on the Apple gestalt — fitting in with the guys.

"Managers want worker bees who resonate with them," another female former Apple employee told me. "At least with me, they didn't react well to female input. Is it a mother thing? I could never understand my reviews. And I felt like it was gaslighting. I guess that's classic sexism."

But one would think if any company can radically transform gender and racial biases in the workplace, to make the ranks of employees look more like the general population, it would be the visionaries at Apple.

But the lack of child-care in the new dream house shows the general lack of thinking about difference, and the 21st century need for equality and flexibility.

Sunny side up
Still, iPhone's fathers have worked out a sexy, technological solution to reproduction for women—Apple pays for the freezing and storage of female workers' eggs. (Two rounds.)

Frozen eggs are a great metaphor for the troubles at Apple: Let's engineer a way to keep those messy, demanding future humans in suspension, so everyone else can work round the clock.

"One of the reasons that inclusion continues to challenge organizations is because our individual blind spots keep us from recognizing when bias is hijacking our business results," said Allison Manswell, author of "Listen In: Crucial Conversations on Race in the Workplace."

"At some point, the dollar value of this oversight, and the missteps it creates" will "overshadow the confidence in the status quo."

Misstep-wise, the forced resignation of Uber co-founder Travis Kalanick has exposed the mistreatment of women in tech, particularly at start-ups. Increasingly, corporate cultures that are hostile to women, including Fox News, are in disarray.

And yet. These days, Apple only has one woman, retail chief Angela Ahrendts, among the top 11 executives who meet with Cook each week to determine the company's future. That hardly represents a worthy 100-year strategy.

Rather, it's a tableau set in amber, behind some dazzlingly architected curved glass, that forms a $5 billion boy-bubble. It's self-powering, self-sustaining and even earthquake proof. But the bigger question for the Mothership: Is it built to support new life?