Inflation is on the rise, spending is dropping and economists warn we’re entering a time of economic uncertainty. The inevitable response? Brands begin revisiting their Q3-Q4 plans, reviewing their budgets and cutting back where they can.

Yes, unfortunately, when times get tough brand marketing budgets often get hit first. But I believe—and history bears me out—that this is often a counter-intuitive decision. In good times and bad, brands still need to grow, and marketing plays a crucial role for businesses, especially during volatile times.

The evidence goes back decades that brands that keep their foot firmly on the marketing pedal weather economic downturns better than the ones that don’t. Further, Bain & Company's Sustained Value Creators analysis showed that in the Great Recession of 2007-2009, brand winners pulled away from losers and widened the profit and market-cap gap during the subsequent expansion. Those that acted aggressively during the downturn enjoyed a 17% compound annual growth rate (CAGR), compared with 0% among the losers.

The bottom line: Brands that experienced growth during those troubled times shared these three qualities:

2. They justified their budgets with measurable ROI.

3. They used a TV presence to build and grow their brand.

Let’s think about that last point a bit. According to the Harvard Business Review, “Brands that are out of sight on the television screen will sooner or later be out of mind for a large percentage of consumers. … Where opportunities are stable or uncertain (but leaning toward stable), firms should push their advantage.”

‘Meaningful’ spending remains strong
So, should you be concerned about today’s economic conditions? Of course, but here’s some key data that may lift your spirits: Consumer spending during special periods in particular remains strong. For example, according to the National Retail Federation, Father’s Day spending topped $20 billion this year, right in line with last year’s sales numbers.

In short, spending patterns can reflect either the sentimental nature of upcoming holidays or the frenzied preparations for a new season as consumers are prioritizing the purchase of meaningful gifts or necessary supplies.

These are good signs for enterprising brands: While consumers may be cutting back overall, they will prioritize spending when it matters most. Savvy brands will continue or increase their planned ad spend to take more market share, even while many of their competitors begin dialing things back.

This brings us back to television, specifically the connected kind. Connected TV (CTV) is more important than ever and is playing a key role for brands that want to take advantage of any opportunities during key consumer spending periods, particularly during economic turmoil.

Better targeting, less hassle
On CTV, brands are wasting less ad budget and targeting the consumers most likely to convert. Consider: 58% of streamers positively rate their viewing experience if the ads are relevant to them, according to a recent study by Hub Entertainment Research. In fact, relevance is even more important than high ad loads.

Real-time results show how ads are performing and who’s converting, giving definitive proof of a campaign’s efficacy, and protecting and proving the value of the marketing team and its budget. This information can be used to create a data-driven feedback loop, where brands deploy A/B tests or new creative. They then can measure performance, optimize further and redeploy before reviewing again to get as close to a “perfect ad” as possible.

The lesson: Keep your foot on the marketing pedal, measure and measure again, and take advantage of today’s powerful streaming technology. During good times or bad, CTV has opened the door to more targeted advertising with much less hassle. And with new technology like Performance TV advertisers have even greater insights and time to strategize the best returns.

MNTN builds advertising software for brands to drive measurable conversions, revenue, site visits and more through the power of television. MNTN Performance TV is the world’s first and only Connected TV advertising platform optimized for direct-response marketing goals. It redefines what advertisers can do with television, giving them the power to tie performance directly to their TV campaigns. 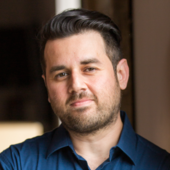 Ali leads all marketing and communications efforts at MNTN. Ali is also an instructor at UCLA Extension, teaching marketing and advertising courses in the Business & Management certification program. Previously, Ali served as principal product designer at Symantec working on the Norton Security line of consumer software. Prior to Symantec, Ali oversaw digital marketing for the Digital Media Services division of Verizon.