Sony named ‘world’s most hated brand’ and more bad news for Activision Blizzard—plus why Halloween is a big brand deal this year
READ THIS NEXT
Executives are backing away from ESG as recession risks mount
Credit: iStock

St. Jude Children’s Research Hospital: The organization took the top prize in the Association of National Advertisers In-House Excellence Awards ceremony. The marketing trade group praised a St. Jude’s campaign that leveraged YouTube personalities for a variety show/telethon that included participation from viewers around the world. It was created with outside agency Theorist Inc. That partnership earned a second award for St. Jude in the “Best Collaborative Effort” category.

Halloween marketers: After a COVID-filled year in which few kids attended parties or went trick-or-treating, Halloween is expected to make a big comeback this year. Consumer spending on items for the holiday is expected to reach $10.1 billion—a record and a 25% increase over 2020, according to a recent survey from the National Retail Federation. The report also found that 65% of Americans plan to celebrate Halloween this year, up from 58% last year and close to the 68% of pre-pandemic 2019. All signs point to 2022 being a good year for dentists.

Sports betting: Gambling brands continue to break through with mainstream marketing deals. The latest comes from Caesars Entertainment, which struck a pact with the NHL’s Washington Capitals that will have the team wear Caesars Sportsbook logos on team jerseys for home games starting with the 2022-23 season. The pro hockey league cleared the way for jersey ad deals in August.

Sony: The electronics conglomerate is the world’s “most hated brand,” according to product review site Rave. The finding was based on a research tool called SentiStrength that was used “to assess over a million brand-related tweets for positive or negative content,” according to Rave, which then calculated a hate rate (% of negative tweets). Sony was the most hated brand in 10 countries, followed by Tesla (7 countries) and Uber (4 countries, including the U.S.) KFC took the crown as the most hated fast-food brand. 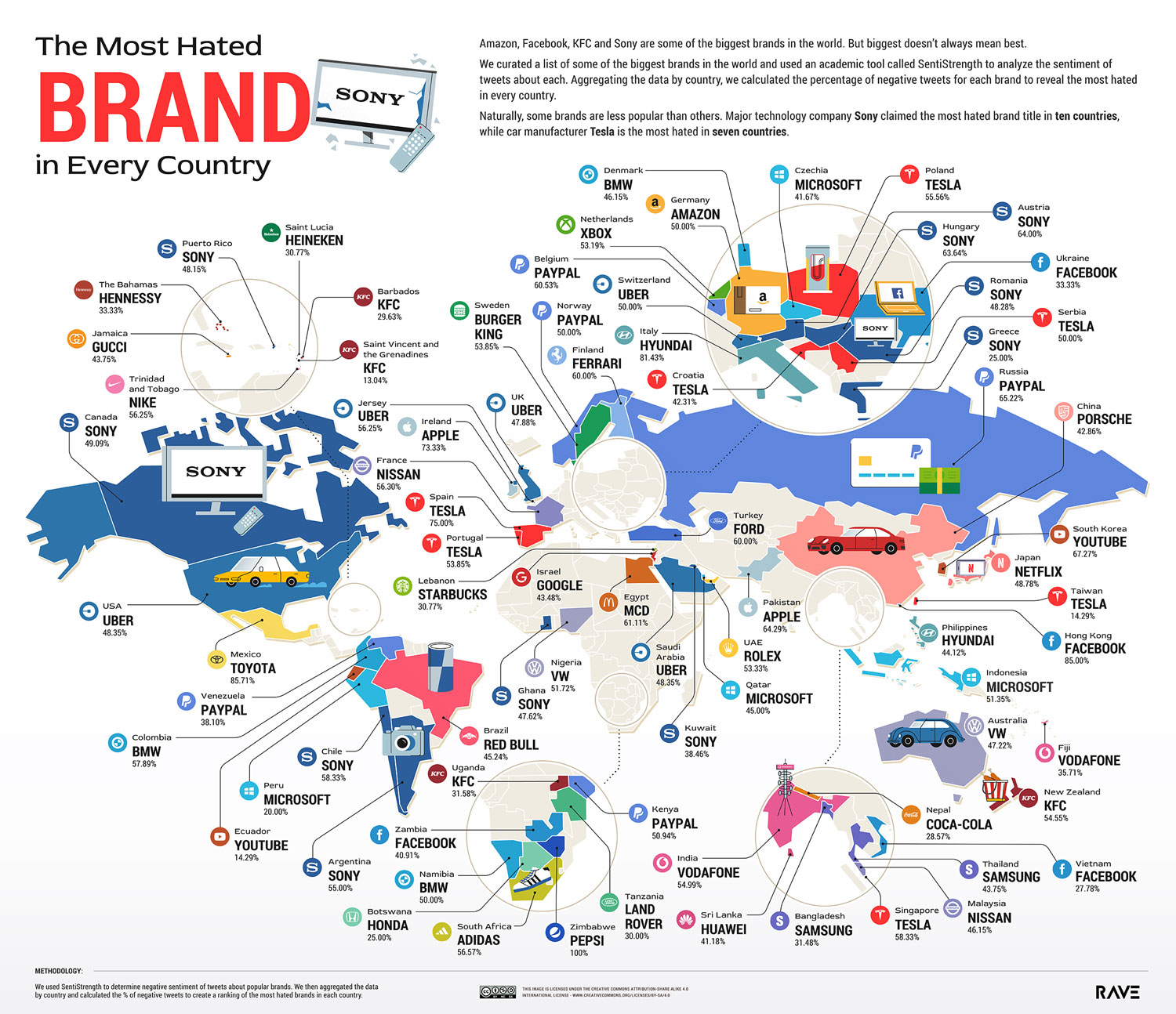 As for Sony, Rave says, “as an electronics manufacturer, gaming console brand and movie producer, the Japanese conglomerate is perfectly positioned to get under fans’ skin with every decision Sony’s execs make.” Of course, being “hated” often just means people are paying close attention, which is not always a bad thing. As Rave states, “the brands we hate the most are often the least vanilla. Better to divide opinion than to inspire no opinion at all.”

Activision Blizzard: The gaming giant is back in the headlines for bad reasons, with news that the Securities and Exchange Commission is investigating disclosures regarding workplace issues. CEO Bobby Kotick was subpoenaed, according to the Wall Street Journal, which reports that the commission is seeking information on “communications with other senior executives regarding complaints of sexual harassment or discrimination by Activision employees or contractors.”

Wieden+Kennedy: Proving that no accounts are ever truly safe, the agency must defend its KFC business with news this week that the chicken chain is putting its creative and media business up for review. W+K helped recharge the brand’s marketing after winning the account in 2015 and putting a new focus on founder and mascot Colonel Sanders. But with a new CMO coming on board soon, the chain apparently wants a fresh approach. The Colonel’s fate is TBD.

$100 million: How much South Korean food brand Bibigo is paying to put its name on Los Angeles Laker jersey patches in a five-year deal, according to reports. “The Lakers are more than just a basketball team. The Lakers, globally, are a cultural icon, especially for young people,” said Wookho Kyeong, chief marketing officer of CJ CheilJedang, the parent company of Bibigo, according to the L.A. Times.

Great graphic from @LevAkabas about how @PremierLeague jersey sponsors have changed since the league's founding. Check out:

1) Gambling's takeover
2) Beer and electronics have fully disappeared
3) Carmakers took a decade off, then came back pic.twitter.com/qrHHmVKhGO

“I had one agency come to me and say, ‘We want to be the purpose agency.’ “I said: 'Do you know how many agencies think that they’re the purpose agency? It’s not a defined and distinctive positioning if that’s what you really think you are.'”—former Procter & Gamble Co. exec Pete Carter, who has started a new agency consulting firm.

Executives are backing away from ESG as recession risks mount

Why Gatorade is getting into the gummies business