Panera Bread's VP of brand building on the chain's move to make its 'clean ingredients' story more delicious—and why it is downplaying 'Mother Bread'
READ THIS NEXT
Peloton to cut 800 jobs, hike prices and shut stores in sweeping overhaul
Credit: Panera Bread

Drayton Martin, the branding executive behind the consequential move by Dunkin' to drop “Donuts” as its last name in 2018, heard a lot of jokes from people when they learned she’d taken a similar role at Panera Bread last year.

“They said, ‘What are you going to do? Drop ‘Bread?’” she recalled.

For the record, the answer to that is a firm “no.” But that doesn’t mean consequential moves aren’t a part of Martin’s plans at Panera, the fast-casual bakery-café chain with 2,120 locations in 48 states and in Ontario, Canada (some of which do business as St. Louis Bread).

It’s been slightly more than a year since Martin joined Panera as VP of brand building, and customers of the chain are starting to see her stamp on it.

Panera looks, feels and even sounds a little different than it used to, and that’s no mistake: It’s part of an effort to better apply what Martin sees as the brand’s salient strength—the “clean ingredient” focus with which the chain led the restaurant industry—and make it work a little harder to show that clean ingredients, healthy eating and supporting the environment can also be “craveable,” exciting and fun. This, Martin believes, will widen the chain’s appeal from a group of very devoted fans who’ve long bought into that message, to others who might be on the fence, or viewed Panera’s historic focus on its ingredients as more prescriptive than enticing.

Brands on the rise

“There is a group of customers who absolutely love Panera. They have Panera tattoos, and mac-and-cheese tattoos, the whole thing, but that’s a smaller group [but] there’s a lot of choices out there, and the competition is only growing,” Martin said. “There’s also a lot of people out there who would say, ‘I like Panera’ Or they might say, ‘I’m not totally clear on what Panera is offering.’ And it is that opportunity, of going from a ‘like’ to a ‘love’ that this is about.”

The brand also has a new sonic logo included in TV ads, an opening fanfare that builds to a choral “oooh” as heard in the below new commercial from agency Mother. 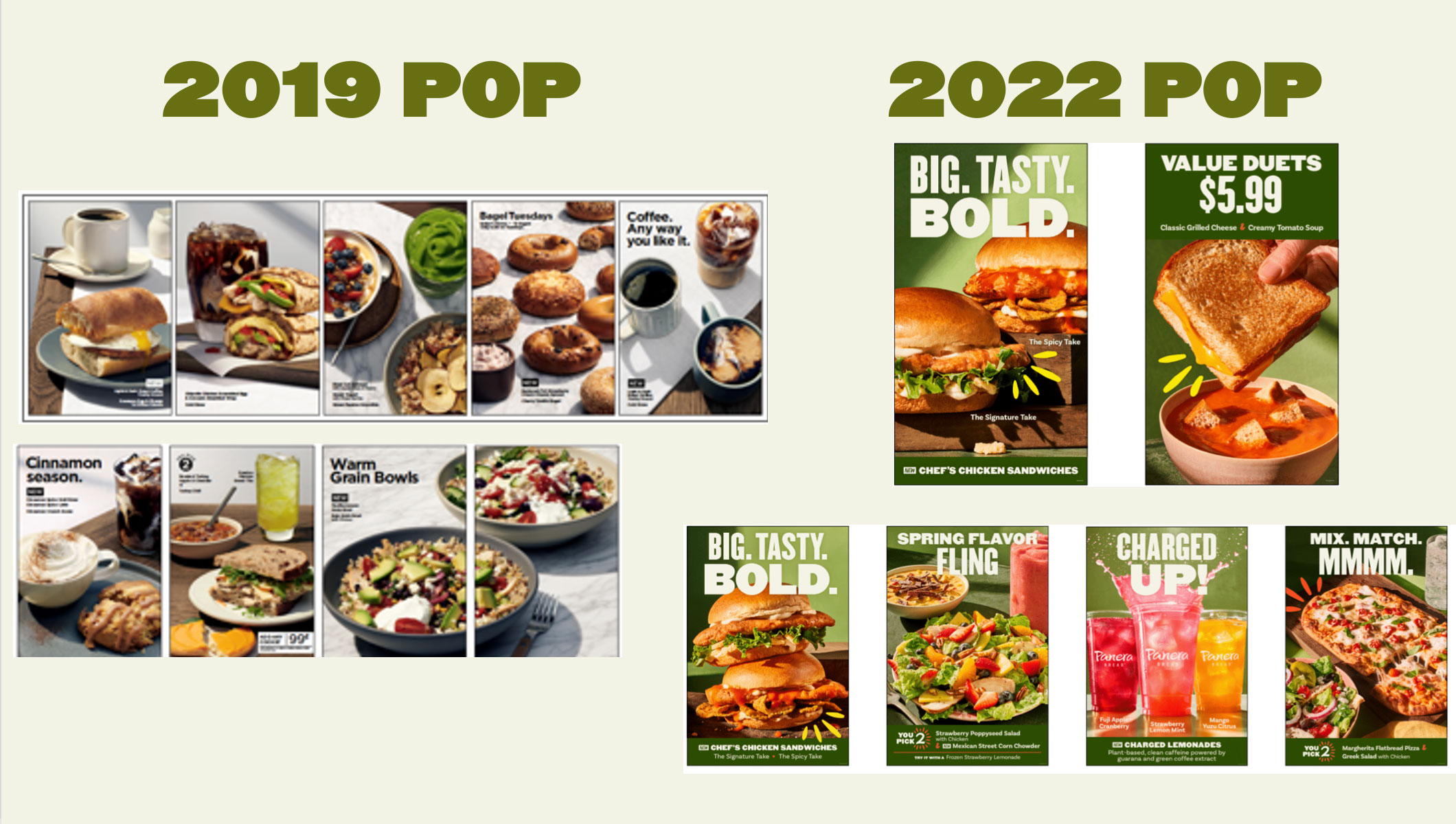 Martin is quick to note, however, that the chicken sandwich was approached in a Panera-like way, “reinterpreting” a popular fast food item in a way that aligns to its legacy strengths. It’s not fried, but grilled, for instance, and carries the name “Chef’s Chicken Sandwich.”

Martin is contemplative but decisive when asked about an impression that the look could resemble that of a fast-food offering. After all, Panera is in the more premium "fast-casual" category.

“I would say this is not an aspiration to be a QSR [quick service restaurant]. What it is, is—do you want to eat food that’s not craveable? So crave is really important, it’s part of the visceral impulse we want to evoke,” she said. “And if you look at the work before, it was spot-on for its time. We were reinforcing the ingredient story. The fact that it’s clean food. And we’re not walking away from that, but it doesn’t stop at ingredients. It extends to delicious meals and the impact of those delicious meals on yourself and on the planet.

“So for us, bringing that vibrancy and energy is really about being truer to what an eating experience should be, and what we work hard to do at Panera,” she continued. “So if you look at the bursts—that’s what we call those little things flying off the food that’s kind of a design cue to signal that visceral moment when you eat something that’s really good—that ‘Mmmm’? That’s the design cue.”

This same moment is meant to be evoked by the sonic logo, developed for the company by Made Music Studio, which Martin says “simulates a great eating experience.” The horns it begins with represent anticipation, and the choral delivery at the end is “affirmation and satisfaction.”

Consumer insights from the restaurant data and consultant firm Technomic would seem to support Martin’s contentions.

Robert Byrne, Technomic's director of consumer and industry insights, said the firm’s consumer studies show Panera’s food rates highly, but the temptation offered in its advertising less so. “Since Panera ratings for ‘advertising makes me hungry’ are among the lowest for the segment, there is definitely opportunity to tap into that guest equity from a promotional standpoint, for sure,” Byrne said.

Gordon is referring to a never-ending series of what he calls “black swan” events, starting with the pandemic, that amounted to one calamity after another for the sector and continues on with the effects of the Russia-Ukraine war, hyperinflation and gas prices. It includes a beaten-up stock market that last week caused Panera Brands to call off a planned reverse merger with a special-purpose acquisition company headed by restaurateur Danny Meyer’s Union Square Hospitality Group. The merger plan, announced last November, was meant to take the company back onto the public markets for the first time since 2017. (Panera Brands also controls the Einstein Bros. Bagels and Caribou Coffee chains.)

JAB Holdings, a German holding company that took Panera private in 2017, will continue to own and operate the chain. Niren Chaudhary, CEO of Panera Brands, in a July 1 statement said prolonged unfavorable conditions convinced the parties not to extend plans to make the deal beyond a June 30 deadline. He said, however, that Panera would still explore an IPO when market conditions improve.

While conditions remain challenging for all restaurants, Panera is relatively fortunate among them to have a message that’s new, and positioning relatively less affected by those dropping out of the channel due to economic conditions, such as lower-income consumers, said Gordon.

“Historically, it’s been good for restaurants when advertising to have something new to say—new products, new news, new concepts,” he said. “The conditions generally have been awful for restaurant margins. But having a new look is never bad, and Panera to me seems to be making news,” referring to the recent chicken sandwich launch and expansion of a paid unlimited-coffee offering that’s since been extended to other drinks, supporting loyalty and trip frequency.

There are parts of the Panera brand for which the chain’s shifting emphasis may no longer appear quite as prominent.

“Mother Bread,” Panera’s name for the illustration of a woman baker with flowing hair—and a reference to the term for a sourdough starter, which has been a part of all Panera restaurants for 30 years—isn’t gone completely. But she will no longer be quite as prominent a symbol, relegated to represent Panera’s bread, and no longer necessarily showing up alongside its wordmark.

Extensive analysis of all the brand’s “design vocabulary” revealed its most important associations with consumers were its wordmark, the color green, and bread, said Martin. “Mother Bread was less of association, but it didn’t mean she wasn’t an association,” Martin added. “It just meant that we needed to give her more purpose, and so that’s why tying her to bakery was critical.”

Martin said she is confident the changes underway will be welcomed by customers, and the time to do so is now. By the first quarter of next year, changes will reflect new food packaging, uniforms, and a rolling program of interior renovations will be underway.

“We’re not some pedantic geometry teacher lecturing you which equation to use. We have this big tent, we’re inviting people in,” she said. “It starts with the fundamental idea of a healthier and happier world, and for us, the question is ‘how does that come to life?’”

While design can be one way to influence consumer opinion, Panera’s ultimate goal is a difficult one to achieve by any means, noted Jonathan Maze, editor-in-chief of Restaurant Business, an industry trade journal.

“Panera’s strength has always been its perception as better fast food: better ingredients and healthier. But people want good food,” Maze said. “Finding a way to convince folks that its food is actually delicious is like the Holy Grail.”

Jon Springer is a Senior Reporter for Ad Age, covering food and CPG marketing. He formerly covered the food retail industry for Winsight and Supermarket News, and is a former sports and features writer for The Cecil Whig, a daily newspaper in Elkton, Md.