What Everyone Is Talking About

NEW YORK (AdAge.com) -- Celebrity baby photos are still all the rage, but with magazines such as Vanity Fair getting first dibs, tabloids are finding that they're harder to come by. Nonetheless, this week In Touch gleefully trumpeted its pics of Anna Nicole Smith with her new bundle of joy. 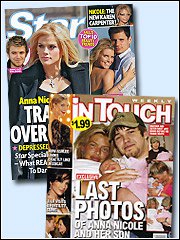 The tabs this week look at the death of Anna Nicole Smith's son.
Watercooler vaguely remembers shots of a pregnant Smith, and doubts there would have been much fanfare for these baby photos if not for their tragic undercurrent: The birth of Smith's daughter was followed by the death of her oldest son three days later in the hospital room while visiting his mother. Smith reportedly sold the photos, taken the night before her son died, to pay for the funeral expenses. In the bidding war, Getty Images sold the photos to In Touch for a reported $400,000.

The tabloids have already put considerable ink down about Smith and her son Daniel since his death Sept. 10 in the Bahamas, where Smith gave birth. After a second autopsy could not determine the cause of death, the mystery has left the tabs to put their own spin on the drama this week. Naturally, In Touch plays up its claim to seven pages of family portraits captured before Daniel's death. The magazine points to a tragic combination of sleeping pills, anti-anxiety pills and antidepressants as to what might have caused the death of the 20 year old.

Star tries to investigate what really happened to Daniel, questioning if the cause of death was an overdose, though after giving a rundown of Smith and her son's relationship, it tells readers to stay tuned to an inquest Oct. 23 to find out the truth. Life & Style also attempts to delve deeper into the drama, but the mystery is bigger than it can deliver and it, too, tells readers to await the inquest.

Apparently, we are still in the wake of baby Shiloh and her fabulous debut. This week, Getty Images confirmed that the photographer was Brent Stirton, while the Associated Press informs us that money from the photo shoot will go to Global Action for Children and Doctors Without Borders. So now you have your post-Shiloh closure. As for the current emotional state of the relationship between Shiloh's parents, Angelina Jolie and Brad Pitt, and whether they are expecting again, don't hold your breath for any resolution any time soon.

Meredith Deliso
View all articles by this author