Ad Age's Magazines of the Year 2016: See All the Winners | Ad Age
Skip to main content
Sign In Register

Ad Age's Magazines of the Year 2016: See All the Winners 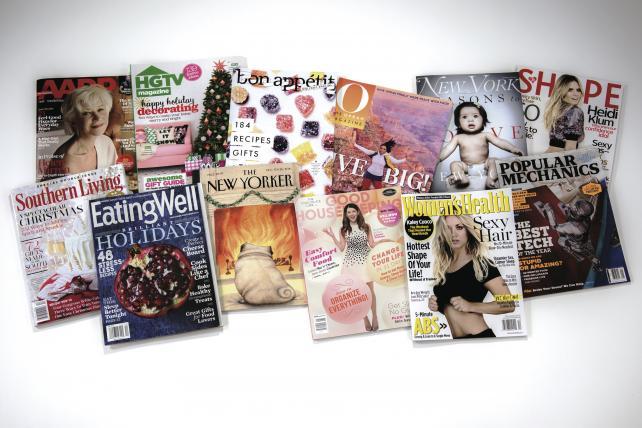 The truth is, there are countless Silicon Valley startups, propped up by venture capital, that would kill to have the revenue of any of the magazine brands on our 2016 Magazines of the Year list.

Starting with The New Yorker, which is the Magazine of the Year (read our story here), and followed by the diverse range of titles (presented below in alphabetical order) that round out our list, these are modern content brands that are mastering print and digital. They're iconic, they're beloved by readers and advertisers and, get this, their bottom lines are about generating actual revenue. --The Editors

AARP Editorial Director Myrna Blyth knew exactly what she was doing when she installed Robert Love as editor-in-chief of flagship AARP The Magazine back in mid-2013. The Rolling Stone veteran has brought fresh energy to the massive monthly, perfecting a mix of incisive reporting, smart service pieces and in-depth cover interviews of iconic nonmillennials, including Bob Dylan (yeah, the guy who snubbed the Nobel Prize committee happily spoke to AARP The Magazine), Diane Keaton, Warren Beatty, Cyndi Lauper and, for the latest issue, Helen Mirren (the magazine feted her with a luncheon at the Museum of Modern Art earlier this month). Circ is up to 22.5 million (with readership topping 37 million for the first time, according to the latest MRI study), and under VP-Group Publisher Shelagh Daly Miller, print revenue edged up 1% year-over-year even as digital grew 5%, with new advertisers from Apple to TD Ameritrade coming on board.

Bon Appétit continues to sizzle. Print ad pages are up (7% year-over-year) for the third year in a row, and at Condé Nast's Food Innovation Group sites, lead by BonAppetit.com and Epicurious, unique visitors surged to an all-time high of 55.8 million in October (up 37% year-over-year). The print product under Editor-in-Chief Adam Rapoport is a delight, with fun executions (e.g., the Culture Issue feature well shot entirely using iPhones) and surprising takes (e.g., "Welcome to Hillstone, America's Favorite Restaurant," a feature story that unironically celebrated a casual-dining chain). It's all working: In 2016, under Publisher-Chief Revenue Officer Pamela Drucker Mann, the Food Innovation Group set new revenue records across print and digital.

It's been a great year for Meredith's EatingWell, which kicked off a handsome redesign with its January issue under Editor-in-Chief Jessie Price and Creative Director James Van Fleteren, and then brought on a new publisher, Andrew Amill, this summer. Ad pages for the year will top out at a remarkable plus-41% versus 2015, and the November-December issue is the biggest in the title's history. And in what's arguably the most ambitious magazine brand extension of 2016, EatingWell partnered with Bellisio Foods to launch a line of EatingWell healthy frozen entrees (e.g., preservative/antibiotic-free chicken in a harissa tomato sauce with couscous and garbanzo beans) into more than 5,000 stores in September.

Hearst's Good Housekeeping is not only growing in print (ad pages are up 2% versus 2015, with new advertisers ranging from Estée Lauder to Swanson) and digital (in October, GoodHousekeeping.com had 11.2 million unique visitors, the best month ever), it's building on its already legendary authority in the marketplace. In October, under Editor-in-Chief Jane Francisco and Senior VP-Publishing Director and Chief Revenue Officer Patricia Haegele, the brand introduced the Good Housekeeping Nutritionist Approved emblem, expanding on the iconic Good Housekeeping Seal. Products vetted by the rigorous GH Nutrition Lab so far include Dole organic baby spinach and Garden Lites banana chocolate chip muffins.

In its fifth-anniversary year, HGTV, a joint venture between Hearst and Scripps Networks Interactive, keeps on building. Under Editor-in-Chief Sara Peterson, the monthly has found smart ways to complement the cable network's programming with sweeping themes (e.g., the Paint Issue in June, the Makeover Issue in September) that blend service and inspiration. The magazine's delivering a bonus of 7% on its 1.25 million rate base, and under Publisher Dan Fuchs, ad pages are up 8% versus 2015, with big gains in beauty and pharma.

If New York magazine didn't still put out such a damn fine print product, we might be tempted to kick it off this list, given how digital-first (now 60% of overall company revenue) it's become. But under Editor-in-Chief Adam Moss, the glossy part of the business in 2016 felt just as urgent and necessary as ever, with cover stories such as "Fox & Prey," Gabriel Sherman's take on the Roger Ailes saga, and "Our Democracy Has Never Been So Ripe for Tyranny," by new contributor Andrew Sullivan. Meanwhile, traffic to Nymag.com surpassed 20 million unique visitors for the first time (in October), and verticals Daily Intelligencer and The Cut (which landed former Allure chief Linda Wells as its new beauty editor-at-large) have become big media brands in their own right. We also salute outgoing Publisher Larry Burstein, who announced last month that he'll step down when his replacement is found. He has, for 13 years, presided over the multimedia reinvention of the legendary city magazine's once print-centric model.

While many women's (and men's) magazines across the industry have been soft or down this year, O, The Oprah Magazine, the Oprah-Hearst joint venture, grew revenue by 4% under Senior VP-Publisher and Chief Revenue Officer Jayne Jamison, driven by a 1% increase in print ad pages, still-robust single-copy sales (averaging 189,000 per month) and digital (Oprah.com is up 8% year-over-year to 3.6 million monthly uniques). The magazine is overdelivering on its rate base of 2.35 million, and under Editor-in-Chief Lucy Kaylin, it's been burnishing its high-profile masthead, this year adding Elizabeth "Eat, Pray, Love" Gilbert and CNBC financial expert Farnoosh Torabi as regular contributors.

It's no surprise that under Editor-in-Chief Ryan D'Agostino, Popular Mechanics has put new emphasis on narrative. He joined the monthly in 2014 from Esquire, where he was articles editor, which has resulted in stories such as this February's "No! No! No! They Don't Mean the Shuttle! They Don't Mean the Shuttle!" a riveting oral history of the loss of the Challenger space shuttle. But the core service journalism remains strong, and the 114-year-old monthly feels cooler than ever, thanks to strategic initiatives such as its partnership with the Academy of Motion Picture Arts and Sciences for the pre-Oscars Sci-Tech Awards. Under Publisher-Chief Revenue Officer Cameron Connors, ad pages are up 6.5%, with new advertisers including Axe, Benjamin Moore, Dolby and Slack coming on board.

Meredith acquired Shape from American Media in January 2015, folding its own Fitness into the competitive title to create a powerhouse glossy with a 2.5 million rate base. It was a bold move that's been paying off. Editor-in-Chief Elizabeth Goodman Artis, a Condé Nast, Hearst and Rodale veteran (who also worked at Fitness earlier in her career), has strengthened and clarified her magazine's mission, particularly by launching Love My Shape, "created to inspire women to be proud of their unique physique," in partnership with the Movemeant Foundation in the spring. And Senior VP-Group Publisher Christine Guilfoyle has been on a tear, growing ad categories including beauty, automotive and packaged goods to help drive up Shape's revenue nearly 20% this year.

It's been a tumultuous year for Time Inc., where new CEO Rich Battista arrived in September, replacing Joe Ripp, who stepped down unexpectedly just a few months after a major reorg. But one very bright spot in the empire: Southern Living, which celebrated its 50th-anniversary year with its biggest-ever February issue. Under Editor-in-Chief Sid Evans, the monthly has been striking the right balance between the charm of its print product and the metabolism of the web -- particularly by investing in video (with 60 of its videos going viral on Facebook, with 1 million or more views). Under Publisher Ron King (who was promoted to a Time Inc. senior VP position in July, adding titles including InStyle and Essence to his purview), ad pages and revenue have grown 19% year-over-year. And the magazine opened its first branded gift shop in Myrtle Beach, S.C., with more to come in 2017.

Women's Health Editor-in-Chief Amy Keller Laird kicked off 2016 with a Dear John letter in the January issue, "breaking up" with the phrases "bikini body" and "drop two sizes," banning them forever from WH covers. (Amen!) The magazine has a playful edge, but it also tackles serious issues, as evidenced by the launch of its "#WhoNotWhat" campaign to end mental-health stigma. Under Senior VP-Publisher Laura Frerer-Schmidt, print revenue is up 8% and digital 17% year-over-year. And Macy's came on board to sponsor the magazine's annual Run 10 Feed 10 event ("Run a 10K and feed 10 hungry people in your hometown"), which has helped the Feed Foundation serve 5 million meals to the hungry over five years.