Auto Defections May Be the Least of Bill O'Reilly's Worries 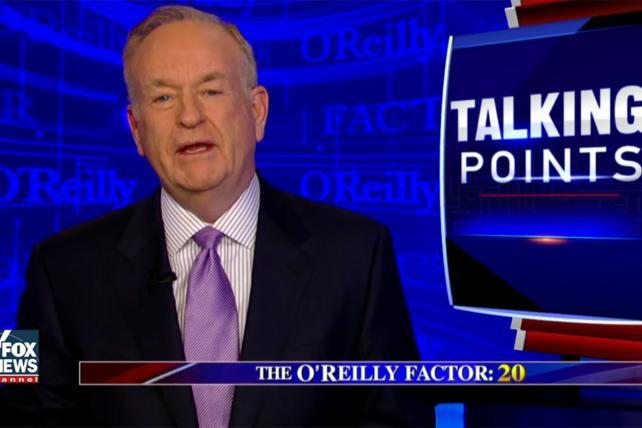 'The O'Reilly Factor' is feeling the heat.
Credit: Fox News

Five high-end automotive brands have begun backing out of their on-air buys in Fox News Channel's "The O'Reilly Factor," as Lexus, BMW and Mitsubishi on Tuesday joined Mercedes-Benz and Hyundai in putting some distance between themselves and the network's top draw. And while the Fox News ad sales team is now scrambling to stem the tide of any further defections, the loss of a few car sponsors may be the least of their worries.

While Mitsubishi and Mercedes over the last five quarters have been among the most visible sponsors of "The O'Reilly Factor," airing a combined 570 spots in the show at an estimated cost of $4.91 million, per iSpot.tv estimates, Hyundai and BMW aren't nearly as critical to the show's financial standing. Since the year began, Mitsubishi and Mercedes ads have run a total of 127 times in the 8 p.m. telecast, while Hyundai and BMW have combined for just six airings. (As it happens, that's exactly half the number of "O'Reilly" units that Pfizer bought in the same period to promote its Preparation H brand.)

As much as car dollars make up a significant portion of the overall "O'Reilly Factor" ad haul, the program is far more dependent upon direct-response marketers and pharmaceutical brands. According to iSpot data, the top "O'Reilly Factor" sponsor since Jan. 1, 2016, is Rosland Capital, a purveyor of silver and gold that regularly airs 60-second DR spots featuring the actor William Devane and a 1-800 number. The company, which in the last 15 months has invested some $5.89 million in 176 "O'Reilly" airings, was also a stalwart supporter of Glenn Beck's old 5 p.m. Fox News show, sticking with it while more than 300 advertisers took their business elsewhere.

Speaking of Glenn Beck, the advertiser revolt against his eponymous Fox News show began in July 2009, shortly after he characterized President Obama as a "racist" with a "deep-seated hatred for white people." It took nearly two years for the network to finally show Mr. Beck the door, at which point his advertiser base largely consisted of precious metals brokers like Rosland Capital.

Auto defections aside, if "The O'Reilly Factor" is to escape the fate of "Glenn Beck" before it, Fox News ad sales execs are going to have to placate sponsors like Jenny Craig. According to iSpot.tv, Jenny Craig has been the show's top advertiser since the year began, airing 100 spots at a cost of $2.61 million, and while it hasn't pulled out of its "O'Reilly" rotation, the weight-loss brand issued a statement in which it said it is "constantly evaluating" its media buys.

Among the 11 marketers that thus far have suspended their advertising in "The O'Reilly Factor" are Allstate, GlaxoSmithKline and the men's clothing brand Untuckit. The latter is the year's eighth-biggest "O'Reilly" backer, spending $1.03 million on 69 spots. Other top sponsors of the show include the Shriners Hospital for Children, Life Credit Company, Coventry Direct, the ASPCA, St. Jude's Children's Research Hospital and Aleve.

It's worth noting that none of the 11 advertisers that have backed away from their "O'Reilly Factor" buys have said that they would pull out of Fox News Channel altogether, and that Mercedes and Hyundai specifically noted that they'd be shifting their spots to other network properties. As is generally the case when a program that airs on a highly-rated network runs afoul of advertisers' expectations, the spots that were originally designed to run in the show under scrutiny are merely reallocated to other primetime, late-night and early fringe slots. For example, when brands like Schick, Taco Bell and L'Oréal bailed on MTV's racy "Skins" back in 2011, they didn't abandon the network altogether; in fact, at least one would rematerialize during "Skins" lead-in "Jersey Shore" -- itself no stranger to sponsor turmoil.

In the near term, Fox News can expect the fallout to pile up as the O'Reilly story continues to feed on itself. The sexual harassment allegations -- which he vehemently denies -- are disturbing, and they call into question parent company 21st Century Fox's assertion that it does not tolerate behavior that "disrespects women or contributes to an uncomfortable work environment." (That statement was made in the wake of Fox News' chairman and CEO Roger Ailes' July 2016 ouster.)

If there is no simple calculus through which to divine Mr. O'Reilly's long-term prospects, his tangible assets are hard to bet against. While MSNBC's Rachel Maddow has been putting up some gaudy numbers ever since the inauguration, "The O'Reilly Factor" remains the top-rated cable news program. It's also Fox News' biggest revenue driver, and its ad rates are concomitant with the post-election bump. According to Standard Media Index data, the average unit cost for a 30-second spot in "The O'Reilly Factor" in January and February was $15,038 a pop, up 41% compared with the year-ago rate and nearly $1,500 north of that fetched by its nearest competitor, "Hannity." By comparison, spots in CNN's "Anderson Cooper 360" and Ms. Maddow's MSNBC program cost about a third of what the O'Reilly show commands.

(If the going rate for 30 seconds of airtime in "The O'Reilly Factor" still seems like a bargain, the value of a unit is directly proportional to the show's audience composition. As the median age of "O'Reilly Factor" viewers is north of 73 years old, and the guaranteed news demo tops out at 54 years, the vast majority of the show's deliveries -- as much as 82% in the first quarter -- are chaff.)

However things shake out, Mr. O'Reilly thus far has not made mention of the controversy on his show. Monday's installment included the usual blend of direct-response, pharma and insurance ads, although three companies that have since indicated that they are leaving the show (Allstate, Untuckit and the GlaxoSmithKline brand Gold Bond) appeared in what was presumably their final "O'Reilly Factor" spots for the foreseeable future.

"We value our partners and are working with them to address their current concerns about the 'O'Reilly Factor.' At this time, the ad buys of those clients have been re-expressed into other [Fox News] programs," Paul Rittenberg, executive-VP for ad sales at Fox News, said in a statement.

The advertiser uproar comes as Mr. Rittenberg prepares to leave the company after putting in more than 20 years there. His last day is April 28. A successor has yet to be named.