A predisposition towards history is coded into my DNA. Even before I metamorphosed from carefree, flaxen-haired lad to gravity-bound couch enthusiast, I inherently understood that old, solemnly narrated war footage is awesome. "Victory at Sea," dogfighters fighting like dogs, hand-to-groin combat against unseen enemies -- even knowing the ultimate outcomes, the pairing of grainy images with dramatic orchestration continues to thrill.

So I'm always disappointed when I flip to A&E Television Networks' History Channel and happen upon well-lit, color footage that doesn't predate "Born in the U.S.A." At this point in its evolution, the network is as much about history as it is about oddball jobs. But while the gradual abandonment of its mission might send me scurrying towards Discovery's inferior Military Channel, it no longer feels like a betrayal.

That's because so many cable channels have long since abandoned their initial brand promise. The Weather Channel airs mainstream flicks like "Misery"; the MLB Network airs the Baltimore Orioles (they're a baseball team but only technically). Though many of these networks persist with their labored brand campaigns -- USA's "we're a bunch of wacky characters," TBS's "everything here is funny, even Frank Caliendo" -- I don't think viewers care one way or another. If a personality or program appeals to them, they'll find him/her/it.

'Top Shot'
Credit:
A&amp;E Television Networks
Thus I resolved to take a fresh look at The History Channel in that light. As an individual who sits in the bull's-eye of the network's demographic, I figured that it couldn't have blown me off in favor of connoisseurs of manufactured quirk less inclined to buy stuff stupidly and impulsively. Alas, if this week's slate of show and season debuts is any indication, they have.

The Larry Dobrow History Channel re-acquaintance campaign kicked off with "Top Shot," billed by the network as its "first-ever competition series." Forget that it more or less rips off the Military Channel's "Top Sniper" -- "Top Shot" labors under the impression that viewers will embrace a reality competition bereft of furniture-flinging conflict and Jacuzzis teeming with gonococcus.

In theory, any show which features loud guns and targets rigged with explosives that go kablammo! should be great fun. "Top Shot," however, takes the responsible route, tapping 16 expert marksmen to engage in chivalrous competition while wearing protective ear gear. That's a huge and deflating mistake. Three minutes in, I started hoping they'd ply the shooters with tequila; five minutes after that, I began praying for an appearance by Flavor Flav or Gary Busey. Instead, in a half-assed nod to the network's heritage, I was treated to a five-second infobite about how a particular rifle was used in Vietnam. See? History!

None of the candidates boast a secret felonious past, the show's single female participant has healthy self-esteem, and little trash is talked (unless you count a member of the red team cheekily referring to his opponents in blue as "Smurfs"). While I love the idea of a "nomination range" -- to choose a candidate for elimination, contestants blast away at his or her photo -- nothing else about "Top Shot" aims high or low enough to enthrall. 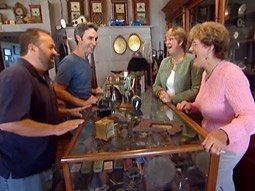 'American Pickers'
"American Pickers" similarly travels down the middle of the road -- often literally, as the show's pair of cheery junk merchants zip across the nation's highways in search of rusty tricycles. When they come upon a dirt-encrusted cache of crap, they attempt to negotiate a sale, explaining their thought process in asides to the camera. To kill time between segments, the show serves up two-sentence factoids about the mostly defunct brands that adorn the found items (again: history!).

Some of those items might be interesting, like a circa-1950 basket forged out of bottle tops, but most aren't. It doesn't help that the two hosts seem to be angling for a gig as paid endorsers, based on the way they inflict their charisma on viewers at every turn. They don't just say they'll do something; they say they're "on it like a duck on a junebug." Do ducks eat junebugs? Do they squat on them? Whatever. Let's confine the jokey banter and scripted ad libs to wacky morning radio zoos.

But it's not all bad. Given its premise -- a chronicle of the day-to-day workings of a family-operated Vegas pawn shop -- I expected a similar ain't-we-unique? vibe to waft off "Pawn Stars." Happily, its central personalities are blessed with some degree of self-awareness and intelligence; protagonist Rick knows everything about everything, and can convey his knowledge with enthusiasm and wit. 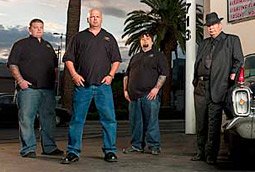 'Pawn Stars'
He, like his dad and son, are aware that they're characters in a cleaned-up setting pitched as "'Let's Make a Deal'-meets-'Sanford & Son,'" and they inhabit their roles with uncommonly good nature. They're also not above a killer marketing tie-in, like a 30-second promo for the upcoming "A-Team" flick in which the "Pawn Stars" slide into the roles, or at least the costumes, of Hannibal, Murdock, B.A. and Face.

Sure, the show glosses over the grimier aspects of the profession. It features no dirt or desperation, no tweakers frantically scratching their arms as they attempt to pawn stolen iPhones. And while its ten-second digressions into the origins of the pawn-worthy items might bore (once more, with feeling: History!), at least they don't feel superfluous within the show's pawn-shop setting. If there are a breezier, more effortlessly entertaining 22 minutes currently airing anywhere on TV, I'd love to see 'em.