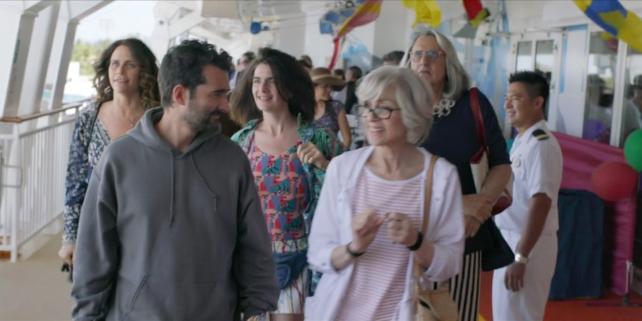 A scene from 'Transparent' on the Norwegian Jewel.
Credit: Amazon

Between a spate of highly publicized stomach bug outbreaks and even a few collisions, the last few years have not been kind to the cruising industry from a public relations perspective.

The last episode of the third season of the Emmy-winning Amazon series "Transparent," however, offered a different image of the industry. The episode, which went live Sept. 23, took place on the Norwegian Jewel Cruise Ship, a boat that was built in 2005 and refurbished in 2014.

"Transparent" follows a disfunctional California family that was thrown into disarray when the family patriarch (Jeffrey Tambor) comes out as transgender.

For those who haven't seen the episode, we won't spoil exactly what happened aboard the ship, but it provided pretty much a textbook case for why a consumer might be interested in buying a ticket on a cruise. The actors in the show are shown strolling around the ship, taking in the ocean views, the casino, a pool and the on-board performance space. Some of the shots, which were taken of actual cruise guests, looked almost straight out of a promotional video. The ship's branding -- Mr. Tambor's character was cautioned not to call it a "boat" -- is in clear view as the family gets ready to board.

Asked how the episode came to be, Norwegian Cruise Line CMO Meg Lee said the company was approached by a "Transparent" producer about shooting on the ship. An Amazon spokesman did not respond to questions about how the collaboration occured.

"Norwegian was pleased to be the location for the critically-acclaimed and groundbreaking series and, more importantly, for the family of characters to enjoy themselves and each other just as millions of other families do when they choose to sail with Norwegian Cruise Line, where guests have the freedom to vacation the way they choose," Ms. Lee said in a statement to Ad Age.

A spokeswoman for NCL declined to discuss whether it paid for its role on the episode. Some cruise guests signed waivers to appear as extras.

In addition to being shown in such a positive light, being associated with a progressive show such as "Transparent" might help both NCL and the industry at large counter stereotypes about cruise customers.

Despite the bad press, the number of global cruise passengers per year has still been ticking up. Some 24.2 million people are projected to go on a cruise this year, up from a projected 23.2 million in 2015 and about 22 million in 2014, according to numbers from industry group the Cruise Lines International Association.

"Cruising is a dynamic industry and offers a vacation for every travel style and every budget, as well as offering exciting backdrops for any kind of production," said CLIA SVP-strategic communications and marketing Lorri Christou in an emailed statement.