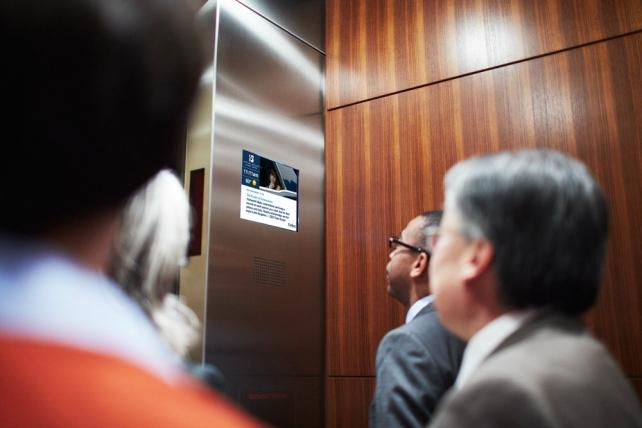 One company will soon own nearly all of the video screens you see every day in many office elevators and lobbies.

Captivate Network, which already owns the bulk of those business screens in elevators, is buying the company that owns most of the screens in lobbies, Office Media Network, operator of The Wall Street Journal Office Network, in a cash and stock deal, the companies said Tuesday. They declined to disclose terms of the deal.

The Wall Street Journal Office Network, the result of a licensing deal between Office Media Network and Journal parent Dow Jones, debuted in building lobbies in 2006 and expanded to elevators a year later. But it always trailed Captivate in terms of the number of people it could reach.

Buying the Wall Street Journal Office Network means the 17-year-old Captivate Network increases its screens to 12,000 from 10,000, according to the company. It is North America's largest in-office media network, reaching roughly 65 million adults each month, according to the company. A third company in the digital-placed based market, RMG Network, has screens inside Regus business centers.

"It bodes well not just for the future of Captivate but also for our entire industry," Mark Shapiro, Captivate's chairman of the board, said in a prepared statement.

Media buyers said the consolidation is a positive development for the out-of-home industry, particularly digital place-based media, the term used to describe video screens in offices, elevators, retail locations and taxis. Digital place-based media is a small but growing part of the media pie. Marketers are expected to spend just over $1 billion for ads on video screens in 2014, a 12.6% boost from the prior year, according to the MyersBizNet Media Business Report.

"This consolidation makes it easier to buy -- more seamless -- and expands the reach of a single network and gives us better access to inventory down the road," said David Krupp, CEO of the WPP agency Kinetic U.S., which focuses on out-of-home. "I don't know if there was ever a need for multiple vendors in this space," he added.

Both networks will continue to operate separately for about the next three or four months as they integrate technology, operations and staff. Roughly half of Office Media Network's 25 employees will move to Captivate, according to Captivate CEO Marc Kidd, with Office Media Network founder and CEO Jim Harris joining Captivate's advisory board. The remaining staff will be let go.