Conan's Ratings Are Down, but He's Huge Online

This week Turner Broadcasting will be out selling Conan O' Brien with a new pitch: Forget the TV ratings , look at his online popularity.

It's a natural angle, considering the intensifying scrutiny around the weakened TV ratings -and the "make-goods" that have come with them-for Mr. O' Brien's late-night "Conan" show on TBS. Whether advertisers will buy into it, considering the original pitch was that he was worth at least as much as his late-night counterparts on broadcast, remains to be seen. 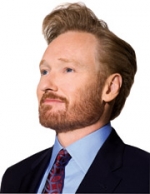 The strategy smacks of the one long employed by the CW. With his lanky frame and signature red hair, Conan O' Brien looks nothing like Blake Lively, the comely actress who plays buxom blonde socialite Serena van der Woodsen on CW's "Gossip Girl." And yet, Turner argues his show, like hers, skews toward younger audiences that don't necessarily make the boob-tube their first choice when it comes to sampling video entertainment.

Like "Vampire Diaries" and "Gossip Girl," two CW programs whose buzz outmatches their traditional TV viewership, "Conan" has a loyal following in the younger part of the audience advertisers covet, said Steve Koonin, president-Turner Entertainment Networks-people aged 18 to 34. That concentrated youth view is what makes the show compelling, no matter the overall ratings , he said. "We're never going to make 'Conan' into a big, broad multi-demographic hit, nor are we ever going to try," he said. "It's not why we wanted this guy, and, quite frankly, that 's not why he wanted us."

Turner has reason to focus attention on Mr. O' Brien's pull in other media. When "Conan" launched last November after NBC cut him loose and returned Jay Leno to its marquee late-night spot, it represented the latest front in the late-night wars-and an aggressive step for any cable network. Turner, which is sinking a reported $10 million-plus annually into a crowded field, moved boldly to claim what it thought was its due: higher-than-expected ad rates that it insisted should be on par with what marketers paid for NBC's "Tonight" and CBS's "Late Show." In its early outreach to ad buyers, Turner sought between $30,000 and $40,000 for a 30-second spot in "Conan"-Mr. Letterman's and Mr. Leno's programs typically secure between $30,000 and $45,000, according to ad buyers-and guaranteed that Mr. O' Brien's ratings among audiences aged 18 to 49 would match those of Mr. Letterman and run about 15% below those of Mr. Leno.

Yet after seeing mammoth initial ratings due to the NBC controversy, Mr. O' Brien's TV viewership has begun to settle. While his first show scored around 4.2 million viewers, nearly 3.3 million of which were between 18 and 49, according to Nielsen, his average since then has been about 1.06 million overall, with approximately 769,000 in the 18-49 category. The summer has proven more challenging. Mr. O' Brien's average 18-49 audience was surpassed in August overall by every rival except Chelsea Handler on NBC Universal's E!

To compensate, Turner has offered "Conan" advertisers make-goods, or additional advertising time, and has adjusted rates for the second year of Mr. O' Brien's show. "We all would like and anticipate our ratings to be higher, and we're working on this," said Linda Yaccarino, exec VP-chief operating officer, Turner Entertainment ad sales-marketing and acquisitions. "Stay tuned."

Meantime, she said, advertisers should be aware that Mr. O' Brien's show lures hard-to-reach young adults via online and social media, not only on TV. "TV is only a fraction of it," she said.

That argument is one likely to emerge from other media outlets, all of which are committing more resources to new distribution methods such as streaming video, downloadable clips and social-media postings. "Obviously, the bulk of our revenue comes from linear television, and DVR viewing is a significant number," said Jeff Ross, executive producer of "Conan." "Now, we would be dumb to ignore the digital side, which in the last year has grown for us significantly. We have a pretty large investment, and we have a lot of people working on it. We're just trying to do both at the same time."

Turner is making the case that Mr. O' Brien's combined online and TV audience reaches 20 million people between 18 and 49, and telling sponsors they recall ad messages a few percentage points better than is the norm for people who watch late-night talk shows. The average time spent viewing "Conan" content on his website, TeamCoco.com, has increased 30% since the show launched, and the average time spent per visitor on the site has increased 103%, according to Turner. On Facebook Mr. O' Brien has 1.7 million "friends," according to the network-more, as it turns out, than his average TV viewership in his first year on the air so far.

Turner's effort, said Ms. Yaccarino, comes after receiving a significant number of requests in advance of upfront negotiations for ad plans that involved both TV and digital advertising. Every sponsor that committed to "Conan" in the upfront purchased both TV and digital inventory, she said; TBS sold out all of the opportunities it scheduled for marketers to be placed into the "Conan" show itself. AT&T, General Motors' Chevrolet and Kia have returned for a "Conan" presence, while Dr Pepper, Ford, Lowe's and Wendy's have signed up for new berths.

AT&T likes "Conan" for the connection it brings to a young audience, said Mark Wright, VP-media services and sponsorships at AT&T. While declining to comment on the show's TV ratings , he suggested there was an allure to "the extensive and extremely loyal online fan base that is engaged in content across multiple mediums."

TBS is in the midst of rebuilding itself into a network aimed at younger comedy fans who already know the outlet as a place where they can watch "Family Guy" and other edgy fare, said Mr. Koonin. He believes the addition of "Big Bang Theory," a popular CBS sitcom, before "Conan" on the schedule could build a better lead in for the show. "We look at this as a long-term play."