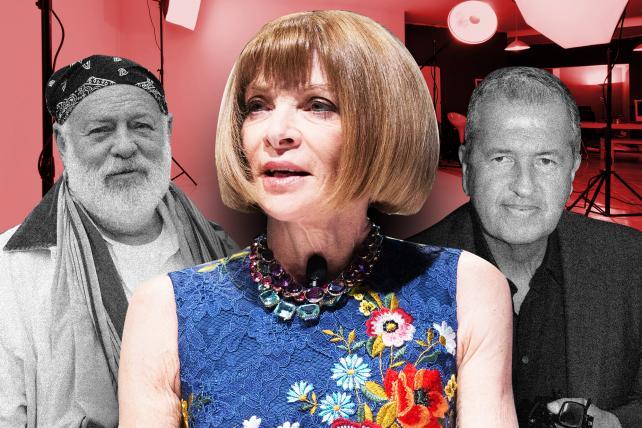 Condé Nast, the publisher of Vogue, GQ, Vanity Fair and other iconic glossies, has announced that it will stop working with A-list fashion photographers Bruce Weber and Mario Testino in the wake of a major investigation of sexual misconduct allegations published over the weekend by The New York Times. It's unclear how long the bans will last.

Weber previously made headlines on Dec. 1 (see "Fashion photographer accused of touching, forcefully kissing male model," per the New York Post) when news broke that model Jason Boyce had filed a lawsuit against him over alleged misconduct during a 2014 casting session. On Dec. 5, another model, Mark Ricketson, made similar allegations, joining Boyce at a press conference convened by Ricketson's attorney Lisa Bloom, who noted that her client's encounter was too old to sue over (see "Model says photographer Bruce Weber preyed on him during 2005 photo shoot," per the New York Daily News). On Jan. 3, Weber issued a statement on Instagram that read, in part, "I unequivocally deny these charges and will vigorously defend myself."

With the release of Sunday's print edition, the story was dramatically amplified. The Times devoted most of the top half of its front page to the report (headlined "'I Felt Helpless': Male Models Accuse Photographers of Sexual Exploitation" for print), bumping the news of the false "incoming ballistic missile" alert that rattled Hawaiians on Saturday to below the fold—and the Weber/Testino exposé jumped to fill nearly two full pages inside section A.

The Times story reads, in part,

Fifteen current and former male models who worked with Bruce Weber, whose racy advertisements for companies like Calvin Klein and Abercrombie & Fitch helped turn him into one of the foremost commercial and fine art photographers, have described to The New York Times a pattern of what they said was unnecessary nudity and coercive sexual behavior, often during photo shoots. ...

The Times notes that "Representatives for both photographers said they were dismayed and surprised by the allegations."

A journalistic investigation of Weber seemed inevitable after December's headlines. One story covering Weber and Testino was somewhat unexpected (fashion-world insiders knew the Times was talking to people who had worked with both men, with the publication of separate exposés presumed to be the likely outcome). Weber and Testino don't work together, but they're comparable in stature and both have been subjects of museum retrospectives (e.g., in 2012 I wrote about a major Boston Museum of Fine Arts exhibition of Testino's work, which i called "often sexually charged").

The Times reports that models "who said they were on the receiving end of unwanted attention felt the choice was clear: acquiesce and be rewarded with lucrative ad campaign work, or reject the approach and risk hobbling, or destroying, a career." The photographers' work was typically uncredited in their ad work (from the average consumer's view, though their respective signature styles became widely recognizable among fashionistas). But the magazines that could afford to assign to Weber and Testino often loudly trumpeted their contributions, sometimes with coverlines.

Visit any decent newsstand today and you'll find dozens of pages of photographs, across multiple U.S. and international magazines, by both men. But it's Condé Nast that's considered the leading benefactor of Weber and Testino, and thus Condé is the focus of particular scrutiny right now. (Full disclosure: Over the years I've written for various Condé Nast publications and was a longtime contributing editor at two Condé publications, Allure and the now-shuttered Details, that published work by both Weber and Testino.)

Accompanying the Weber/Testino exposé in print and online is a separate Times story headlined "Condé Nast Crafts Rules to Protect Models From Harassment." In it, Vanessa Friedman writes that "Condé Nast said it began working in late October on a code of conduct that will go into effect this month." She also reports on a statement that Condé supplied to the Times in response to its exposé:

In the statement, Anna Wintour, artistic director of Condé Nast and editor of Vogue, and Robert A. Sauerberg Jr., chief executive of Condé Nast, said: "We are deeply disturbed by these accusations and take this very seriously. In light of these allegations, we will not be commissioning any new work with Bruce Weber and Mario Testino for the foreseeable future."

On Saturday, Vogue also published a post on its website that it described as "a personal response" from Wintour titled "Anna Wintour Responds to Mario Testino and Bruce Weber Sexual Misconduct Allegations." It reads, in part, "Even as we stand with victims of abuse and misconduct, we must also hold a mirror up to ourselves—and ask if we are doing our utmost to protect those we work with so that unacceptable conduct never happens on our watch." Wintour quotes some of the particulars of the new Condé Nast Code of Conduct, as she calls it. They include:

* All models appearing in fashion shoots commissioned by Condé Nast must be 18 years of age or older. The only exceptions will be those appearing as themselves as part of a profile, news story, or similar content, and they will be required to have a chaperone on set at all times.

* Alcohol will no longer be allowed on Condé Nast sets. Recreational drugs are not permitted.

* Photographers will no longer be permitted to use a Condé Nast set for any work that is not commissioned or approved by the company.

* Any shoot involving nudity, sheer clothing, lingerie, swimwear, simulated drug or alcohol use, or sexually suggestive poses must be approved in advance by the subject.

Why did Condé Nast start working on its new Code of Conduct in "late October"?

For one thing, The New York Times essentially telegraphed its intention to investigate allegation of sexual misconduct in the fashion-media industry when on Oct. 27 it published a Style section article by Vanessa Friedman and Elizabeth Paton titled "'Terry Richardson Is Just the Tip of the Iceberg'" in the wake of the banishment of photographer Richardson by Condé Nast and others following allegations of sexual misconduct against him. (In early January, Richardson again made headlines; see "Fashion and Brand Photog Terry Richardson, Banned by Condé Nast, Now Under NYPD Scrutiny.")

Meanwhile, speculation raged during the men's shows in Milan over which other well-known photographers might be caught up in the scandal, with some stylists and fashion editors saying up to 10 more names could come out. Sexual exploitation and harassment has long been known to take place during fashion shoots for the last several decades, but both brands and magazine editors have generally turned a blind eye to it, observers said.

On his official Twitter account, Testino's two most recent tweets (as of this writing), from before the publication of the Times exposé, tout his editorial and brand work:

On his Instagram account on Sunday, Weber shared a photograph of his dog Dream (who starred in a 2014 campaign for Shinola's line of dog accessories):