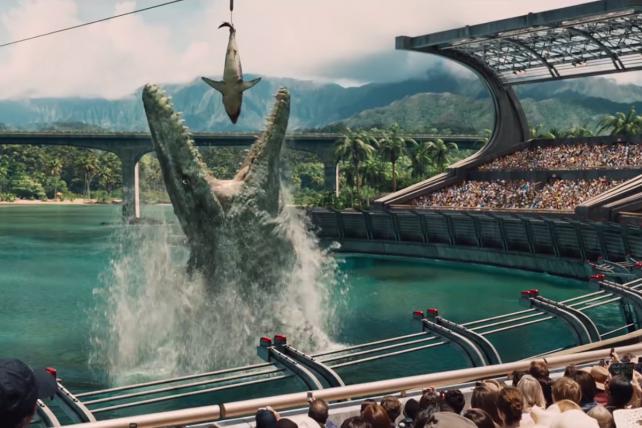 Television appears to have done a lot of the heavy lifting for the blockbuster opening weekend of Universal Pictures' "Jurassic World," as the studio thus far has invested a cool $30.7 million in national broadcast and cable inventory.

According to estimates by iSpot.tv, the National Basketball Association accounts for the highest "Jurassic" spending. Universal sank $3.2 million in spending in and around the league's regular-season games, playoffs and finals. The Cavs-Warriors series alone has attracted nearly $1 million in "Jurassic" dollars; through last night's broadcast, Universal has poured $934,855 into ABC's coverage of the 2015 NBA Finals.

Outside of pro hoops, TV's top-rated comedy has notched the most "Jurassic" business: Universal to date has spent $1.29 million for time in CBS's "The Big Bang Theory." NBC's summer competition series "American Ninja Warrior" also has been a key target for the studio.

Since Universal began rolling out teasers for its popcorn flick back in November, "Jurassic" spots have aired 5,304 times. Corporate sibling NBC has taken in some $2.85 million in dino dollars, followed by Fox ($2.77 million) and ABC ($2.42 million).

The bulk of the cable ads have run on NBCUniversal outlets. In the past month, "Jurassic" spots have aired 368 times on Syfy and another 313 times on USA Network.

The vast majority of the "Jurassic" spots have aired in the month leading up to the June 12 release date. Per iSpot.tv, Universal coughed up $28.1 million for TV time, or 92% of the film's current total spending.

Nearly half of the "Jurassic" TV spending was activated in the last two weeks, with Universal dishing out nearly $14 million since the month began. In the final week leading up to the film's June 12 release, the studio spent $7.01 million on TV time.

And it was money well spent. "Jurassic World" opened to a staggering $208.8 million in domestic box office receipts, eclipsing the record formerly held by "Marvel's The Avengers" ($207.4 million).

The "Jurassic World" spending data does not include co-branding opportunities developed with the likes of Lego and Dairy Queen. The DQ "Jurassic Smash" promo alone -- which thus far has aired 4,896 times on network and cable TV -- adds another $10.5 million to the overall spending. (Naturally, Universal shares the cost of such co-branded buys with its partner brands.)

Interestingly enough, Universal would seem to have gotten more bang for its promotional buck when its ad spending figures are compared with that of other recent releases. In the period spanning April 12 to June 16, Warner Bros. has shelled out $39.4 million in TV inventory in support of the Dwayne Johnson blockbuster "San Andreas." The disaster flick opened the weekend of May 29 to $54.6 million and has since generated $119.3 million in stateside box office.

Another big spender, Twentieth Century Fox, has laid down $31.4 million for TV time since April 18. The Melissa McCarthy comedy "Spy" has generated $56.9 million since it opened on June 5.