Emmys Drop as Niche Shows Win: Why Does Broadcast Carry This Ad for Cable and Streaming? | Ad Age
Skip to main content
Sign In Register

Emmys Drop as Niche Shows Win: Why Does Broadcast Carry This Ad for Cable and Streaming? 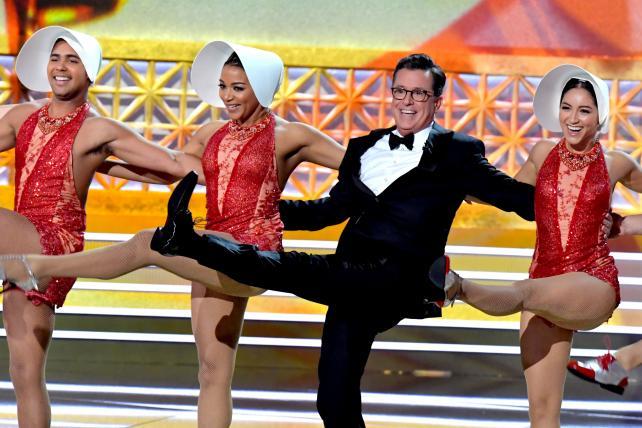 The Primetime Emmy Awards is suffering from the same malaise that for years has been plaguing its glitzier, more glamorous cousin, the Academy Awards, as its celebration of offbeat, less populist programming has come at the expense of the event's national TV ratings.

According to Nielsen time zone-adjusted data, CBS's broadcast of the 69th installment of TV's annual valentine to itself averaged 11.4 million viewers, and while that marked a very slight improvement compared to ABC's year-ago delivery (11.3 million), there was a decline in the number of viewers that advertisers want most. Whereas the 2016 broadcast drew a 2.8 rating, or approximately 3.59 million adults 18 to 49, this year's edition averaged a record low 2.5 in the demo. That translates to 3.22 million adults 18 to 49, a drop of 10 percent.

The demo delivery for last year's Emmys marked a 22 percent drop compared to the 2015 show on Fox.

It is possible that the final live-plus-same-day numbers, which will be available Tuesday morning, will reflect an upward adjustment in the demo turnout. The Nielsen data also does not include viewers who streamed the Emmys via the CBS All Access service.

While broadcast ratings are influenced by a seemingly unending string of variables -- competition, lead-ins, weather, the political environment, streaming, cord-cutting and scheduling are just a few factors that immediately spring to mind -- the Emmys' slide coincides with the near-erasure of big-reach broadcast TV shows from the winner's circle. For example, Sunday's ceremony saw Hulu's "The Handmaid's Tale" earn bragging rights as the first streaming series to win the top award for a drama; in so doing, the dystopian fable beat out a field that included three Netflix series, an HBO drama and AMC's "Better Call Saul."

Also up for Outstanding Drama Series was NBC's breakout 2016 hit, "This Is Us." The last time a network show won the hardware for best drama was in 2006, when Fox's "24" beat three broadcast series and HBO's "The Sopranos." (That year's Emmy broadcast also featured an overalls-clad President Donald Trump warbling the theme to "Green Acres" with actress Megan Mullally. So that happened.)

That streaming and cable once again dominated the Emmys wasn't particularly surprising, given how well represented the non-broadcast shows were when the nominations were first handed down in July. Of the 40 nominees in the six major categories, only nine, or 23%, had roots in old-school network TV; in addition to the aforementioned "This Is Us"; the outliers included ABC's "Black-ish" and "Modern Family." (HBO's "Veep" ran off with its third consecutive win for Outstanding Comedy on Sunday.)

Thanks to NBC, broadcast wasn't shut out altogether last night, as Sterling K. Brown brought home one of the pointy-winged statues for his role on "This Is Us," the red-hot "Saturday Night Live" hauled in four trophies and "The Voice" was voted Outstanding Reality-Competition Series. But network TV's relative paucity of victories (HBO topped all comers with 10 wins, while streamers Hulu and Netflix combined for nine) makes the Emmys' ongoing status as a broadcast TV entity a bit of a head-scratcher.

But for a few sports-related contractual obligations (the patchwork "Thursday Night Football" package often has CBS promoting NBC and vice versa), broadcasters generally don't accept promotional spots from their rivals. In other words, ABC can't buy 30 seconds of airtime to promote "Grey's Anatomy" in NBC's "Chicago Med." (Cable does not share this particular compunction; FX is free to buy time in programming on TNT, AMC, ESPN and pretty much every other combination of non-broadcaster letters you can think of.)

Given how the networks generally don't like to acknowledge that their traditional competition exists, it's perhaps a little odd that the Big Four continue to trade off the rights to air what has become a three-hour infomercial for streaming services and cable networks. In terms of both critical acclaim and share-of-attention, why promote the outlets that are hungrily gnawing away at your lunch? (CBS is the only member of the Big Four that doesn't own a stake in Hulu, so the three "Handmaid's Tale" wins were even more of a slap in the face to the legacy broadcast model.)

Of course, CBS and each successive network that hosts the Emmys enjoys the luxury of placing its talent in the spotlight, and while an awful lot of Americans probably didn't enjoy Stephen Colbert's constant barrage of anti-Trump barbs, his performance as emcee all but guaranteed the "Late Show" host an extended stay in the news cycle. (Booking Hillary Clinton for Tuesday night's show probably won't hurt his ratings, either.) And naturally, there's the inflated ad sales revenue that comes with any live event; our back-of-the-envelope math puts CBS's overall take for Sunday's broadcast in the neighborhood of $35 million, give or take.

Speaking of the ads, CBS last night accepted a fair amount of promotional spots from its streaming rivals, with ads for Netflix, Amazon Prime and Hulu appearing throughout the broadcast. If the Emmys are increasingly becoming a celebration of over-the-top services, at least CBS was in a position to maken them pay for the privilege of sucking the air out of the room.

CBS aired multiple teasers for its own shows, including the upcoming freshman efforts "Young Sheldon," "Wisdom of the Crowd," "Me, Myself & I," "S.W.A.T." and "SEAL Team." The network also aired two spots in support of "Star Trek: Discovery," which bows Sunday, Sept. 24, on the linear channel before moving to CBS All Access.

The current eight-year revolving deal with the Television Academy expires after NBC airs the 2018 edition of the Emmys.