Disney to Kick Off an ESPN Streaming Service in 2018

The Walt Disney Co. on Tuesday announced it has accelerated its investment in BAMTech, the live-streaming company spun off by Major League Baseball Advanced Media, setting the stage for the Mouse House to jumpstart the launch of ESPN's long-awaited direct-to-consumer service.

Speaking to investors during Disney's third quarter earnings call, chairman and CEO Bob Iger said the $1.6 billion acquisition of a majority stake in BAMTech will give the media giant stewardship over the "most robust live-streaming platform out there," which in turn paves the way for the rollout of ESPN's upcoming over-the-top service and a second Disney-branded movie-and-TV service.

The ESPN OTT offering will roll out in early 2018, and in its first year of operation will provide subscribers with some 10,000 live sporting events that would not otherwise be available via ESPN's traditional TV networks. In the early going, the multi-sport OTT package will include live games from three major league sports leagues (MLB, NHL, Major League Soccer), as well as various college sports and Grand Slam tennis action.

It is perhaps worth noting that ESPN will not be streaming live NFL or NBA games via the new OTT service, or at least not in the early going. The ESPN announcement arrives just a day after CBS made hay about the impending launch of a streaming-sports service of its own.

While the new service is designed to reclaim many of the cord-cutters who have parted ways with ESPN and the rest of the basic-cable channel lineup, the exclusive live content could also prove to be a means to relieve upscale sports fanatics of a few extra bucks every month.

Pricing for the OTT packages has not been set. 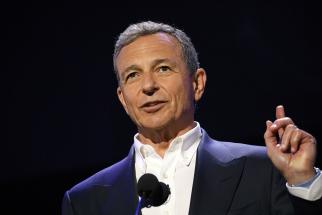 Bob Iger, CEO of The Walt Disney Co., speaks during the Disney Legends Awards at the D23 Expo in July 2017.

Iger said Disney has not spoken to ESPN's cable, satellite and telco-TV partners about the upcoming digital offering, which will be accessible via ESPN's existing app. "We've not had conversations with our distributors," Iger said, before adding that Disney has "all the confidence in the world in our ability to strike deals favorable to the company, given the strength of the product we offer."

Among the Disney affiliate deals that are set to expire in the near term are its current pacts with Altice (formerly Cablevision), Verizon's Fios TV and the Time Warner Cable subs now clustered under the new Charter Spectrum brand. Big fish like Comcast and Dish Network are locked in until the early part of the next decade.

ESPN fetches the industry's most vertiginously steep carriage fee, with operators paying on the order of $7.86 per subscription per month. With an estimated reach of 87.2 million households, the ESPN flagship alone this year is on pace to rake in some $8.2 billion before a single penny in advertising revenue is factored into the mix. Meanwhile, the sports giant's rights fees add up to around $5.2 billion per year, minus production expenses, thanks to big-ticket contracts with the likes of the NFL ($1.8 billion), NBA ($1.2 billion) and MLB ($680 million).

Speaking on CNBC's "Closing Bell" shortly before the earnings call, Iger told correspondent Julia Boorstin that the pivot toward a less bundle-dependent model needn't suggest that Disney is throwing in the towel on traditional TV. "Well, for now the multichannel ecosystem is still very robust in terms of its profitability to the company and to ESPN," Iger said. "So right now we don't have a need to necessarily break out from that, but this certainly gives us the optionality if we get to a point where the business model is no longer serving the needs of interests of the company or the shareholders."

As one might well expect, the ESPN OTT service will be ad-supported. Such will not be the case, however, for the new Disney-branded product, which will include original TV series and films expressly developed for it. As Iger's team begins gearing up for this second OTT launch, Disney will begin pulling its new Walt Disney Pictures and Pixar releases from Netflix beginning in 2019.

Iger said the Disney OTT service would roll out "as a global product … in multiple markets outside the United States."

Iger said the new digital offerings will mark a "major strategic shift in the way we distribute our content," before adding that the "future of this industry will be forged by direct relationships between content-makers and consumers." He went on to clarify that the "disposition of the Marvel and Star Wars films has not been determined," so there's no way of telling if the upcoming "Star Wars: Episode IX," which will conclude the latest Lucasfilm trilogy, or the rumored Boba Fett movie will make it to Disney's new Netflix-esque service.

The launch of the new Disney product will be timed to coincide with the pay TV window for the company's 2019 theatrical slate, which includes the sequel to "Frozen" and "Toy Story 4."

For the April 1-June 30 quarter, Disney's cable networks group saw overall revenue slip 3% to $4.1 billion, largely because of step-ups related to its NBA rights deal, lower ad revenue and severance and contract termination costs at ESPN. Revenue at the ABC broadcast unit was up 4% to $1.8 billion, while operating income fell 22% to $253 million. That decline was due in part to lower ratings for ABC primetime programming, which in turn led to a drop in ad sales revenue.

All told, the broadcast and cable nets raked in some $5.9 billion in Q3 revenue, down 1% from the year-ago tally.