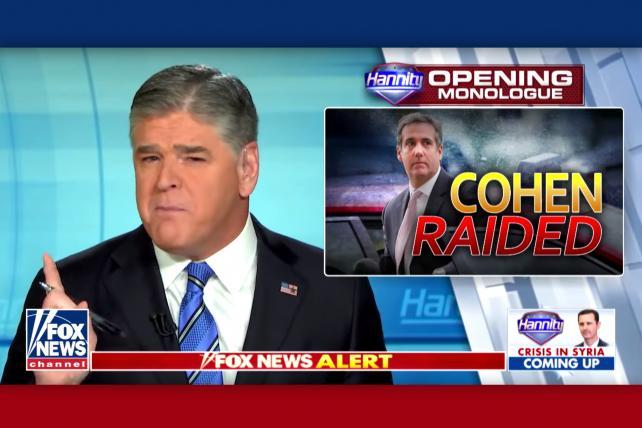 Sean Hannity, Fox News' biggest star, has long been one of President Donald Trump's staunchest defenders on cable TV, and now it turns out that they also share a lawyer.

Lawyers for Michael Cohen revealed the association with Hannity in a New York City courtroom Monday, saying the host is one of Cohen's three recent clients.

Cohen, who is under criminal investigation by U.S. prosecutors for possible bank and wire fraud, is Trump's longtime lawyer. Cohen said he paid $130,000 to adult-film star Stephanie Clifford, known as Stormy Daniels, for her silence on an alleged affair with Trump. Cohen's other client is Elliott Broidy, a fundraiser who resigned from the Republican National Committee after it was disclosed that he and Cohen paid $1.6 million to a Playboy Playmate with whom he had an extramarital affair.

The Hannity revelation illustrates how close the ties are between the White House and Fox News. Former star anchor Bill O'Reilly, for example, also shared a lawyer with Trump, Marc E. Kasowitz. The president is also an avid viewer of Fox News and his tweets often appear to be prompted in part by segments on shows like "Fox and Friends."

Hannity, who started broadcasting his radio show just after the news broke, said he had known Cohen for a long time. He said they had brief discussions about legal questions, that he never paid legal fees and that his work with Cohen never involved a third party. The host, who added that he may have paid Cohen $10, didn't disclose what matters were discussed.

"I have occasionally had brief discussions with him about legal questions about which I wanted his input and perspective," Hannity said in a statement sent by Fox News. "I assumed those conversations were confidential, but to be absolutely clear, they never involved any matter between me and a third party."

Hannity later wrote on Twitter that his discussions with Cohen "dealt almost exclusively about real estate."

He strongly criticized the FBI raid on Cohen's office and home last week, but never disclosed his relationship with Cohen.

"What people are not understanding here is when the special counsel raids the office of the president's private attorney, Mueller has now basically back-doored his way into basically every single Trump business deal, at least since when Michael Cohen has worked with Donald Trump," he said during one broadcast last week.

The lack of any disclosure of Hannity's connection with Cohen raises ethical questions for Fox News.

Even so, unless more damaging information emerges, the news could translate to "wonderful ratings tonight" for the anchor, says Brian Wieser, senior research analyst at Pivotal Research Group, who added that Hannity "could play victim" of government overreach.