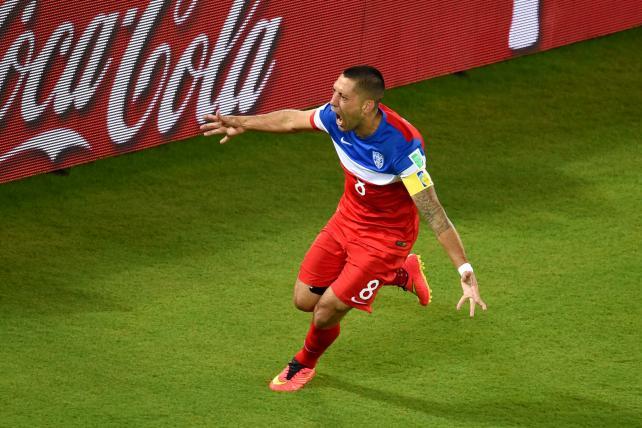 US forward Clint Dempsey celebrates after scoring during a Group G football match between Ghana and US at the Dunas Arena in Natal during the 2014 FIFA World Cup on June 16, 2014.
Credit: Photograph by JAVIER SORIANO/AFP/Getty Images

With about eight and a half months to go before the first ball finds the back of the net in Moscow's Luzhniki Stadium in the 2018 FIFA World Cup, Fox Networks Group has locked in the halftime and postgame sponsors for its coverage.

Fox has finalized comprehensive sponsorship agreements with Verizon and Volkswagen, Fox Networks Group Executive VP of Advertising Sales Bruce Lefkowitz says. Verizon will serve as the official halftime sponsor of each of Fox Sports's 64 World Cup matches, while Volkswagen will handle the postgame duties throughout the tournament.

About three-quarters of Fox's marquee World Cup sponsorship deals have been secured, Lefkowitz says, while more than a dozen advertisers have suited up for commercial inventory around the matches and at the half. Fox is in advanced discussions with FIFA partners Adidas and Coca-Cola, the latter of which is also an official sponsor of U.S. Soccer.

It's rather early for Fox to have landed most of its high-end sponsor deals, especially when the fate of the United States team remains uncertain.

In the coming weeks, look for Fox to announce a global advertiser that will use the 2018 World Cup as its entrée into the U.S. media market.

In keeping with Fox's embrace of the six-second commercial format -- introduced to TV in August during the Teen Choice Awards on Fox's broadcast network and subsequently seen popping up in the network's NFL and Major League Baseball coverage -- Lefkowitz said his team is investigating how to integrate the ultra-concentrated ads within its live World Cup coverage. Because there are no traditional commercial breaks in soccer (an aberration that for years made American broadcasters all but allergic to the sport) the introduction of in-game spots, no matter how brief, would be a radical departure from precedent.

But international soccer's governing body must give its approval before Fox storms the pitch. "We're always looking at how we can improve the environment for our advertisers, but [the six-second-ad proposal] has not been approved by FIFA yet," Lefkowitz said. Presumably, any such initiative would leverage the sort of split-screen composition that allows for the simultaneous delivery of live on-screen action and ad content. (Fox has experimented with split-screen ads in its Nascar broadcasts, and the NFL is said to be kicking the tires on the format as a means to eliminate downtime.)

In another first, Fox's World Cup ratings guarantees now include out-of-home deliveries in bars, restaurants, gyms and other public venues. A uniquely communal viewing experience, traditional home-bound ratings for World Cup broadcasts have never quite reflected the actual reach of the tournament.

While the opportunities afforded Fox by its World Cup stewardship are legion -- its coverage of the 2015 FIFA Women's World Cup culminated in a USA-Japan final that drew 22.3 million viewers and a 11.4 household rating -- the time difference between Russia and the U.S. is not inconsiderable. Moscow is eight hours ahead of New York and nearly a half-day ahead of Los Angeles, so a match that kicks off at, say, 4 p.m. local time would begin at 8 a.m. in Gotham and 5 a.m. in L.A. And unlike the Olympics, the World Cup doesn't cotton to tape delays.

Soccer fanatics will adjust, naturally, and if the U.S. team manages to make it into the knockout stage, even more casual fans will start setting their alarm clocks. But as the name of the tourney connotes, the appeal of the World Cup transcends national borders.

"The U.S. team's performance is the icing on the cake, and obviously a trip to the Final would be nirvana for us," Lefkowitz said. "But every four years the World Cup has grown bigger than the previous World Cup, and that coincides with soccer's ascension to the status of a top-tier sport."

With two qualifiers left on the schedule, the U.S. team finds itself in fourth place in the CONCACAF bracket, which means it may have to win a playoff match in order to advance to the big show. Earlier this year, during the Fox Sports upfront tour, President, Chief Operating Officer and Executive Producer Eric Shanks joked that if the U.S. squad unexpectedly couldn't find a way to book its ticket to Moscow, "that would [be] like, $200 million flushed down the toilet."

But given the demand for World Cup inventory, it would appear that advertisers aren't counting out coach Bruce Arena's charges. The penultimate qualifier is scheduled for Oct. 6, when the U.S. side clashes with Panama, which currently holds a one-point advantage over the Americans. The final qualifier, on Oct. 10, pits the U.S. against last-place Trinidad and Tobago.

Fox Sports's presentation of the World Cup kicks off in the Russian capital on June 14, 2018. While the company hasn't disclosed its revenue targets, the tally to beat is the record $529 million that ESPN pocketed in ad sales with its coverage of the 2014 event in Brazil.