'Hairspray Live!' Not as Sticky as Previous NBC Musicals 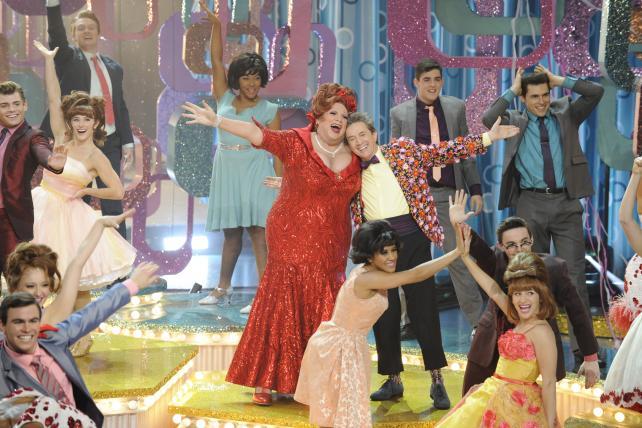 After launching to rave reviews and alpine-high ratings three years ago with its made-for-TV production of "The Sound of Music," results for NBC's annual live musical series have begun to approximate a sine wave -- up one year, down the next. And if the early ratings are any indication, the network's latest foray into song and dance, an adaptation of the 2002 Broadway show "Hairspray," appears to be on the downward slope.

According to preliminary Nielsen data, NBC's three-hour presentation of "Hairspray Live!" averaged 8.92 million viewers and a 2.3 rating in the network's target demo, which works out to 2.95 million adults 18-49. If those numbers aren't adjusted upward in the final live-plus-same-day tally, "Hairspray Live!" will stand as the least-watched, lowest-rated of NBC's four produced musicals.

Compared to the year-ago "The Wiz Live!," which averaged 11.5 million live-same-day viewers and a 3.4 in the demo, the "Hairspray" production was down 22% in overall deliveries and off nearly one-third (32%) among the 18-to-49 set. "The Wiz" marked a tidy rebound from the previous lows set by the December 2014 broadcast of "Peter Pan Live!," which averaged 9.21 million viewers and a 2.4 in the demo.

NBC launched the series to great fanfare on Dec. 5, 2013, as Carrie Underwood and her "The Sound of Music Live!" cast mates helped scare up a mammoth 18.6 million viewers and a 4.6 in the demo. The show delivered NBC's biggest non-sports programming night since the 2007 Golden Globes.

While critics were taken with "Hairspray's" kicky exuberance, the ratings appear to have fallen well shy of media buyers' expectations. One agency said it had anticipated at least a 3.2 rating in the C3 currency, the metric that includes commercial deliveries in the live broadcast and three subsequent days of playback. And while the DVR may prove to be a boon for the likes of Oreo, Toyota and Reddi-Wip, all of which were featured in live ads that were integrated within the show itself, time-shifting won't do much to add impressions for marketers that bought inventory during the standard commercial breaks.

It's worth noting that the lift from fast nationals to live-same-day for "Hairspray" may be greater than usual, as the show ended at 10:54 p.m. EST. Once Nielsen adjusts for those six minutes of airtime, "Hairspray" ultimately may edge "Peter Pan Live!"

This year marked the first time NBC elected to air its musical event outside of Thursday prime, where it bumped up against the CBS/NFL Network "Thursday Night Football" package. While the Venn diagram of NFL fanatics and diehards who know all the words to "You Can't Stop the Beat" probably looks like a deconstructed Oreo cookie, NBC had little choice but to shift "Hairspray" to its midweek slot, as tonight marks its own third-ever "Thursday Night Football" broadcast. (With a home-field playoff berth on the line, that matchup between the 10-2 Raiders and 9-3 chiefs could very well double the "Hairspray" ratings.)

The greatest threat "Hairspray" faced was from Fox's decelerating "Empire," which is on pace to notch yet another series low with a preliminary 2.5 rating in the 18-49 demo -- luckily for Cookie and Co., the show wins back an unusually high number of impressions in C3/C7 -- and the penultimate episode of cycle 33 of CBS's venerable "Survivor." Per Nielsen, Wednesday night's installment of "Survivor" averaged a 2.5 in CBS's target demo (adults 25-54), which was down a few tenths from the 2.9 NBC drew in its first hour of the "Hairspray" production.

NBC aired in-house promos for its hit freshman drama "This Is Us," which returns from its holiday hiatus on Tuesday, Jan. 10, as well as the upcoming fantasy-adventure strip "Emerald City" (Jan. 6), the competition series "The Wall" (Jan. 3) and the new-look "Celebrity Apprentice," featuring Arnold Schwarzenegger (Jan. 2) in the chair vacated by President-elect Donald Trump.

Looking ahead to its next big song-and-dance routine, NBC aired a 15-second teaser for a live production of "Bye Bye Birdie," which is set to star Jennifer Lopez. Last produced in 2009 for a limited six-month revival, "Bye Bye Birdie" was inspired by Elvis Presley's conscription into the U.S. Army in 1958.