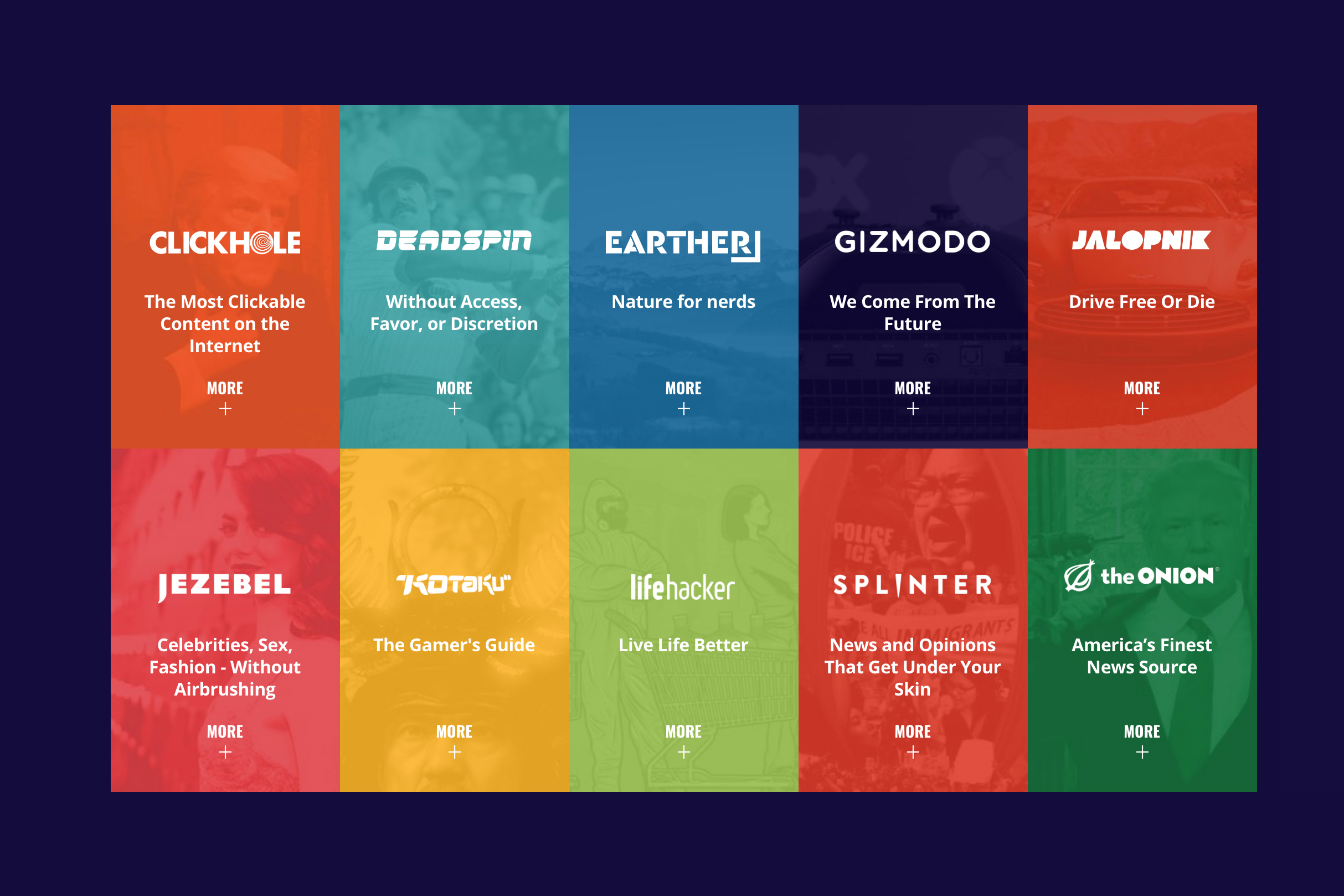 Brands that are part of Univision's Fusion Media Group division (for now).

A few comments about comments: In a letter sent out to Wall Street Journal subscribers last night, Editor-in-Chief Matt Murray writes, “This week, we are introducing initial steps that will pave the way for audience conversations that more of you may be interested in reading and perhaps in contributing to.” Translation: Comments sections suck, but maybe you, dear reader, can help improve ours? Pretty please?

Murray continues on, outlining the “Five Most Significant Changes”: “Only WSJ members can participate,” “Audience conversations will only be available on certain articles and for a set amount of time,” “We’ve strengthened our moderation and will highlight exemplary responses,” “All open articles will include a question” and “We've set up an email alert system” (“to immediately notify members when comments are approved or rejected”).

Buyer beware: The Gizmodo Media Group, which includes flagship Gizmodo and sibling sites including Deadspin, Jezebel and Jalopnik (all parts of the old Gawker Media mini-conglomerate), plus The Onion and its siblings Clickhole, The A.V. Club and The Takeout, are being acquired from Univision's Fusion Media Group by Boston-based private equity firm Great Hill Partners. In a New York Magazine Intelligencer post titled “Gizmodo Media Group’s New Private-Equity Boss Has Some Thoughts About the Company’s Values,” Madison Malone Kircher writes that media veteran Jim Spanfeller, who will head the properties under the new ownership, sent a memo to “his notoriously independent new staff” containing lines such as “While editorial independence is critically important, there needs to be a healthy and productive partnership with the business side for the company to be truly successful” and “We want our work environment to be one where people can BE PASSIONATE AND HAVE FUN.”

It’s hard not to imagine Team Gizmodo feeling, you know, triggered... and already bristling at the thought of the Spanfeller Administration. As for Great Hill Partners—which says “it is our mission to be the most trusted private equity partner by embodying our core values of integrity, teamwork, accountability, attitude, meritocracy, and a desire to win”—well, you have to wonder if they really know what they’re getting into. The company counts PuppySpot and YogaWorks among its active investments, but nothing quite like what's it's buying.

So let’s start the countdown clock now to track just how long it takes for Great Hill to get savaged by Team Gizmodo along the lines of “Univision Is A Fucking Mess,” a 7,500-word post published by the Gizmodo Media Group’s so-called Special Projects Desk last May. In it, Kate Conger, David Uberti and Laura Wagner write,

This company is Univision, which until recently obligingly filled the role of absentee stepfather to Gizmodo Media Group, our employer. Now, Univision’s business is struggling, and GMG has suddenly found itself under a very watchful eye.

Meanwhile, elsewhere in the portfolio of media brands Great Hill is buying, The Onion is out today with a darkly satirical post that might raise a few eyebrows (even by Onion standards): “Netanyahu Vows To Clog The Rivers With Skulls Of His Enemies In Last-Minute Push To Win Over Undecided Voters.”

Adjusting course: Hearst is shaking up its Hearst Autos group. Sharon Silke Carty has been named editor-in-chief of Car and Driver, after getting poached from Automotive News (an Ad Age sibling), where she was a senior editor. She’s taking over from Eddie Alterman, who was recently named chief brand officer for Hearst Autos.

Meanwhile, Michelle Panzer, the senior VP of strategic marketing and head of digital publishing for Say Media, is joining Hearst Autos as chief marketing officer. And Chris Lambiase, the CMO for Hagerty, the insurance company focused on the classic-car market, is taking a new role as senior VP of enthusiast partnerships for Hearst Autos.

Few people have been through more wild ups and downs in life than David Crosby. The legendary Byrds/CSNY singer/songwriter has survived five months in a Texas prison, drug and alcohol addiction, the sudden death of his girlfriend, a liver transplant, bitter breakups of his iconic bands, severe financial hardship and medical ailments like diabetes and hepatitis C. Somehow or another, at age 77, he’s not only lived to tell these tales, but he’s writing some of the best music of his career. In the past five years he’s released four solo album that rank up there with his best works of the Sixties and Seventies. You can see him on tour later this year with his Sky Trails band, including a return visit to Woodstock 50 years after he played the original.

Greene also notes that Crosby has, since 2011, been a seriously prolific social media user, having “tweeted over 49,000 times, offering his thoughts on everything from the 2020 election to how to quit drinking to Kanye West”—and that his “mix of life experience, hard knocks and brutal honesty makes him the perfect choice for his newest gig: Rolling Stone’s advice columnist.”

The column is going to be Ask Croz, and it’ll debut in the June issue of the magazine. Meanwhile, you’re invited to pelt Crosby with questions by emailing him at [email protected] or by simply tweeting your query with the hashtag #AskCroz.