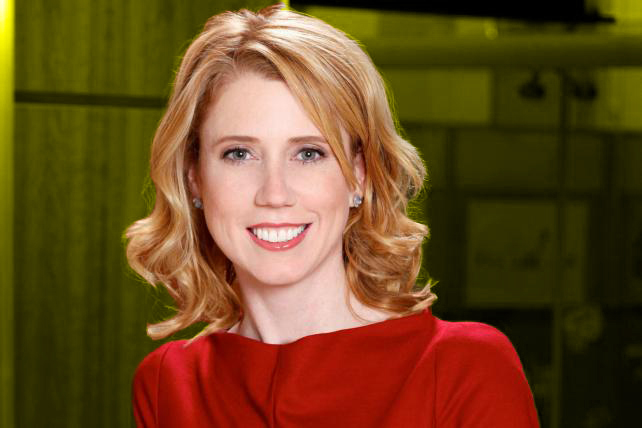 That the people who are going to bury us all don’t particularly care for our favorite sneakers or have any idea who wrote “Smells Like Teen Spirit” is a bit much to absorb on a dreary April day in Greenwich Village, but Jonathan Vu is letting us have it with—pardon the expression—both barrels.

Vu, who reps Converse as global managing partner at IPG’s Initiative, isn’t letting his audience down easy. Speaking to some 500 TV and digital ad sales execs from the stage of the NYU Skirball Center, the agency strategist is here at Initiative’s third-annual “reverse upfront” to illustrate some of the challenges facing the iconic sneaker brand. If part of his message will foster more than a little existential angst in the mostly Gen X crowd, so be it.

“The reality is that most Gen Z kids have never owned a pair of One Stars,” Vu exclaims, in a nod to the low-top Converse shoes favored by aging skaters, surfers and punks. Then he drops the hammer. “They don’t even know who Kurt Cobain is!”

As it happens, this is the 25th anniversary of the Nirvana frontman’s death, and for a moment you can almost hear the forty- and fifty-somethings wince at the reminder of their own impermanence. Not helping matters is the fact that as a demographical outlier, Vu very well may have been wearing footie pajamas in April of 1994.

As much a part of the fabric of the American experience as are apple pie and mobility scooters, Converse’s Chuck Taylor All-Stars have been all but immune to the faddism that has relegated so many other lifestyle brands to the dustbin of history. (If nothing else, All-Stars serve as the only bit that overlaps in the Venn diagram of Rocky Balboa and Joey Ramone.) But the sort of multi-generational cachet enjoyed by Chucks is hardly the norm, and it’s the far younger brand—the first One Stars rolled out in 1974, a good 50 years after Chucks showed up on the scene—that needs to find an in with a segment of the population that isn’t big on knee-jerk reverence.

“The challenge is to break through to a generation that is unaware of your brand and incredibly fickle,” Vu says, before providing a rundown of some of the more immersive executions his team cooked up with Converse. One particularly compelling activation saw Converse and the youth-culture outlet Complex team up for a night of Trap Karaoke in Los Angeles. There’s a lot to unpack in Vu’s 60-second clip, but he characterizes the user-generated concert series thusly: “It’s like going to church, except instead of ‘Amazing Grace,’ you’re singing ‘Back That Azz Up.’”

Further burnishing Converse’s street cred is a collaboration with Tyler, the Creator, who designed a limited-edition line of One Stars dubbed GOLF le FLEUR. The new “Faux Skin” collection just dropped this month. Short of an endorsement by the spooky teen artiste de jour Billie Eilish, it’s hard to imagine a more apt brand ambassador for One Stars than the hyperactive, multi-hyphenate ringleader of Odd Future.

Additional client showcases from Lego, Amazon Prime Video and Keurig Dr Pepper provide the sales execs on hand with what Initiative hopes is a deeper dive into each brand’s efforts at achieving a higher plane of cultural relevance.

If the universally recognized Lego would seem to be impervious to the tyranny of trends, Kat So, managing director, IPG Partners and Isabel Graham, marketing director, Lego Americas Group, aptly illustrate how even the most ubiquitous brands have to hustle to remain relevant in a world that often seems immune to the analog. When Graham asks how many people played with Lego when they were kids, roughly 90 percent of the attendees throw a hand skyward. When she follows up with a question about whether anyone has made a recent purchase of Lego, far fewer hands go up.

“So that’s a very big problem,” Graham says, before launching into a play-by-play of how Initiative worked with Lego to reignite the spark of creativity in kids everywhere. She adds that the gender assumptions that have long hampered the product’s adoption by girls were in need of revision as well.

In an inspired attempt to strip Lego’s cultural edifice down to the cornerstone, Graham zeroes in on an individual white piece that represents the brand’s most elemental building block. “We took it back to the power of the brick,” Graham says, as a magnified photo of a single-stud unit looms on the screen behind her. “To a child, this can be anything from a dinosaur tooth to a power cell on the back of a Stormtrooper’s uniform,” she says.

After Graham speaks about some of the upcoming product launches Lego has in store—a kit to commemorate the 50th anniversary of the Apollo 11 mission will be go on sale this summer—So wraps the presentation with a call to leave the hidebound spots-and-dots media plan in the moon dust. “Traditional tactics of high reach and frequency are not going to cut it anymore,” So says. “We can’t just get into kids’ and parents’ faces—we need to get inside their heads.”

(A few days later, one sales exec who was on hand for the Initiative pitch said she’d love to see a Lego campaign that capitalized on one of the brand’s less celebrated features. A series of ads that zero in on the faces of barefooted grownups who’ve just stepped on a Lego brick would serve as a funny, relatable reminder that kids need to remember to clean up after themselves, the seller says. Other than boredom, terror and disappointment, the pain associated with a rogue Lego biting into the underside of an unshod foot is one of the few universal human experiences; as such, an execution along those lines would be wildly relatable.)

Earlier in the show, Initiative U.S. CEO Amy Armstrong gives her guests a quick refresher course on the breadth of the agency’s client roster. Along with the four brands that will present toward the end of the day, sellers are read a roll call that includes the likes of Nintendo, UPS, Tik Tok, Revlon, Liberty Mutual, IHOP, Applebee’s, Canada Goose, Merck and Boeing.

Naturally, Armstrong’s primary focus has to do with Initiative’s remarkable revitalization effort, one that in a matter of days will earn the company the title of Ad Age’s Comeback Agency of the Year. Under Armstrong’s leadership, Initiative has won a number of global media accounts while developing a work culture informed and shaped by a diverse leadership team.

The efforts to promote a more cooperative and proactive in-house environment appears to have rubbed off on the clients as well. When the overhaul first began in early 2017, Initiative’s partners gave it a Net Promoter Score of negative-26. In the span of the last two years, the agency has seen its external NPS ranking soar to a plus-55, within shooting distance of Armstrong’s initial goal (plus-60).

“We’re very happy with how far we’ve come, but we’re not letting up,” Armstrong says, adding that the prevailing theme for Initiative in 2019 will be to continue the transformation that began two years ago. Look for Initiative to mash down the pedal even further on “Cultural Velocity,” a concept that draws a direct correlation between the speed at which a brand interprets and responds to cultural data signals in order to improve its relevance with consumers and the frequency with which that brand’s cash registers ring.

In other words, the faster a brand can accrue cultural capital, the faster it will rake in the more quotidian currency at the point of sale. The way Initiative sees it, all the soft metrics against which media investments are valued—impressions, reach, likes, clicks—are immaterial in the face of its results-oriented methodology.

If that’s a bold stance to take on the eve of the upfront marketplace, that early-summer interlude in which the broadcast and cable networks book advance commitments of up to $20 billion on inventory for the coming TV season, the ad sales execs on hand don’t seem to be put out by Initiative’s impatience with the paid-media paradigm. As one seller notes after the event, not all of the ambitious plans developed by Initiative are necessarily designed to be realized during the upfront, when maximizing dollar volume and the rate-of-change remains the primary objective of those on the supply side. Initiative has no interest in disrupting the upfront bazaar.

The fact that the Skirball’s orchestra seats are all occupied suggests that the various ad sales execs are more than happy to devote 90 minutes of their Friday afternoon taking in the show.

“Their approach to the marketplace is pretty unique,” says Mark Miller, executive VP, ad sales, NBCUniversal. “Whereas other agencies have their vendor days, this is almost the exact opposite, in that they’re coming to us with key accounts and actual results.”

Omnicom Media Group last month hosted its own upfront switcheroo, but as Miller alluded, that three-day Partner Summit wasn’t designed to showcase the objectives of the agency’s clients. Instead, two dozen TV nets and digital publishers headed downtown to give the OMG stable an advance look at some of the custom solutions they might be able to offer those clients in the coming year. Among the media powers that presented at the OMG summit were CBS, Viacom, Warner Media, the CW, Twitter and Condé Nast.

Miller notes that the Initiative event over the last two years has given rise to a certain kind of FOMO dynamic. “Aside from the inherent value of the presentation, I certainly wouldn’t want to miss out on it, because I know everyone I’ll be competing with [in the upfront marketplace] is going to be there,” Miller says, laughing. “It’s a jump ball, and if I’m not there someone else is going to have a leg up.”

Before the afternoon winds down, a soft drink-and-coffee mashup takes the stage. While last July’s $18.7 billion union of Keurig Green Mountain and the Dr Pepper Snapple Group made for a beverage colossus that literally runs hot and cold, much of that client’s pitch to ad sales execs has to do with the Diet Dr Pepper brand. According to Initiative Managing Director Linda Cronin, fans of the zero-calorie soda don’t seem to have acquired the beverage-specific form of object permanence. Market research has established that aided awareness of the brand is an enviable 99 percent, while unaided awareness hovers near zero.

Along with helping Diet Dr Pepper boost its profile, publishers and TV networks may be enlisted in the effort to help introduce a regional soft drink brand to a national audience. Squirt, a grapefruit-flavored concoction native to Phoenix, Arizona but all but impossible to find east of Chicago, will soon be making the jump to the big leagues, says Ryan Stevens, senior director of brand management, Keurig Dr Pepper.

While Stevens didn’t go into specifics about the plan to distribute Squirt from sea to shining sea, the brand has long been embraced by Hispanic consumers in the southwest. As such, the expansion could prove to be a unique opportunity for a Spanish-language broadcaster such as Telemundo or Univision.

As Miller gears up for NBCU’s own frenzied upfront selloff, he says he’s come away with some insights on the Initiative clients’ investment strategy that should be of use well after the summer bazaar gives way to the fall scatter market.

“I wish more agencies did this kind of thing,” he says. “Any time you can take the discussion beyond price points and the reach-frequency curve is time well spent.”