Ads for Legal Marijuana Are a Slow Burn So Far

Sales of recreational marijuana have been white-hot in Colorado since becoming legal on Jan. 1, but ad sales around the new category seem to be lagging far behind. 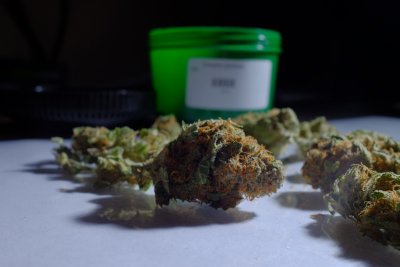 Marijuana at the Evergreen Apothecary in Denver

The Denver Post, which has marshaled its newsroom to cover the state's historic shift in drug policy, has booked only two ads so far for its new marijuana-centric website The Cannabist.

One is for the Alameda Wellness Center, a medical marijuana dispensary, and the other is for a concert venue.

Legal, recreational marijuana is "an evolving category," said Mac Tully, the Post's president-CEO. "I don't think anyone understands how it's going to end up."

The owner of one Denver marijuana dispensary said traditional ads were hardly necessary, given the rush of customers so far and all the free publicity in the media. "We don't need to advertise," said Linda Andrews, owner of Lodo Wellness Center. "We're still trying to regroup from the first wave of sales."

Lodo Wellness Center has spent some marketing dollars on WeedMaps, a kind of Yelp for the marijuana industry, Ms. Andrews said.

In nearby Boulder, the Daily Camera and Colorado Daily are still waiting for the county to allow the opening of dispensaries for recreational marijuana, said Al Manzi, president-CEO of Prairie Mountain Publishing, which publishes both newspapers. Such shops are not expected to open until late February at the earliest, and the papers have seen almost no advertising from recreational marijuana since it became legal in the state.

"I don't anticipate any impact on advertising until the outlets open and supply begins outpacing demand," Mr. Manzi said.

"The legalization of medical marijuana had a much bigger impact early on," he added. "That absolutely created a new line of revenue for us."

There is promising interest among readers and consumers, to be sure. The Denver Post has attracted more than 250,000 unique visitors to The Cannabist so far, according to Mr. Tully. "It has started out very strong and will only get better from here," he said of The Cannabist's traffic. "That will lead to opportunities on the advertising side."

The introduction of the new site also meant a widely-noted search for a marijuana editor, a position that ultimately went to Post veteran Ricardo Baca. His job is to steer the site's coverage of this historic shift in drug policy, a shift that the rest of the country is watching closely. 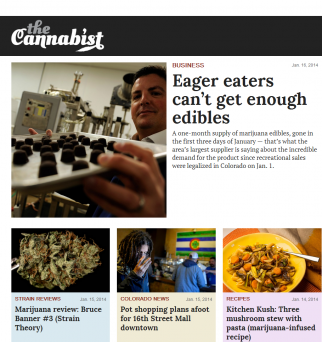 Colorado and Washington state last year became the first states to legalize recreational marijuana, but sales haven't begun in Washington yet. Dispensaries, the name for shops selling legal weed, reportedly sold more than $1 million worth of pot in Colorado on the first day that they could. At Lodo Wellness Center, Ms. Andrews has begun limiting the amount of marijuana people can buy to avoid running out. Other dispensaries across the state have reportedly followed suit.

The legal marijuana business nationwide is forecast to reach $2.3 billion in 2014, according to a report from ArcView Market Research.

Colorado's marijuana retailers are allowed to advertise statewide in newspapers and on TV and radio stations, according to regulations issued last year from the Colorado Department of Revenue. These outlets must show that no more than 30% of their audience is younger than 21.

But TV stations are moving cautiously, or not at all. The CBS affiliate in Denver, which is owned by CBS Corp., does not accept dispensary advertising, said Chris Ruggeri, director of sales at Denver's CBS affiliate, citing federal laws regulating national broadcasters. The local Fox affiliate has accepted ads from traditional head shops but not from actual dispensaries, according to Kendra Happ, the station's sales manager.

Advertising online is legal if the sites' audiences fit the age criteria, though major websites like Twitter and Google reportedly do not accept such ads.

Dispensaries cannot buy ads on billboards or in other out of home venues, nor can they advertise outside the state.

Mr. Tully said the audience for the Denver Post and The Cannabist meet the age criteria, allowing them to take ads from marijuana retailers.

But the Post isn't necessarily looking only to dispensaries to advertise around recreational pot. "We're going to have opportunities on the advertising side for revenue not just from dispensaries," Mr. Tully said. "I think it's around the lines of festivals, concerts, entertainment venues and restaurants."