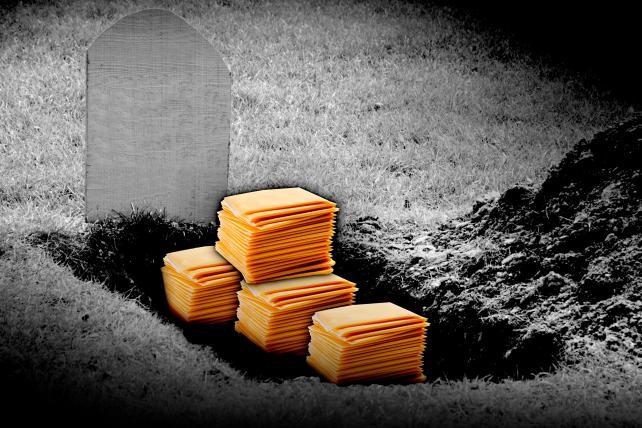 American cheese will never die. It has too many preservatives.

But it's melting away.

One by one, America's food outlets are abandoning the century-old American staple. In many cases, they're replacing it with fancier cheeses.

American cheese is "an ingredient we're looking to less and less in our pantry," says Sara Burnett, the chain's director of wellness and food policy.

American (cheese) culture is at a crossroads. The product, made famous by the greatest generation, devoured by boomers on the go and touted as the basis for macaroni and cheese, the well-documented love object of Gen X, has met its match with millennials demanding nourishment from ingredients that are both recognizable and pronounceable.

Don't rely on anecdotal evidence. The data show it, too. U.S. sales of processed cheese, including brands such as Kraft Singles and Velveeta, a mainstay of delicacies such as ballpark nachos, are projected to drop 1.6 percent this year, the fourth straight year of declines, according to Euromonitor International.

The end of the affair is also evident at the Chicago Mercantile Exchange, where 500-pound barrels of cheddar—which are used to make American cheese—are selling at a record discount to 40-pound cheddar blocks, the cheddar that shows up on party platters. That's because demand for the cheese in the barrels has been dwindling for years, according to Alyssa Badger, director of operations at Chicago-based HighGround Dairy.

American cheese isn't the point of a lot of the barrel production, Badger says. It's for the byproduct whey, a staple of pricey protein shakes.

Decline is also evident when looking at the manufacturing landscape. The number of U.S. cheese factories increased 40 percent between 2000 and 2017, but the growth is from small, specialty cheesemakers, says Matt Gould, editor at Dairy & Food Market Analyst Inc.

Prices at the grocery store for processed American cheese have been slipping, too, dipping below $4 a pound for the first time since 2011, according to the U.S. Bureau of Labor Statistics.

Gayle Voss, owner of Gayle V's Best Ever Grilled Cheese in Chicago, takes two slices of fresh-baked sourdough and fills them not with American cheese but with Wisconsin-made butterkäse cheese. It's made in small batches by farmers who know the names of their cows. It's melty and slightly stretchy, and yes, buttery. It's what people want these days, she says.

"I could buy preservative-filled cheese and butter," Voss says. "But I'm all-out on supporting small businesses and offering a good, quality product, and the minute people bite into it, they know—because it's so good." (Pause here to imagine taking a bite of crunchy bread and melted cheese that forms a string as mouth and sandwich separate.) "People want to know where their food is coming from," she says, "and my sales reflect that."

Voss says her husband will use Kraft Singles to whip up a quick sandwich for himself at home, something that cheeses her off. But it's what he grew up with, she says.

Most Americans did. American cheese was born at a time when utility reigned. James and Norman Kraft invented processed cheese in 1916 and sold it in tins to the U.S. military during World War I. Soldiers kept eating it when they returned home and its popularity soared. It wasn't until 1950 that Kraft perfected the slicing. Soon after came a machine that could individually wrap the slices, and in 1965, Kraft Singles were born.

Like Wonder Bread, society marveled at the uniformity of the product, the neatness of the slices, the long shelf life and its ability to stay moist even in the desert, in the middle of the summer, at noon.

Though 40 percent of U.S. households buy Kraft Singles, overall sales are flat, according to Peter Cotter, general manager of cheese and dairy for Kraft Heinz Co. Kraft has a 30-person research-and-development team working on ways to get American cheese into more homes, he says, offering qualities that healthier, more natural cheeses can't. For instance, "the melt."

"Honestly, you can't get that in a natural cheese," Cotter says. "It's a very unique product. The creamy smooth texture and melt of the cheese. The natural cheeses, they just don't melt that way."

The backlash to the backlash remains robust, with about $2.77 billion in retail sales this year, according to Euromonitor. Some trendy restaurants are going retro on their menus, hearkening back to somebody's idea of what a classic America might've been like before fancy cheeses ruined the youth. After all, Homer Simpson pulled an all-nighter eating 64 slices of American cheese, not gouda, provolone or even butterkäse, which, after all, just means butter cheese in German.

Burger joint Mini Mott opened this summer in Chicago's trendy Logan Square neighborhood and when diners order a cheeseburger they get American cheese. Chef Scott Sax said he buys it in five-pound bricks from a supplier in Minnesota.

"There's nothing pure or organic about it," Sax says. "The ingredients are very American."