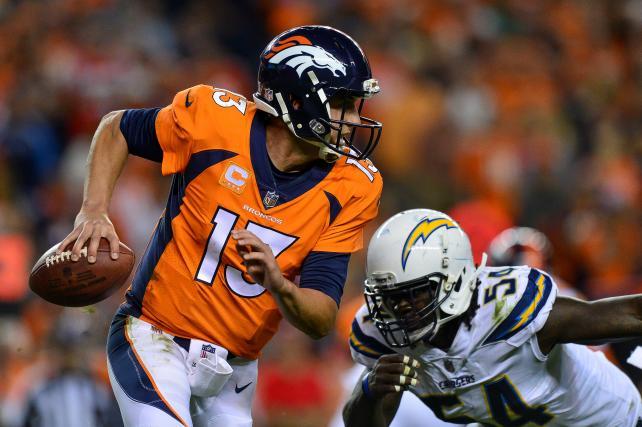 Quarterback Trevor Siemian of the Denver Broncos rolls out of the pocket against the Los Angeles Chargers at Sports Authority Field at Mile High on Monday.
Credit: Dustin Bradford/Getty Images

The last of the Hurricane Irma-delayed ratings for Week 1 of the new NFL season are in, and as was the case with all but one of the league's TV windows, ESPN's "Monday Night Football" doubleheader took a bit of a tumble.

As is nearly always the case when overall viewership takes a hit, the number of advertiser-coveted viewers ESPN delivered on Monday night was down as well. The two games averaged a 4.1 rating among adults 18 to 49, which translates to 5.22 million viewers, and 5.55 million adults 25 to 54, or a 4.6 rating. Declines in the demos were proportionate to the drop in overall viewers.

The "Monday Night Football" numbers are indicative of the linear TV ratings and do not include the number of viewers who live-streamed the games via the WatchESPN app.

Unlike the Sunday NFL windows, which sustained a 13 percent decline in overall deliveries as Irma sent millions of viewers scrambling to the Weather Channel and CNN, ESPN's declines don't appear to have been a function of storm slippage. For example, while the Weather Channel's ratings were still relatively inflated opposite "Monday Night Football," with an average draw of 840,000 viewers, its deliveries were nowhere near as elevated as they were during Sunday's 4:20 p.m. EDT game on Fox. As the Seahawks and Packers slugged it out in Green Bay, the Weather Channel averaged 4.48 million viewers.

The same pattern applied to cable news. While CNN nearly doubled its year-ago deliveries, the average net gain for all three cable news nets opposite "Monday Night Football" was fewer than 1 million viewers.

When the final ESPN numbers are baked into the mix, all NFL windows were down 13 percent year-over-year. The average draw for the six national and local broadcast windows was 17.4 million viewers, down from the 19.9 million who tuned in for the first week of the 2016 NFL season.

If ESPN had been able to flip the two Monday night games, its ratings almost certainly would've been stronger. The Broncos-Chargers game was absolutely bonkers, culminating in a blocked field goal with one second left on the clock, but given that it was well past one in the morning when the whistle finally blew, relatively few people on the east coast were able to stick around for the finale. (Such are the inherent pitfalls of kicking off the second game at 10:20 p.m. ET.)

All told, the Chargers-Broncos telecast averaged 9.94 million viewers, of which approximately 5.3 million were representatives of the 25-to-54 set. "Monday Night Football" doubleheader games rarely dip below 10 million viewers; the last time ESPN fell short of the mark was in 2007, when the late Broncos-Raiders matchup averaged 9.7 million viewers.

On the advertising front, automotive brands on Monday night nearly doubled the spend of the No. 2 category, insurance, with GMC, Toyota, Nissan and Lexus among the most visible carmakers. Liquor advertisers in NFL games still remain something of a novelty, with only Hennessy stepping up to the plate on Monday night, having invested in a 15-second sliver of airtime in the late game. (Hennessy had primed for the Chargers-Broncos game by making buys in two of ESPN's pre-season NFL games.)

Since the NFL lifted the spirits ban, three brands have dipped a toe into the waters of big-time football. Crown Royal became the first in-game advertiser with a buy in the Sept. 7 NFL Kickoff Game on NBC, while Patron took a 15-second position in the "Sunday Night Football" opener. (Crown Royal re-aired the spot that ran in the first game of the season in Sunday's Giants-Cowboys game.)

Along with the in-game "Monday Night Football" inventory ESPN sold to automakers, insurance providers, film studios, quick-service restaurants and purveyors of beverages, the network also held back a few spots for its broadcast sibling ABC. The Alphabet net ran in-game promos for its upcoming medical drama "The Good Doctor," which bows on Monday, Sept. 25 opposite ESPN's Cowboys-Cardinals showcase, and the freshman comedy "The Mayor," which premieres Tuesday, Oct. 3.

ESPN gets another crack at helping nudge the NFL's ratings into the black next week, when the New York Giants host the Detroit Lions at Met-Life Stadium.