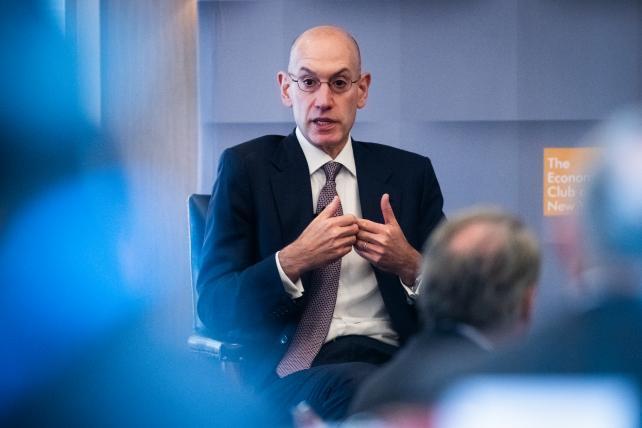 Overstuffed with star talent and buttressed by a social media policy that doesn't penalize fans for sharing snackable portions of its in-game content, the NBA is arguably more engaging than it's ever been. But despite boasting one of the youngest fan bases in sports, pro hoops remains as vulnerable to the vicissitudes of the media landscape as any other league.

In an appearance last weekend at the 13th annual MIT Sloan Sports Analytics Conference, NBA Commissioner Adam Silver acknowledged that the generational shift away from the dominant linear TV model has put the squeeze on the league's deliveries of Millennials.

"From 2010 to 2018, among 18-to-34-year-olds—and that's our core audience, it's an incredibly attractive young audience—their viewership on pay TV is down almost 50 percent," Silver said to his interlocutor, The Ringer's Bill Simmons. "So I think we're going to have to figure this out with ESPN, and with now our new partners at AT&T and WarnerMedia, how the new world looks."

An expressive speaker, Silver did not shy away from the fact that the NBA's target demo has shown little interest in subscribing to the traditional pay-TV bundles that their parents continue to prop up with their monthly payments. The impact on the NBA's media partners is striking; in the last eight years, ESPN has lost north of 14 million linear subs, while TNT has lost its footing in nearly 11 million households.

While overall NBA ratings remain robust (ESPN and TNT's weeknight doubleheaders regularly thrash the cable competition), the target audience is getting harder to reach with every passing year. Season-to-date, the league's adult deliveries of adults 18-to-34 is down 11 percent vs. the year-ago period, with each game averaging around 435,000 members of the demo. Last year, that number was in the neighborhood of 490,000 viewers.

The damage hasn't been parceled out equally. TNT is taking the brunt of it, with its advertiser-friendly demo sinking 18 percent to some 453,000 viewers, while ESPN games are off 6 percent to 435,000. ABC, which thus far has aired 11 NBA games, including three on Christmas Day, is flat with an average draw of a 1.3 rating, good for around 900,000 adults 18-to-34.

"We know, from every bit of research we have from all the social media platforms, there's more interest in our product than the ratings reflect, but the problem is there's a large pool of audience out there for us that don't pay for basic cable," Silver said. He added that micropayments that ensure instant access to games in progress would go a long way toward restoring the demographic balance.

"Think about it: You're on Twitter and you get a tweet from somebody who says Warriors, Rockets, great matchup, you know, Harden's going for 60 points or whatever, and the fact that you can't just go titch [click] and get that game is what's so frustrating for me," Silver said. "I think all of us would pay for that content, pay a buck or whatever else, you know, but… there's a transactional friction that has to be eliminated.

"And I get it, we're being paid a lot of money to gate our content right now from ABC and ESPN and from TNT, but what's happening is demand and supply aren't meeting right now.… And I think that's a problem that we'll be able to figure out over time."

That Disney and WarnerMedia do pay a princely sum for the rights to carry NBA games—in 2014, TNT and ESPN/ABC agreed to re-up their contracts with the league in a nine-year, $24 billion extension—puts something of a damper on Silver's instant-gratification scheme. While ESPN would likely support an NBA micropayment scheme that also could help draft subscribers to its new-ish ESPN+ service, Turner has already kicked the tires on the fractional game plan. Turner, which also manages the NBA's digital-media properties, has experimented with a promotion that allows fans to stream the fourth quarter of any out-of-market game on its B/R Live service.

That the buy-on-the fly model is being hashed out while legalized sports gambling begins to take flight is no coincidence. When and if live, in-play betting becomes the norm, gamblers more than any other subset of sports enthusiasts will likely be inclined to invest a few bucks in the final 12 minutes of gameplay.

If nothing else, it allows bettors an opportunity to more easily monitor their action without having to commit to a full NBA League Pass subscription; that said, the real selling point of the intersection of live sports and data has to do with how such a synthesis will serve to further the adoption of in-play wagering. In England, where you can risk money on just about any proposition—one bookmaker offered odds on whether Prince Harry would appear clean-shaven for his wedding to Meghan Markle—dynamic wagering accounts for as much as 85 percent of all sports betting.

Silver went on to note that many pay-TV subscribers believe that live sports is now pretty much the only thing that justifies their monthly cable bill. The commish noted that back in 2000, live sports accounted for only 13 of the 100 top-rated shows on television. "Last year it was 89 out of the top 100 shows," he added. (You don't say!)

"Short of breaking news, anything else you're going to watch whenever you want to watch it," Silver said. "So that's great news on one hand but it's also troubling on another, because you have to condition a new generation that 8 p.m. on Tuesday is 8 p.m. on Tuesday. Because it's perishable. And unless we can create new products around our game—and maybe we can—you still want to watch it live and not know the outcome."

As much as the NBA must adjust to meet the demands of the rapidly [d]evolving media space, Silver said changes to any aspect of the game must be made with a great deal of caution and deliberation. "It's always this balance between the fundamentalists, the traditionalists and keeping up and making sure your game, your product, is exciting and continues to garner people's interest," he said, before adding that he's had ideas Dikembe Mutumbo-ed by the keepers of the NBA flame. Revealing that he'd once suggested adding the new wrinkle of a 4-point shot to the All-Star Game, Silver recalled that the competition committee all but threw him out of the room, harrumphing something along the lines of, "This is not 'MTV Rock n' Jock Basketball!'"

In addition to some thoughts about the obstacles in the way of carving down the regular season from the current last of 82 games to a more manageable 72, Silver told Simmons that he was also toying with the idea of a mid-season, single-elimination tournament. However that particular concept shakes out, Silver made it clear that something needs to be done about the increasingly inessential spectacle that is the NBA All-Star Game.

"It may be that the notion of an All-Star Game is antiquated, I get it. We put another earring on the pig, so to speak, with the draft, the selection and all that, and it didn't work as well this year as it did the prior year," Silver said. "If you're there in person it's a really fun weekend, I think, and it's a great gathering of everyone in the so-called NBA family, but the game itself is a bit of an afterthought."

If the Nielsen data is anything to go by, Millennials appear to agree with Silver's assessment. Of the 6.8 million viewers who tuned in to the 2019 NBA All-Star Game, only a quarter (1.8 million) were representatives of the adults 18-to-34 set. That marked a 24 percent decline compared to last year's exhibition.

As much as sports are by their very nature communal events, media is increasingly a commodity that is consumed in solitude. Younger Americans are especially prone to isolating themselves with their screen of choice, and Silver said NBA players are not exempt from this sort of self-sequestering.

"I think we live a bit in the age of anxiety," he said, before suggesting that the camaraderie of the Michael Jordan era has been replaced by an unshakable addiction to the little glowing screen and the false community fostered by social media. "The Bulls were like a band of brothers. If you're around a team in this day and age, there are headphones always on, their heads are always down.

"And I don't think it's unique to these players,'' Silver added. "I don't think it's something that's just going on with superstar athletes. I think it's a generational issue, it's this incredible issue with isolation, to the point where it's almost a pathology.''