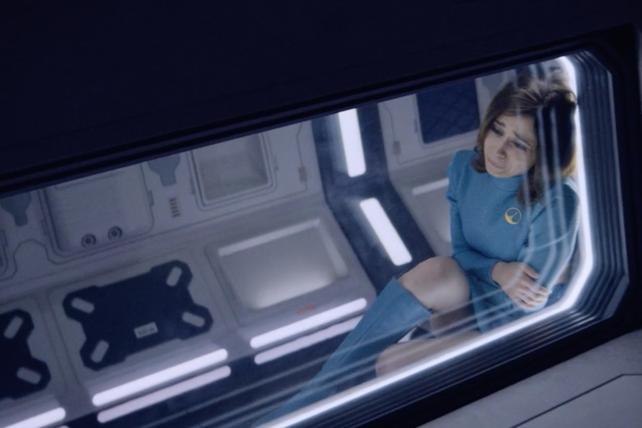 A scene from a recent season of 'Black Mirror.'
Credit: Netflix

Netflix is about to let you decide how your favorite show will end.

The streaming service is developing a slate of specials that will let viewers choose the next storyline in a TV episode or movie, according to people familiar with the matter. The company expects to release the first of these projects before the end of this year, said the people, who asked not to be identified because the plans are still private.

Viewers will get to choose their own storylines in one episode of the upcoming season of "Black Mirror," the Emmy-winning science-fiction anthology series. The show is famous for exploring the social implications of technology, including an episode where humans jockey to receive higher ratings from their peers. The fifth season of the show is expected to be released in December.

The foray into choose-your-own-adventure programming represents a big bet on a nascent form of entertainment known as interactive TV. As Netflix expands around the world, it's looking for new ways to lure customers. By blending elements of video games with traditional television, the company could create a formula that can be applied to any number of series.

Netflix upended the business model of television by delivering new episodes of a season all at once -- letting viewers watch shows on-demand rather than live. But so far, the two-decade-old company has done little to change the way shows are conceived or produced. It releases the same 25-minute sitcoms, hourlong documentaries and two-hour movies as other TV networks.

Netflix has already released a handful of episodes of choose-your-own-adventure animated programs designed for kids. Within the first couple minutes off "Puss in Book," the viewer must choose whether the pugilistic feline fights a god or a tree. After watching one version, the viewer can go back and choose the alternate scenario.

Netflix also is about to release a new animated series based on the popular video game "Minecraft." Telltale Games, the company that was working with Netflix on the show, recently laid off most of its staff. But the show, based on one of the world's most popular video games, is mostly finished and will be released later this year.

The "Black Mirror" episode is the first of several experiments with live-action interactive programming for Netflix, and the first interactive show designed for adult viewers. The Los Gatos, California-based company has closed a deal for at least one more live-action project, and is negotiating the rights to others, said the people.

Two of the projects are adaptations of video games, though Netflix has no plans to start releasing video games -- contrary to recent reports.

This new type of narrative can complicate the production, and dealmaking. While a traditional movie has a 100-page script, a two-hour experience needs to have a longer script and production to account for all the different scenarios. Writers and producers are still determining how the extra demands affect their pay, among other matters.

Former journalist Charlie Brooker created "Black Mirror" in 2011 for the British TV network Channel 4 and oversaw four seasons alongside Annabel Jones. Netflix got on board in 2015, acquiring the rights to past episodes and the rights to release future seasons.

Two of the four previous seasons of "Black Mirror" have debuted in December, including the most recent six episodes. Production of the fifth season began earlier this year.

The stories that branch off from the main narrative of "Black Mirror" will be more complex than the options in the kids' programming, though it remains to be seen just how complicated the show will be. Consumer experience is paramount at Netflix, which employs executives who test everything from the quality of mobile networks in Mumbai to Brazilians' preferences for subtitles versus dubbing.

Producers of interactive TV are hoping Netflix's growing investment is a sign that their time in the spotlight is approaching. HBO, one of Netflix's fiercest rivals, released its first interactive TV show earlier this year. Directed by Steven Soderbergh, the longer version of "Mosaic" was available in a separate app.

While many TV viewers have voted for candidates in reality programs like "American Idol" and "The Voice," no narrative TV show that asked viewers to engage with the plot has become a big hit.

That could soon change, said Jim Spare, the chief operating officer of Eko, a company that produces interactive shows. The widespread availability of high-speed internet, the prevalence of touch screens and interactive games have all laid the groundwork for shows that ask the viewer to engage.

"The time is right for interactive TV to become a mainstream experience," he said.