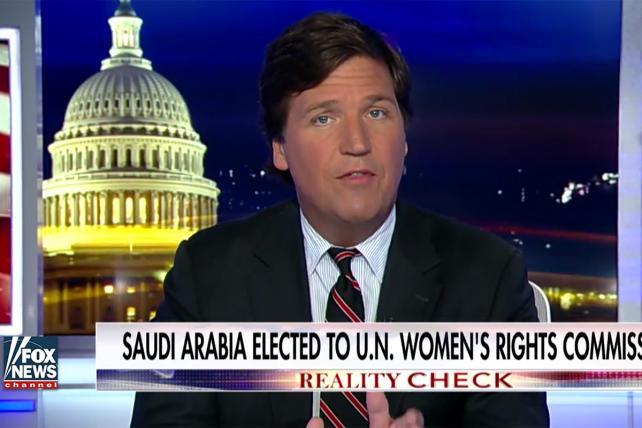 After a sexual harassment scandal and subsequent advertiser boycott effectively put the top-rated cable news show out to pasture a week ago, sponsors have begun drifting back to the time slot "The O'Reilly Factor" occupied for more than two decades.

While the volume of advertisers in the first 8 p.m. edition of Fox News Channel's "Tucker Carlson Tonight" was relatively light -- with 17 brands accounting for nine minutes of airtime, the commercial load was at half-strength compared to the hour's standard array -- Monday night's opener was graced by a number of sponsors that had pulled out of "The O'Reilly Factor" in the midst of a three-week freeze-out.

Perhaps the most visible brand to return to Fox News' 8 p.m. time slot is Mercedes-Benz, which ran a 30-second spot for its 2017 GLE350 SUV in Carlson's first-run telecast. One of the very first advertisers to pull its dollars out of "The O'Reilly Factor" in the wake of the April 1 New York Times exposé on its host, Mercedes continued to run its spots in Carlson's 9 p.m. show and its lead-out, "Hannity."

Mercedes was one of three car manufacturers to buy time in Carlson's new window, as it was joined in the hour by Infiniti and Honda. Like Mercedes, Infiniti pulled its commercial messaging from "The O'Reilly Factor" in the first round of sponsor defections, while Honda had managed to largely steer clear of the program altogether. (According to iSpot.tv data, Honda ads appeared in O'Reilly's show just four times since Jan. 1, 2016.)

The reemergence of the auto category presented a marked contrast to what had populated Fox News' prime-time anchor slot over the course of the last three weeks. As national advertisers jumped ship, "The O'Reilly Factor" was left with a dog's breakfast of direct-response marketers, dealers in precious metals and cut-rate life insurance plans. Toward the end of the show's run, during an April 19 installment hosted by Dana Perino just hours after Fox News announced that they had parted ways with O'Reilly, the "Factor" spot load had been winnowed down to just eight-and-a-half minutes of airtime divvied up among nine advertisers.

Mercedes and Infiniti weren't the only defectors to return to the 8 p.m. fold; other sponsors who had walked out on O'Reilly only to come back on the first night of Carlson's new hour were: Jenny Craig, Bayer (Claritin), Untuckit, Old Dominion Freight and ancestry.com.

"Our concern was with the disturbing allegations made against Bill O'Reilly, and not with Fox [News] in general, although we were naturally monitoring their handling of these allegations," Untuckit CEO Aaron Sanandres said last week. "Fox indicated their decision to terminate his contract was made after a thorough and careful review of the facts, and so it appears it was a fully informed one. I fully respect their decision and commend Fox for taking action. Accordingly, we plan to continue to allocate a portion of our advertising dollars to Fox."

If nothing else, the initial round of advertisers that have come back to the 8 p.m. slot is a reminder that brands rarely turn their backs on entire networks, especially when the programming on said networks gels with their marketing objectives. And in cable news, nothing draws a bigger crowd of would-be consumers than Fox News' prime-time roster. According to Nielsen, cable's top three news programs in the first quarter of 2017 were "The O'Reilly Factor," which averaged 3.98 million viewers and a 0.61 rating in the adults 25-54 demo, "Tucker Carlson Tonight" (3.27 million viewers, 0.57) and "Hannity" (2.87 million, 0.56).

If Carlson can continue to put up big numbers in his new perch, there's little reason to suspect that the dozens of other advertisers who pulled their dollars out of O'Reilly's show won't reverse course. Time slots aren't haunted, and many of those who fled the "Factor" simply re-allocated that spend in Carlson's 9 p.m. show and elsewhere on the Fox News schedule.

As Carlson grows into his new digs, all eyes will be on his ratings and advertiser roster. Should the likes of BMW, Hyundai, Lexus, Subaru, Allstate, GlaxoSmithKline and Eli Lilly make their way back to the 8 p.m. fold in the coming weeks, it would go a long way toward re-establishing a sense of normalcy as Fox News heads into the upfront season.

According to Standard Media Index data, the average unit cost for a 30-second spot in "The O'Reilly Factor" in January and February was $15,038 a pop, up 41% compared with the year-ago rate and about $3,000 north of that fetched by Carlson's 9 p.m. show. By comparison, spots in CNN's "Anderson Cooper 360" and Rachel Maddow's MSNBC program cost about a third of what "Tucker Carlson Tonight" commands.

If the going rate for 30 seconds of airtime in the Fox News shows seems like a bargain, the value of a unit is directly proportional to the lineup's audience composition. According to Nielsen, 79% of those tuning in to "Tucker Carlson Tonight" in the first three months of the year were not members of the guaranteed adults 25-54 demo.