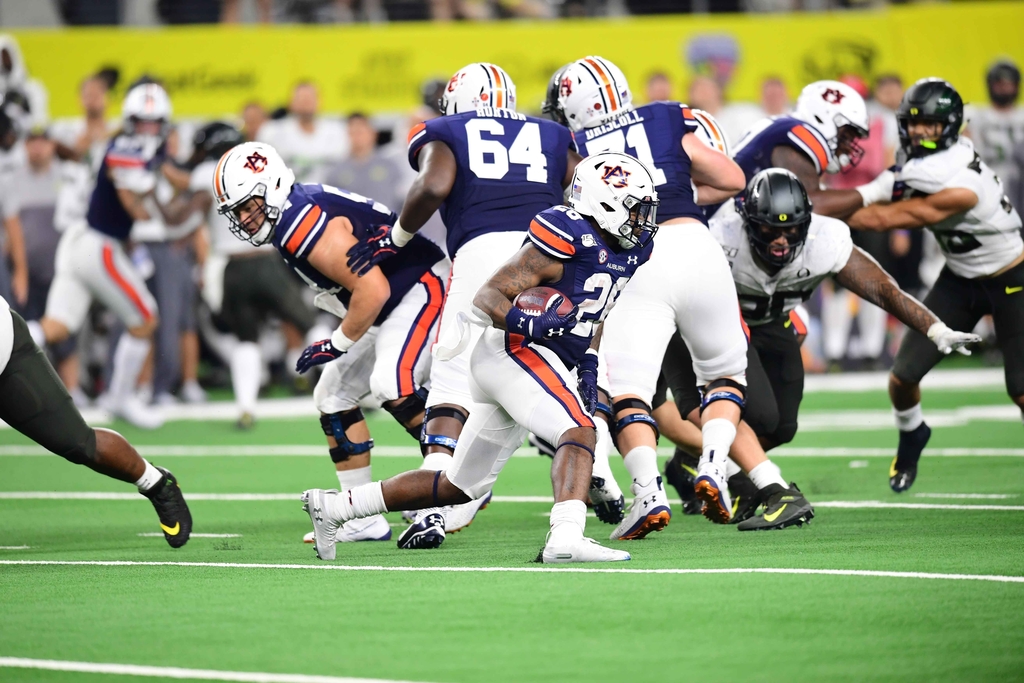 Oregon-Auburn was the most-watched sporting event since the MLB All-Star Game on July 9.

For the first time since 2014, the Alabama Crimson Tide were not featured in “ESPN’s Saturday Night Football” opener, and while Nick Saban’s charges tend to reward the networks with big ratings numbers, their arch-rivals Auburn more than made up for their absence.

ESPN’s broadcast sibling undoubtedly benefited from the fourth-quarter heroics of Auburn quarterback Bo Nix. Down 21-20 with just 9 seconds on the game clock, the true freshman connected with Seth Williams for a 26-yard touchdown pass that gave the Tigers the win.

Here’s another way to look at Saturday night’s numbers. Last season, only 19 episodes of ABC scripted series drew higher ratings than the Oregon-Auburn game; for those keeping score at home, six episodes of “The Conners,” five episodes of “The Good Doctor” and eight installments of “Grey’s Anatomy” topped the 6.86 million mark in 2018-19.

Of course, context works both ways. As much as the Oregon-Auburn nail-biter drew a crowd, the results weren’t anywhere near as impressive as the 2017 “Saturday Night Football” premiere. That game, which featured No. 1 'Bama and No. 3 Florida State, averaged a staggering 12.3 million linear TV viewers and a 6.9 rating.

“ESPN’s Saturday Night Football” rolls on this weekend with a battle between No. 6 LSU and No. 9 Texas, while the Sept 14 game sees the college football crew head to Syracuse, where the No. 21 Orange take on their top-rated ACC foes, Clemson. Syracuse, which went into its 2017 meeting with Clemson as 24-point underdogs, beat the Tigers 27-24 in a stunner at the Carrier Dome. Last season, the eventual national champions would have to come from behind in Death Valley to scuttle Syracuse’s latest upset bid; Travis Etienne’s two-yard touchdown run with 41 ticks on the clock allowed Clemson to hold off 'Cuse for the win.

Elsewhere, Fox kicked off its “Big Noon Saturday” window with a one-sided Florida Atlantic-Ohio State mix-up that averaged 2.62 million viewers and a 1.6 rating, making it the top-rated college game in the time slot. The TV turnout for the Buckeyes’ 45-21 win over the Owls nearly doubled that of the year-ago Florida Atlantic-Oklahoma broadcast (1.39 million/0.9).

Fox began developing its early-afternoon strategy at the end of last season, when it became apparent that its five most-watched college football games had kicked off at noon ET. (Each of the five were Big Ten games, and the biggest of the bunch was the annual Michigan-Ohio State donnybrook, which scared up 13.2 million viewers and a 7.5 rating on Now. 24.)

“In the college space, we’ve adjusted our thinking a little bit and we’ve started to think of ourselves as counter-punchers,” explained Fox Sports Head of Strategy and Research Mike Mulvihill during an April upfront pitch to clients in New York. “It’s dawned on us that we don’t have to always put our best game every week on primetime. So this year we wanted to … commit to always having our best game in the noon Eastern window where it’ll face softer competition than it would at 3:30 p.m. or in primetime.”

Fox served up some 288.1 million ad impressions with its noon opener, per iSpot. Among the top spenders in the broadcast were Geico, Chick-fil-A, Mike’s Hard Lemonade, Progressive and Toyota. Next up for Fox are Army and No. 7 Michigan.

The competition for Saturday GRPs will get even tighter when CBS kicks off its SEC schedule on Sept. 14. The broadcaster leads off with No. 2 Alabama and the unranked South Carolina Gamecocks.