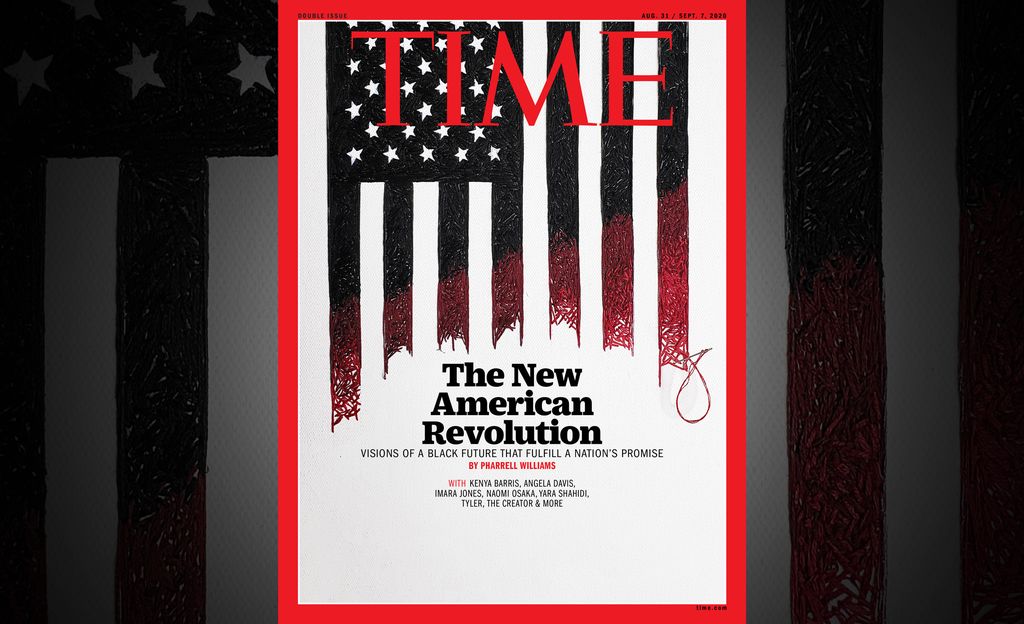 The Aug. 31-Sept. 7 double issue of Time, on newsstands Friday, centers around a “New American Revolution” package masterminded by Pharrell Williams—and is timed to coincide with the release of a new song, “Entrepreneur,” a collaboration with Jay-Z.

In a statement about the issue, the newsweekly says the idea was to give Williams free reign to curate “a series of essays and conversations between Black leaders that explore America’s oppressive past and visions for a more equitable future,” and it starts with the cover art of an unfinished American flag, rendered in embroidery on canvas, by the artist Nneka Jones, 23. (Read about the making of the cover here.)

In an introductory essay, Williams writes,

I asked some of the most qualified people I know in every field—from Angela Davis to Tyler, the Creator, to Representative Barbara Lee—to talk with us, and with one another, about the way forward. I wanted to convey a vision of a future filled with the artists, creators and entrepreneurs who can fulfill the promise of this country’s principles.

For more than 400 years, the only path to the American Dream was an access-restricted, privately owned road. Black Americans have never been free to harvest the fruit of America’s bounty, even though we were forced to do the field work. Ensuring that every citizen has the same opportunity to succeed and flourish—regardless of class, gender or skin color—is as patriotic a principle as declaring “no taxation without representation.” It is the only way to guarantee life, liberty and the pursuit of happiness.

And listen here for a brief preview of “Entrepreneur”—Time calls it “a celebration of Black ambition”—set for release at midnight Friday.