Scant turnout greets new and returning broadcast TV shows
READ THIS NEXT
How Snapchat is chasing TikTok while creators chase the Spotlight ... and the cash 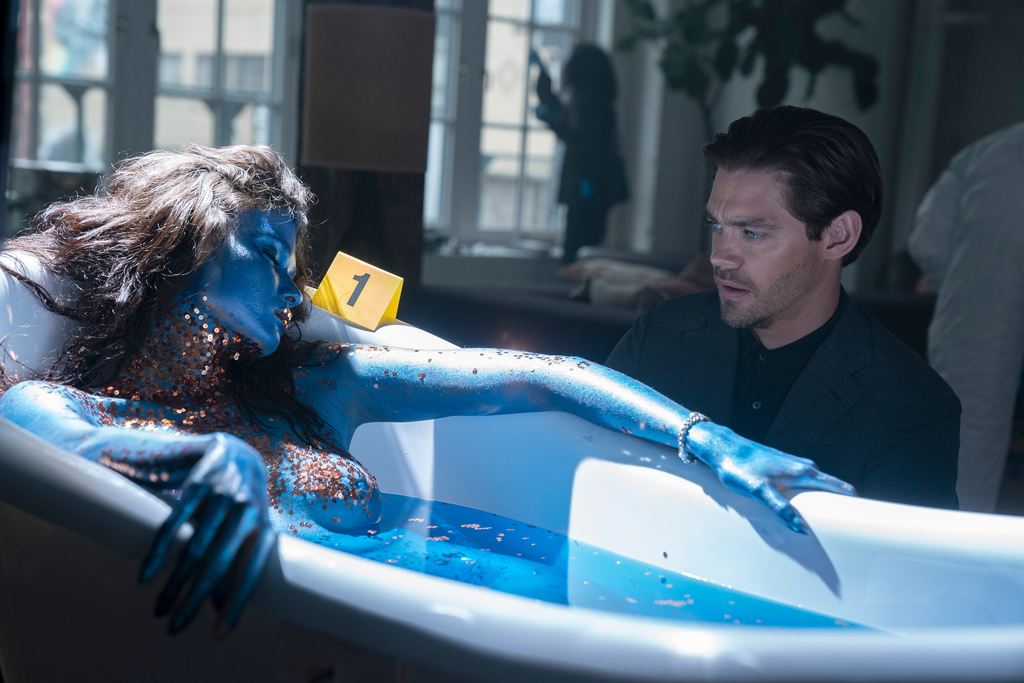 If the sky isn’t exactly falling on the broadcast TV advertising model, it certainly seems to be a lot closer to the ground than it once was. The ongoing flight of younger viewers from linear television has made a hash of what’s traditionally been a week for sampling new shows and revisiting old favorites, and while the marketing money continues to roll right in, those brands investing in primetime programming are reaching an ever-diminishing subset of would-be consumers.

According to the Nielsen live-plus-same-day data, the first week of the 2019-20 broadcast season was largely ignored by adults 18-49, as deliveries in the all-important demo fell 12 percent year-over-year to under a 1.4 rating. On average, the Big Four networks during Premiere Week drew just 1.75 million members of the advertiser-coveted group per night, down from nearly 2 million in the year-ago period. This rate of attrition is consistent with a trend that started well before veteran scripted series such as “NCIS” and “Grey’s Anatomy” splashed onto the scene; in three years, Premiere Week deliveries have fallen 28 percent; in five years, they’ve dropped 43 percent.

Before we get into the particulars of the Sept. 23-29 doldrums, it’s worth noting that the networks last week set all sorts of unenviable ratings records, which naturally are a reflection of a cultural shift away from live TV viewing. For example, this year’s opener marked the first time one of the Big Four failed to average as much as a 1.0 in the dollar demo; in eking out a 0.9 rating, ABC’s Premiere Week deliveries were down 25 percent compared to the analogous period in 2018. (This during what historically has been the highest-rated week on the broadcast calendar.) In another undesirable first, none of the broadcast networks last week managed to average a 2.0 in the demo, and while NBC (1.8) and Fox (1.7) may have been in the neighborhood, CBS (1.0) was off with ABC in another zip code.

If you’re a network ad sales exec or a marketer who spends a good chunk of change on broadcast inventory, you’d be forgiven for wanting to avert your gaze. It gets worse.

Better the devil you know

At the risk of indulging in the most cynical form of hyperbole, America effectively wanted very little to do with TV’s first wave of new fall shows. Imagine starting a new job and going around the office to introduce yourself, only to have your new colleagues either ignore you outright or greet you with howls of derision and savage beatings. While this scenario brings up all sorts of questions about your H.R. representative—in media, we usually reserve the fisticuffs for the December holiday party—as analogies go, it’s not far off the mark.

Of the 13 new series that debuted last week, only one (Fox’s kicky psychological thriller “Prodigal Son”) managed to scare up a 1.0 in the 18-49 demo. The average draw for this baker’s dozen was a meager 0.7 rating, which is exactly half the 1.4 rating notched by the 10 newbies from a year ago.

It’s difficult to imagine a new show getting a less enthusiastic welcome than NBC’s “Sunnyside,” which bowed Thursday night in the 9:30 p.m. time slot to just 1.77 million viewers and a 0.4 rating. In other words, only 555,000 viewers 18-49 tuned in for the ensemble comedy, which marks an all-time low for an in-season scripted series premiere. Five years ago, NBC pulled the plug on its new sitcom “A to Z” a few weeks after it bowed to a 1.2 rating (1.5 million adults 18-49); fortunately for the people who work on “Sunnyside,” the new broadcast reality sees to it that nothing ever gets canceled.

The baseline of acceptable deliveries has been so diminished by the overall erosion in the demos that even hardliner CBS no longer brings out the hook at the first sign of a struggle. Back in October 2013, the comedy “We Are Men” bowed to such a disastrously low rating—2.0, a number that today’s network presidents would greet with flowers and song—that it was pulled the following week; if “Carol’s Second Act” had existed seven years ago and delivered the 0.7 rating it managed on Thursday night, Nina Tassler would have canceled the show after the first commercial break.

CBS’s target demo is in the 25-54 range, although even by that measure, the Patricia Heaton vehicle isn’t exactly going to make anyone forget “Everybody Loves Raymond.” Per Nielsen, the comedy’s premiere averaged 1.6 million adults 25-54, and while that topped the foundering “Sunnyside” by a cool million, it was also the lowest-ever turnout for a new CBS comedy. (“The Unicorn” avoided that unfortunate distinction in the 8:30 p.m. slot by drawing 18,000 more members of the demo than did “Carol’s Second Act.”)

As much as it’s rare for a 10 p.m. series to break out, last week’s drama premieres were particularly discouraging. Hampered by its weak “Carol” lead-in, CBS’s supernatural drama “Evil” bowed to 4.56 million viewers, a 0.6 adults 18-49 rating and a 1.1 in the target demo, while NBC’s “Bluff City Law” squandered 53 percent of the audience that had been tuned in to precursor “The Voice.” That the Jimmy Smits showcase managed just a 0.8 rating after “The Voice” posted a 1.7 is bad enough, but comparisons to last year’s “Manifest” premiere are downright grim. The 1.05 million adults 18-49 who watched the “Bluff City” opener marked a 62 percent decline vs. the “Manifest” debut (2.78 million), and now stands as the all-time smallest demo delivery for a post-“Voice” premiere.

While you needn’t be a MENSA candidate in order to deduce that the drop in younger viewers coincides with an ossification of the primetime audience, the Premiere Week numbers are almost startling. The median age of those who tuned into the Big Four nets last week was 58.8 years old, or nearly 10 years north of the demographic terminus. That’s up from 57.5 in the year-ago period.

The aging of the American TV viewer is thrown into high relief when the data for the individual series is chopped and sorted. Premiere Week’s oldest audience was drawn in last Friday by CBS’s “Blue Bloods,” as the one-hour cop drama posted a median age of 70 years. Unsurprisingly, CBS’s Friday-night slate delivered the week’s most mature audiences, with “Magnum PI” (67.2) and “Hawaii Five-0” (66.2) reaching only a slightly more sprightly crowd than “Blue Bloods.”

Younger viewers abandoned Friday night TV decades ago, and that mass defection is apparent in the TV usage levels; whereas 80.1 million people watched television on on Sept. 27 (this estimate includes the broadcast networks, ad-supported and premium cable and PBS stations), some 94.1 million were parked in front of the tube on the following Sunday night.

Other Geritol-swigging audiences include those that watched CBS’s “FBI” and ABC’s “Dancing with the Stars,” both of which delivered a median age of 66.3 years. CBS was the week’s eldest-skewing network, serving up a median age of 63.2 years across primetime, up from its year-ago 61.6, while NBC (59.2), ABC (58.5) and Fox (52.4) also served up a whole lot of demographic chaff.

Fox can lay claim to broadcast’s youngest-skewing show in “Bob’s Burgers” (44.9), but as much as the “Animation Domination” lineup reaches a relatively apple-cheeked crowd, the comedy block has aged significantly in the last year. Without the benefit of a big NFL lead-in, “The Simpsons,” newcomer “Bless the Harts,” “Bob’s Burgers” and “Family Guy” together reached an aggregate audience with a median age of 45.9 years. That’s up 3.5 years, or 8 percent, compared to last year’s 42.4. Which, come to think of it, is about how old Bart Simpson would be today were he an actual human being rather than a series of moving illustrations. If you think that’s depressing, don’t look at the actuarial charts for Homer, who’d almost certainly be moldering away in a quiet grave right now. D’oh!

If scouring the weekly ratings charts turned up only a few bright spots—“The Masked Singer” (2.5) was the only entertainment program to top a 2.0 in the demo, while “This Is Us” put up a solid 1.8 and “60 Minutes” kicked off its 52nd season in front of 11.8 million viewers, of whom 3.1 million were adults 25-54—the National Football League did its usual job of keeping its media partners chuffed.

According to iSpot.tv estimates, the Dallas-New Orleans game dished out a staggering 2.3 billion commercial impressions. Among the biggest spenders in Sunday night’s game were official NFL sponsors Tide and Hyundai, as well as “Sunday Night Football” halftime show sponsor Toyota. Thirty-second spots in the broadcast fetched around $800,000 a pop.

Season-to-date, “Sunday Night Football” deliveries are up 6 percent to an average 20.9 million viewers and a 12.1 household rating. NBC’s broadcast is also the fastest-growing NFL package; per Nielsen, with an average draw of 16.2 minion viewers and a 9.4 rating, the six weekly TV windows are currently up 3 percent year-to-year.

Football also gave ABC its highest rating of the week, as the “Saturday Night Football” matchup between the Ohio State Buckeyes and Nebraska Cornhuskers delivered 6.17 million viewers and a 1.6 in the 18-49 demo. That was sufficient to top “Grey’s Anatomy,” which entered its 16th season on ABC with a 1.5 rating.

If football is the only thing keeping the lights on at the Big Four, it would be folly to assume that the drag on entertainment programming is slowing the endless flow of ad dollars to TV. According to Standard Media Index data, the four networks in Premiere Week of 2018 raked in $171.1 million in primetime ad sales revenue, a figure that factors in the inventory salted away for make-goods (about 18 percent).

Per SMI analysis, the broadcasters last year at this time commanded an average unit cost of around $152.7 million per 30-second spot. Given the vicissitudes of the national TV marketplace, elementary supply-and-demand economics tells us that the Big Four should scoop up even more ad bucks this fall, as marketers continue to fork over higher rates while chasing after those dwindling GRPs.