How Saks Fifth Avenue Is Using Content to Burnish Its Image

Department Store Is Publishing 'Magalogues'
READ THIS NEXT
‘America Must Change’: The story behind Time’s latest cover artwork
The covers of Saks Fifth Avenue's fall men's and women's catalogues.
Credit: 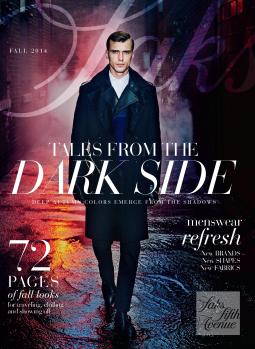 Saks Fifth Avenue, the nearly 90-year-old department store that's in the thick of a rebranding effort, is looking to content to help polish its image and, in the long run, boost sales. This fall, the company's men's and women's catalogues will adopt the look and feel of a fashion magazine with features meant to highlight trends and demystify new styles and cover lines promising "186 Revelations from the Fall Runway" and "Tales from the Dark Side."

More than a dozen editors, stylists and fashion photographers who also work with some of the top fashion magazines -- such as Conde Nast's W and GQ, and Hearst's Elle, Harper's Bazaar and Esquire -- have contributed to the catalogues. They include W magazine contributing fashion editor Giovanna Battaglia, Esquire Fashion Director Nick Sullivan and photographer Yelena Yemchuk, according to a Saks spokeswoman.

The editors "devised a wonderful book and a pace that keeps the customer engaged and gets them to carry on in the stores and online," Mr. Briggs told Ad Age. The effort should ultimately create "awareness of the brand and even further loyalty and drive more sales for the brand," he added.

Saks is embracing an emerging trend among retailers, which are publishing catalogues that look a lot like magazines. They're often called "magalogues" for that reason. Digital startups that specialize in e-commerce are leading the trend, with sites like Net-A-Porter, Asos and Frank & Oak putting out glossy magazines, some of which even sell at newsstands. But bricks-and-mortar companies have adopted the tactic, including luxury department store Bergdorf Goodman and boutique stores like Saturdays, which has published three quarterlies that sell for $25. There will be no charge for Saks' offering.

"Bringing that concept to life in a real magazine is a strong opportunity for Saks to put itself in the hands of the customer, literally, and drive serendipity," Shenan Reed, president of digital MEC North America, said in an email.

It also fits into the trend of brands -- whether consumer-facing or business-to-business -- becoming publishers as they adopt so-called content-marketing strategies.

Of course, print magazines are enduring a years-long decline in readership and advertising pages as readers and brands shift their attention and their money to other media outlets, including the web. When brands adopt a print strategy, they should also look to avoid the problems facing print publishers.

"My concern for them is that they are going to spend a great deal of time, effort and presumably money getting great stories written, beautiful photographs shot and a great magazine printed, but will not leverage all of it in digital channels as well," Ms. Reed said. "They will need to have a rock-solid digital strategy."

Mr. Briggs said creative themes in both the men's and women's catalogues will extend to in-store visuals and displays, the Saks website and social channels and media such as print magazine ads.

The look and feel of all these efforts, Mr. Briggs added, will remain consistent whether it's in the store, the magalogue or online.

It's all part of a broader rebranding effort at Saks, which was acquired in July 2013 by the Canadian department store chain Hudson's Bay for about $2.4 billion. "Saks is fortunate to have such an amazing brand heritage already, but we want to dust off the covers and breathe life into the brand," Mr. Briggs said.

The brand refresh includes an influx of fashion-forward -- and very expensive -- designer looks, a premium on service and renovations of its flagship store in New York.

Hudson's Bay, a middle-market retailer founded as a fur-trading company in the 17th century, tapped executives from the high-end London department store Harrods to lead the makeover. Mr. Briggs, for instance, spent 24 years at Harrods, where he rose to store image director. He worked closely with Harrods Chief Merchant Marigay McKee, who is now president of Saks Fifth Avenue.

Same-store sales at Saks Fifth Avenue grew 2.6% during the quarter ending May 3.