Media companies and marketers are watching the development of social TV closely. But when viewers constantly use their computers or mobile devices during their favorite shows, won't they wind up seeing less of the show itself? 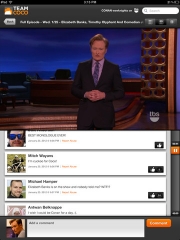 Interacting with social media on a second screen makes viewers more engaged in programming than if they were watching alone without social media, according to the study by Time Warner Research Council. Instead of distracting viewers, it merely augments the way that they view TV.

It's true that connected devices are increasingly crowding the viewing experience. "Normally I watch TV with my roommates," said one study participant. "We all have our laptops, our cell phones out, and we'll just talk about what's going on the TV, and then we're tweeting."

"We're always on our electronics," he added.

But all that may actually be helping viewers maintain their focus. "The most important overall finding is to understand that people use media to optimize their levels of interest and excitement," said Jack Wakshlag, chief research officer at Turner Broadcasting, a Time Warner unit that collaborated with the research council, sibling Warner Bros. and the research companies Innerscope and Ipsos. "When they find something engaging on the TV, they pay attention. When their interest wanes, in the absence of a second screen they could change the channel, get up, read a magazine, etc. With a second screen that allows live social engagement, they have more reason to stay on-channel with their friend."

The researchers used biometric monitoring and eye tracking to gauge 126 Millennial viewers' engagement with episodes of "Conan" and "TMZ" as they participated in varying levels of social behavior. They found that viewer engagement levels while watching with a friend or connecting with a friend over social media were 1.3 times higher than for people watching alone and not using social media. Engagement among those using co-viewing apps, designed to deliver content and allow conversation in sync with the program, proved 1.2 times more engaged than those viewing alone without a social app.

"I would be less into a show if someone took away all my social media," said one female participant, "because you wouldn't have somebody else to share that with and get them involved into it."

Even when viewers turn to social media during commercials, the study suggested that they still pay attention to the TV -- sometimes more than they think. Eye-tracking results revealed that viewers responded to audio cues, for example, both on the shows and during commercial breaks.

Viewers also seemed to appreciate brands that associated themselves with the second-screen experience, such as AT&T, which sponsored a Team Coco app to use while watching "Conan." A post-study survey showed that AT&T's brand favorability among those that used the app was 33% higher than those who didn't use it.