One Sulzberger Is Exiting The New York Times Publisher Post, Another Is Taking Over | Ad Age
Skip to main content

One Sulzberger Is Exiting The New York Times Publisher Post, Another Is Taking Over 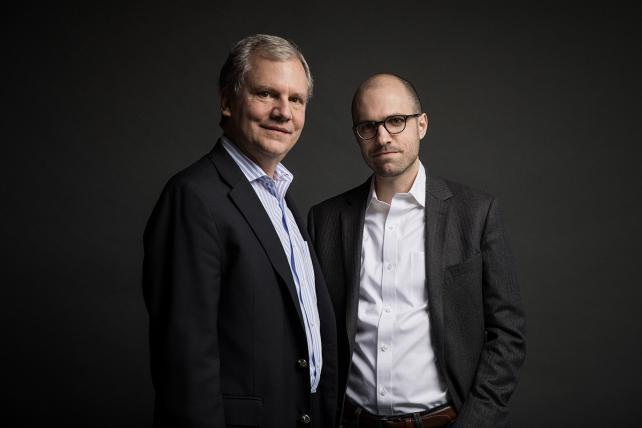 The New York Times is making its own headlines this morning. Publisher Arthur Ochs Sulzberger Jr., the 66-year-old business chief of the paper since 1992, is passing the baton to his son, Deputy Publisher Arthur Gregg Sulzberger, 37, effective Jan. 1. The New York Times Company issued a statement saying that its board approved the move in a meeting on Thursday. The senior Sulzberger will remain chairman of the board, a position he's held since 1997.

Sydney Ember, in the the paper's coverage of its own leadership shift, notes that A.G. Sulzberger is "best known for heading the team that produced The Times's 'innovation report' in 2014." That document was intended to serve as a guide for the transformation of the inky icon to a digital-first journalistic institution. When it was released to the newsroom and then leaked to the public in May of that year, Joshua Benton, director of Harvard's Nieman Journalism Lab, wrote,

While it was a group effort ... the leader of this committee was Arthur Gregg Sulzberger, the publisher's son and a potential heir to the throne, either when his father retires in a few years or sometime thereafter. His involvement in this report shows that he understands the issues facing the institution. That speaks well for the Times' future.

A statement from the Times also lists the incoming publisher's work on the 2014 report as a highlight of his journalistic bonafides:

A.G. Sulzberger was a reporter at The Providence Journal and The Oregonian before joining The Times's metro desk in 2009. He later worked as a national correspondent, covering the Midwest as head of the Kansas City bureau. A.G. has been one of the architects of The Times's digital transformation and was the principal author of the 2014 Innovation Report, which focused on growing and engaging The Times's digital audience. He has also been one of the driving forces behind The Times's business strategy, including the shift to a subscription-first business model. He is a graduate of Brown University.

During his quarter-century tenure as publisher, the elder Mr. Sulzberger presided over the paper's national expansion and guided it through the advent of the internet. In 1996, Mr. Sulzberger moved The Times online. In 2011, when media companies were unsure of their digital strategies, he instituted a pay wall. In recent years he espoused a business plan focused on subscribers and digital growth. The Times, which counts 2.5 million digital subscriptions, is one of the few newspaper companies with a growing newsroom during a time when the industry as a whole is struggling. With Mr. Sulzberger in control, The Times weathered not only the sometimes glitchy early days of its digital transformation, but also an economic recession that claimed dozens of newspapers nationwide.

As of this writing, the Times coverage, though, feels like a bit of placeholder—suggesting that the newsroom, which has seen this move coming for years, didn't expect it today—and ends with "This is a developing story with more to come."

A fuller inventory of Arthur Ochs Sulzberger Jr.'s tenure is surely forthcoming from the paper—including rocky episodes such as the Jayson Blair plagiarism and fabrication scandal that exploded in 2003 (when "fake news" was actually fake news) and the 2014 ouster of the paper's first female executive editor, Jill Abramson, whose management style rankled many in the newsroom and, apparently, Sulzberger Jr.

A New York Times statement notes that "A. G. Sulzberger will be the sixth member of the Ochs-Sulzberger family to serve in that role since its patriarch, Adolph S. Ochs, purchased the paper in a bankruptcy sale in 1896."

It's a measure of how long Sulzberger Jr. has been publisher—he passed the quarter-century mark last year—that outsiders, at least, largely stopped referring to him as "Pinch," a belittling take on his larger-than-life father's nickname "Punch." He was also referred to by some as "Young Arthur" well into middle-age. (Arthur Ochs Sulzberger died in 2012 at age 86.)

No word from the Times on what we're supposed to call Arthur Gregg (other than A.G.).