Last night on "The Daily Show," Trevor Noah served up a plug for "The Donald J. Trump Presidential Twitter Library," a hardcover book from Noah and the show's writers that goes on sale today. It's been a long time in the making, given that just over a year ago The Donald J. Trump Presidential Library debuted as an actual experiential thing: a pop-up exhibition that was housed in a 4,000-square-foot, marble-fronted Manhattan storefront space at 3 West 57th St., just a block from Trump Tower, for one weekend only. Pop-up stops in Chicago, San Francisco and, most recently, Los Angeles, followed.

As Noah notes in the segment above, the book's release got a nice boost in the form of the news last week that special counsel Robert Mueller is looking closely at Trump's tweets as part of his ongoing investigation. The print "Twitter Library" is billed as "an illustrated portrait of the Donald J. Trump Twitter account, with analysis and 'scholarly' commentary from the writers of The Daily Show and an introduction by Trevor Noah."

As of this writing, The Daily Show's book holds the No. 1 spot on Amazon's Political Commentary & Opinion chart.

P.S. Here's a view of the full wrap-around cover: 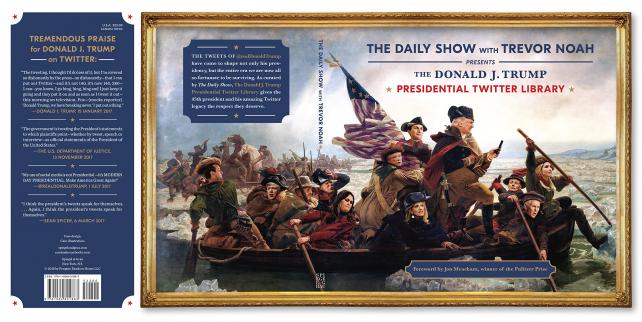