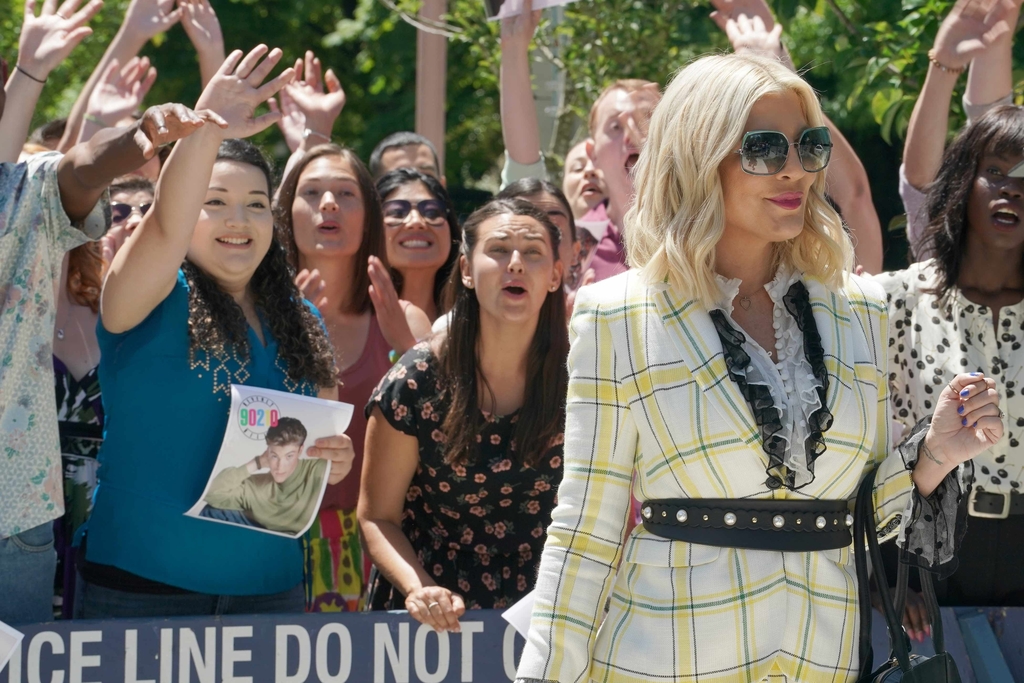 Just as sure as some big sloppy salmon is going to Augustus Gloop that Fish Tube of Internet renown, so too shall TV viewers, or at least the ones who still watch the commercials, age out of the upper reaches of the demo. Quantitative changes rather quickly become qualitative; differences in degree lead to differences in kind. Water gets hotter and hotter, and then all of the sudden it’s vapor; viewers become older and older, and the next thing you know they’re chaff.

This is never more true than during the summer, an interval in which many of the more desirable consumers are preoccupied with matters wholly unrelated to the primetime television schedule. (If Instagram is anything to go by, they’re all ripped to the gills on White Claw and solipsism, so no harm done.)

With six weeks to go before the 2019-20 season gets underway, the median age of the broadcast primetime audience is 58.7 years old, TV usage among adults 18-24 is down 17 percent and the Big Four networks are averaging a 0.5 C3 rating in the 18-49 demo. In July, fewer than 795,000 members of the dollar demo watched the commercials on NBC each night, and the Peacock was the highest-rated network during the month. Currency deliveries were down 19 percent last month, which means that the promos for this fall’s new and returning series reached one-fifth as many demographically desirable viewers as they did in the year-ago period.

Given that the majority of those tuning in to network TV have aged out of the target, it’s probably safe to say that the purveyors of bubblegum, energy drinks and video games may want to take their summer business to basic cable. But for marketers looking to link up with older viewers, those millions of people in their 50s, 60s and (Astonished Face Emoji) beyond who actually, you know, buy stuff, there are an awful lot of broadcast bargains to be had. What follows is something of a thrifty shopper’s guide to some of TV’s most overlooked audiences.

(Don’t) spare me the drama
If you’re looking to unload a whole bunch of blood thinners, cat food and mid-priced automobiles, you could do worse than to pick up a spot or two in one of the summer broadcast dramas. According to Nielsen live-plus-same-day data, the median age of the audience tuning in to the eight first-run  potboilers (six of which are tucked away in 10 p.m. slots) is a ripe 63.1 years old. For marketers who aren’t under the impression that all vital functions cease at age 55, a good deal of impressions may be found on the cheap in such shows as CBS’s “Instinct” and ABC’s “Grand Hotel.”

According to Nielsen, only 19 percent of all “Instinct” viewers fall within the confines of the adults 25-54 demo, and while that may not be ideal for CBS’s purposes, it presents a hell of an opportunity for brands aiming for that not-inconsiderable crowd of older Americans who still watch the advertisements and, yes, often make purchasing decisions based on those very same commercial messages. As a bonus, you can still buy spots in this season’s three remaining episodes for about a 20 percent discount compared to the $110,000 unit cost CBS commanded during the show’s inaugural run.

“Grand Hotel” is another worthy investment for advertisers who aren’t shilling acne wash or Rihanna’s Fenty Beauty makeup line. ABC’s sudsy drama serves up an audience with a median age of 60.1 years—in this crowd, they’re practically teenyboppers—and only 24 percent of those tuning in are in the 18-49 demo. Starring Demián Bichir (FX’s “The Bridge”) and Roselyn Sánchez (Lifetime’s “Devious Maids”), “Grand Hotel” skews strongly female; per Nielsen, Sunday night’s episode delivered 1.71 million women 18+ and just 609,000 adult men. That and its low admission fee—the average unit cost in the upfront was around $80,000 a pop—have helped “Grand Hotel” attract business from the likes of Target, Macy’s and L’Oreal Paris.

While all five of the eldest-skewing summer shows are dramas, marketers looking to take advantage of all those free 50+ and 55+ impressions are going to have to hustle. There are currently 10 hours of those particular shows set to air between now and the start of the fall season, and another four installments of “Grand Hotel” remain on the market.

Big bucks, no Whammies
The median age of ABC’s retro game show reboots, a stable that includes the resurrected ’80s project “Press Your Luck” and the oft-revitalized “Card Sharks,” is 60.4 years old, which stands to reason, given the obvious appeals to nostalgia that are at work here. From a ratings perspective, this throwback six-pack has put up decent numbers, averaging 4.1 million viewers and a 0.7 rating, which works out to around 925,000 adults 18-49.

If ABC’s devotion to the genre hasn’t given rise to a show that delivers “Jeopardy!”-size audiences, it’s hard to fault the network’s programming strategy. The game shows account for two entire nights of primetime real estate and serve as a far cheaper investment for ABC than its summer dramas. These blasts from the past also draw a much larger crowd of would-be consumers than ABC’s scripted productions, more than doubling the demo deliveries of “Reef Break” while easily outperforming the wheezy Marvel franchise “Agents of S.H.I.E.L.D.”

ABC’s two biggest game shows are “Celebrity Family Feud” and “The $100,000 Pyramid,” which air back-to-back on Sunday nights. Hosted by the ubiquitous Steve Harvey, “Feud” essentially got the game show reboot effort rolling at ABC four years ago, when its brief six-night run scared up 8.33 million viewers and a 2.0 in the dollar demo. That success prompted ABC to build an entire night around “Feud” the following summer, posting the show in the anchor slot ahead of the resuscitated “Pyramid” and “Match Game.” (Not every retread found an audience; in the summer of 2017, new-look versions of “Battle of the Network Stars” and “The Gong Show” failed to generate much interest.)

As much as “Feud” and “Pyramid” have drawn a crowd—together the shows average 5 million viewers and a 0.9 in ABC’s primary demo—many of the viewers who check in with the shows every week are well past their industry-sanctioned sell-by dates. “Feud” and “Pyramid” reach an audience with a median age of 61.2 years, and 78 percent of these viewers aren’t part of the 18-49 set. But with the right set of eyes, that chaff can be seen as an opportunity rather than a drawback.

As with NBC’s “The InBetween,” the telcos have swarmed ABC’s game shows. According to iSpot.tv data, six wireless services account for the top 20 spenders in “Feud,” and three of the 10 biggest advertisers are T-Mobile, Verizon and AT&T. Retail and quick-serve restaurants are well represented, particularly by Target and McDonald’s, both of which have spent the better part of the summer snatching up primetime inventory.

Two outliers
Marketers who have little interest in reaching the “Golden Girls” crowd this summer can still find a few highly-targeted broadcast series, but efficiency doesn’t necessarily correlate with reach. For example, the second-youngest-skewing show on the Big Four is currently the hybrid curio that is “What Just Happened??! with Fred Savage.” This send-up of the wildly overplayed after-show genre (think “Talking Dead” and the dozens of similar shows that have followed in its wake) boasts a practically jejune median age of 49.9 years, making it the envy of the geriatrics Mr. Burns-ing their way around the upper reaches of the first chart.

Unfortunately, while nearly half of the “What Just Happened??!” audience fits into Fox’s target demo, the show’s insubstantial deliveries don’t make for a terribly compelling buy; per Nielsen live-same-day data, Kevin Arnold’s weird meta exercise is averaging around 682,000 viewers and a 0.2 in the 18-49 demo. Nothing ever gets canceled, and certainly not during the summer, but there has to be a better use of your marketing budget than a $200 CPM.

On the other side of the ledger, Fox also happens to have bragging rights to the summer’s lone new breakout series, and as with the largely unseen “What Just Happened??!,” this show also skews young. The series premiere of the cryogenic “Beverly Hills, 90210” initiative “BH90210” last week scared up 3.86 million viewers, of whom 1.96 million were adults 18-49. In other words, 51 percent of those who tuned in for the reunion could claim membership in Fox’s target demo. The median age of the premiere’s audience was 48.1 years old, making “BH90210” the summer’s youngest-skewing series to date.

If you managed to buy a spot in the “BH90210” launch before the place was overrun with movie studios, wireless providers and Invisalign (the latter of which was gifted with a windfall of free media this spring when singer Billie Eilish shouted out the brand at the top of her debut album), you made perhaps the smartest investment of the summer. That said, it’s unlikely you’ll stumble across another $22.12 CPM during the show’s remaining five weeks, as scatter pricing is up 20 percent compared to the rates hashed out in the year-ago upfront.