2015 in Review: The 10 Most-Watched Entertainment TV Shows of the Year | Ad Age
Skip to main content

2015 in Review: The 10 Most-Watched Entertainment TV Shows of the Year

"NCIS" may be in its 13th season, but it isn't showing any signs of fading, with the CBS series ranking as the most-watched entertainment series in 2015 based on commercial viewing.

The below chart ranks the total commercial viewers of entertainment shows in the three days after the program airs, according to Nielsen figures supplied by Dentsu Aegis. The chart compiles C3 viewers from Jan. 1 through Nov. 30 for all original episodes of entertainment shows that aired in prime time. Sports and news programming are excluded.

It's worth noting that the chart looks across two different seasons, the end of the 2014-15 seasons and start of the 2015-16 season. And it tallies total audiences, not the demographic groups -- particularly viewers from 18 through 49 years old -- that advertisers typically buy against.

CBS dominates the list with five of the top 10 shows. "The Big Bang Theory" places at No. 2, averaging 15.9 million viewers in the three days after it airs, while "NCIS: New Orleans" comes in at No. 4 with 14.1 viewers.

Fox's "Empire" comes in at No. 3, averaging 14.8 million viewers. The hip-hop drama broke records in its first season, which debuted in January, growing its audience every week.

Only one cable series, AMC's "The Walking Dead," appeared on the chart, coming in at No. 5.

Two reality competition shows, ABC's "Dancing with the Stars" and both the performance episode and results show of NBC's "The Voice," made the top 10.

The final season of CBS' "Two and a Half Men" rounded out the top 10, averaging 10.6 million viewers. 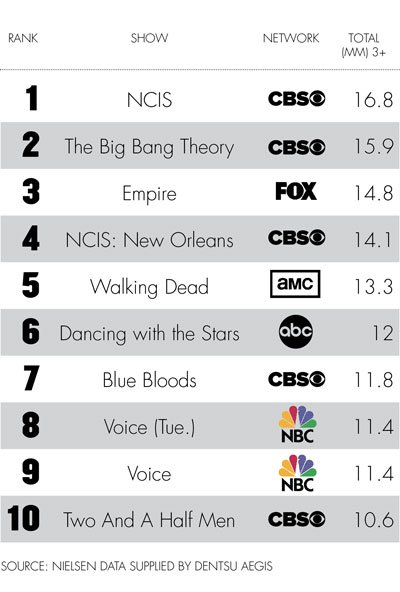