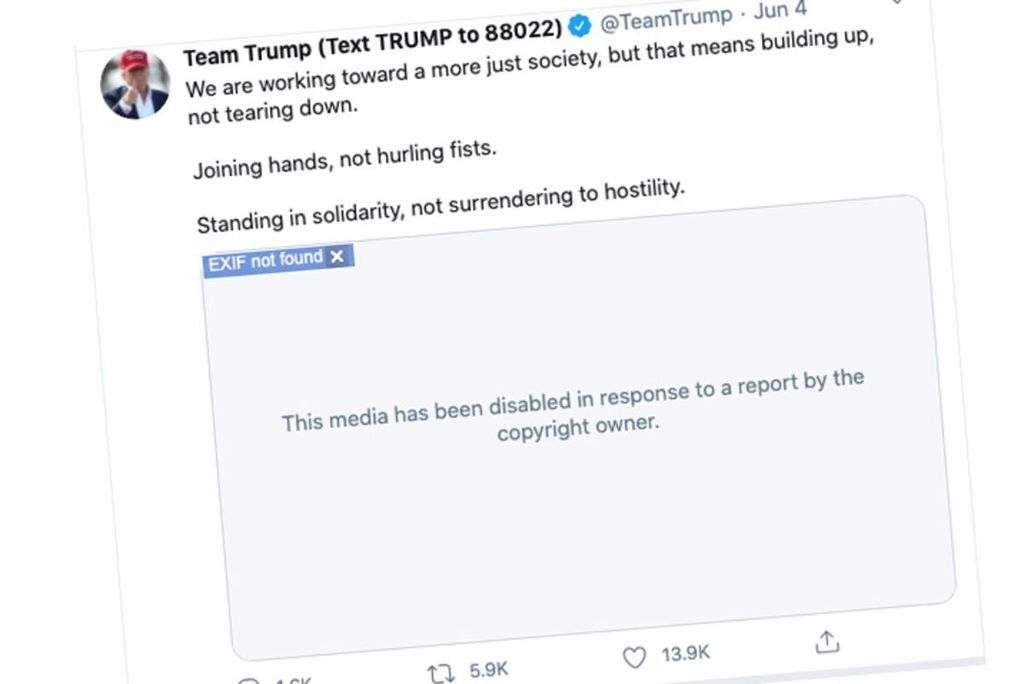 Twitter on Thursday removed a Trump campaign video tribute to George Floyd due to a copyright claim, the latest escalation in a confrontation between the social media platform and its most influential user.

The @TeamTrump account had tweeted a video collage of images and clips depicting peaceful protests, moments of mourning and law enforcement officers hugging civilians in the wake of the killing of George Floyd, an African-American man, while in police custody. Accompanied by a gentle piano soundtrack and President Donald Trump’s speech about “healing, not hatred,” it urged Americans to unite.

The video, still available to view on the president’s YouTube channel, appears to have gathered most of its content from social media posts, and at least one copyright holder made a complaint to Twitter about the use of their photo, a company spokesperson told The Hill.

Trump has an audience of 81.7 million followers on his personal Twitter account, which he uses to celebrate accomplishments of his administration and, often, lambast opponents. In the wake of Floyd’s death and subsequent protests, he tweeted a warning that “when the looting starts, the shooting starts,” which Twitter deemed to have been in breach of its rules against glorifying violence and led the company to hide that message behind a warning label. Earlier, the social media giant had placed a fact-check notice on another Trump tweet, which also earned the president’s displeasure.

In retaliation for what Trump and his supporters have deemed political bias, the president issued an executive order targeting social media companies like Twitter. The move—which could expose Twitter, Facebook and other technology giants to a flurry of lawsuits—sparked broad condemnation from liberals and even some conservatives who accused the president of launching an unconstitutional assault on free speech.