As the AAF burns through its cash, the WWE boss adds to his war chest 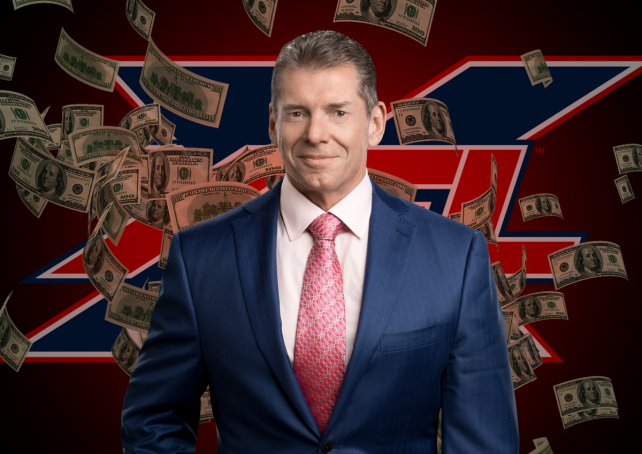 While a key investor in the upstart Alliance of American Football has suggested that the spring league may not have the cash reserves to survive its first season, the XFL isn't taking any chances with its 2020 relaunch. According to a filing with the Securities and Exchange Commission (SEC), WWE Chairman Vince McMahon last Wednesday sold 3.2 million shares of the company's stock to help further fund the XFL's second act.

In offloading the shares, which represent 4 percent of the WWE's total outstanding Class A and B stock, McMahon pocketed just under $272 million. McMahon will invest the money in his Alpha Entertainment venture, a privately-held offshoot he established in 2017, shortly before announcing that he'd be bringing the XFL back online nearly 20 years after its disastrous maiden voyage.

This marks the second time McMahon has cashed in a big chunk of his WWE holdings. The wrestling magnate in December 2017 sold 3.34 million shares worth around $100 million; in that particular 8-K filing, the WWE reported that McMahon had said that he had "no current plan to sell additional shares of the company's stock," and that he intended to stay on as its chairman and CEO "for the foreseeable future."

The same language was used in Wednesday's SEC filing.

After that first significant selloff, McMahon went on to unload another $22.9 million block of shares a year later, which translated to about 1 percent of his overall stake in the WWE. All told, McMahon has sold nearly $400 million in WWE shares in order to fund the XFL, putting him in shooting range of his pledge to devote $500 million to the revival effort.

While that's a lot of scratch, it's not as if the head of the wrestling/entertainment juggernaut is in any danger of losing his shirt. According to the WWE, McMahon still owns 28.7 million shares in the company, which works out to a cool $2.49 billion.

Those massive cash reserves means that McMahon won't be scrambling for angel investors or be in any way dependent upon outside capital—an autonomy that the AAF cannot claim for itself. On the same day McMahon made his big stock play, AAF Chairman Tom Dundon told USA Today that his league would likely go belly-up if it couldn't hash out a development deal with the NFL.

"If the [NFL] Players Union is not going to give us young players, we can't be a development league," Dundon told Kevin Allen and Mike Jones. "We are looking at our options, one of which is discontinuing the league." Dundon, who in February committed to invest $250 million in the cash-strapped AAF, is looking to cut a deal that would allow NFL practice squad members and unseasoned players to participate in the spring league. Issues related to player safety and the terms of the standing collective bargaining agreement have dissuaded the NFLPA from pursuing a formal arrangement.

While Dundon may simply be trying to negotiate in the press, his hands are most definitely holding the AAF's purse strings, and should he decide to throw in the towel, co-founders Charlie Ebersol and Bill Polian may be out of luck. In the meantime, it's business as usual for the AAF, which is scheduled to host its first-ever championship game on Saturday, April 27. The title tilt is set to air on CBS, which in February drew 3.25 million viewers and a 1.9 household rating with its inaugural AAF broadcast.

Since the CBS opener, the AAF is averaging 427,000 viewers and a 0.2 household rating on NFL Network and TNT. CBS on April 6 will air the Memphis-San Antonio AAF game as a lead-in to its Final Four coverage before splitting the twin playoff games with TNT on April 21.

Speaking of broadcast partners, the deep-pocketed XFL has yet to hash out a deal with a TV network or streaming platform, although it's been in talks with the likes of ESPN and Fox Sports. When McMahon first unveiled his plans to reboot the XFL, he told reporters that a hybrid rights package would likely be in the offing.

"As we reimagine the game, we may reimagine the way we distribute the game," McMahon said, adding that the league would "probably consider a combination of any number of forms of presentation."

One network that is unlikely to roll the dice with McMahon and his football aspirations is NBC. While the premiere broadcast of the gimmicky, gonzo XFL put up big numbers for a Saturday night in February 2001—14 million viewers tuned in to NBC's coverage of the Las Vegas Outlaws' 19-0 victory over the New York/New Jersey Hitmen—the ratings plummeted once fans realized they were being sold a bill of goods.

After debuting to a 9.5 household rating, turnout for Week 2 of the XFL season dropped 52 percent to a 4.6. Deliveries fell another 33 percent in Week 3, at which point NBC began missing its ratings guarantees. While the network assured advertisers the XFL would average a 4.5 rating throughout the season, the 12 weeks of broadcasts (including the playoffs and the championship game) badly missed the mark with a 2.9.

All told, NBC lost an estimated $35 million on the venture, and cut ties with the XFL shortly after the season ended.