Plus: The Time 100 ‘celebrity petting zoo’ and more drama at The Markup
READ THIS NEXT
ViacomCBS introduces digital ad platform 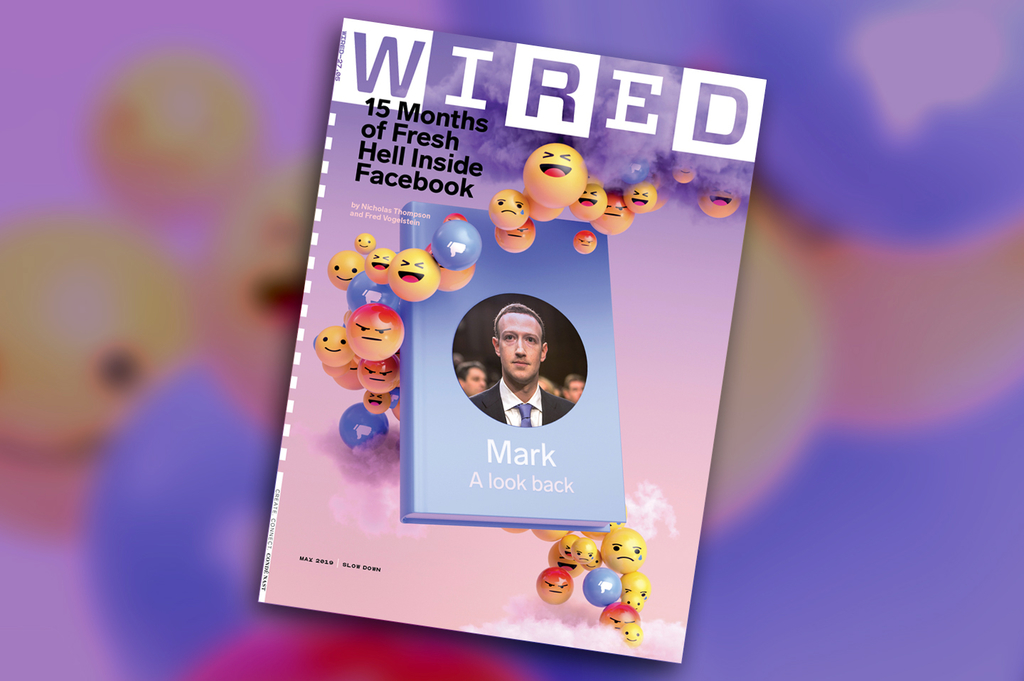 Facebook II: Wired is out with a sequel of sorts to its widely-read March 2018 deep-dive feature about Facebook that came with a cover photo-illustration of a bruised and bloodied Mark Zuckerberg. That story, written by Editor-in-Chief Nicholas Thompson and Contributing Editor Fred Vogelstein, was titled “Inside the Two Years That Shook Facebook—and the World,” and was also promoted online with the alternate headline “Facebook’s Two Years of Hell.” Fast-forward to the May 2019 cover, which carries the headline “15 Months of Fresh Hell Inside Facebook.”

For their follow-up, the authors spoke with 65 current and former Facebook employees. As Thompson and Vogelstein write,

Facebook’s powerful network effects have kept advertisers from fleeing, and overall user numbers remain healthy if you include people on Insta­gram, which Facebook owns. But the company’s original culture and mission kept creating a set of brutal debts that came due with regularity... The company floundered, dissembled, and apologized. Even when it told the truth, people didn’t believe it. Critics appeared on all sides, demanding changes that ranged from the essential to the contradictory to the impossible.

Keep reading here. Incidentally, Condé Nast spokesman Corey Wilson tells Ad Age that the new Facebook feature has been a boon for subscriptions (Wired has a metered paywall that prompts readers to pay up), along with some other recent posts including “Exclusive: What to Expect From Sony’s Next-Gen PlayStation” and “First Look: Hands on With Samsung’s Galaxy Fold.” Not only did Wired see its highest one-day surge in subscriptions (+267 percent on Tuesday) so far this year, but it set an all-time Wired.com engagement record in a 24-hour period: 3.7 million engaged minutes (also on Tuesday).

Warm and fuzzy: Let’s switch gears regarding Facebook for a moment, shall we? After all, the social network isn’t all controversy and fake news. It’s also about... animals. Lots and lots of animals. So far in 2019, social video analytics firm Tubular tells Ad Age, The Dodo is the publisher best leveraging that internet obsession on Facebook. To wit:

The problem with kidfluencers: The Guardian is out with a disturbing look at youthful video publishers—so-called kidfluencers—on the web, and the way they seem to be falling through legal safety nets. As Julia Carrie Wong notes, child-labor laws protect minors in the traditional Hollywood studio system, but internet-famous kids creating “content” at home, often at the behest of their parents, are escaping scrutiny—until it’s too late. One chilling passage recounts the case of Machelle Hobson, a 47-year-old Arizona mother who was charged in March with abusing five of her seven adopted children. At the time of her arrest, you may have heard her referred to in the media as a “YouTube mom,” but Wong serves up specifics and puts the horror story in context:

The details of the abuse—beating, pepper-spraying, molesting and starving children ages six to 15—are horrific; the alleged motivation is chilling. “All the children made mention of having to participate in their mom’s YouTube channel called Fantastic Adventures where she has over 700,800 followers and over 242 million views,” read the police charging documents. “The Fantastic Adventures series stars the adopted children in different scenarios. They stated they are disciplined in the manners above if they do not recall their lines or do not participate as they are directed to. They further stated this is one of the reasons their mom took them out of school so they can keep filming their series and they mentioned they have not been in school for years.”

In the wake of Hobson’s arrest, YouTube de-monetized Fantastic Adventures, then killed the channel. The Arizona Republic, Wong notes, reports that a local prosecutor tracked down a W-9 from Google (YouTube operates as a subsidiary of Google under the Alphabet Inc. umbrella) showing that Hobson made nearly $300,000 from Fantastic Adventures in 2018. Keep reading here.

Publishing startup scandal of the moment: “A couple of days after Julia Angwin was fired as editor-in-chief of The Markup—the nonprofit investigative news outlet she co-founded—support for her in one key sector has grown,” Nieman Lab’s Laura Hazard Owen reports. “The foundations who have backed the much-anticipated startup, led by the Craig Newmark Philanthropies, issued a joint statement saying they are looking into Angwin’s firing, which set off an exodus of Markup employees, and plan to ‘reassess’ their support of the site.” The Markup, which has yet to launch, describes itself as “a new publication illuminating how powerful institutions are using technology in ways that impact people and society.”

Photo op: WWD’s Kali Hays reports about a new addition to the Vanity Fair masthead: Collier Schorr, a photographer well known in the art world (she’s represented by New York’s 303 Gallery and her work has been exhibited at A-list institutions around the world including the Museum of Modern Art). As Hays notes, Schorr is new-ish Editor-in-Chief Radhika Jones’ “first addition to Vanity Fair’s small stable of mostly longtime—and over 60 years old—contributing photographers, which still includes Annie Leibovitz, the only woman for some years, along with Jonathan Becker, Mark Seliger and Larry Fink.” Schorr shot Nicole Kidman for VF’s May cover.

The best of Carr: “Collection of David Carr’s writings coming in 2020,” from the AP via the New York Post. The beloved New York Times reporter and media columnist died in February 2015.

Party Time: Today’s “Styles” section of the New York Times gives major play to Tuesday night’s celebrity-magnet Time 100 party at Jazz at Lincoln Center for the newsweekly’s annual cover package. A bit of display copy on the layout reads “The room turned into a celebrity petting zoo.” The print headline reads “Influential People Pack the Time 100 Gala,” but the online version, under the alternate title “Taylor Swift, Nancy Pelosi and Jared Kushner at the Time 100 Gala,” serves up more images (in the form of a 20-shot slide show from photographer Krista Schlueter) than the inky version.

And finally... at the newsstand: Reality series "Restaurant Impossible" returned to Food Network on April 20 after a three-year hiatus. Timed to that, were you wondering what chef Robert Irvine, the restaurant-makeover impresario who hosts the show, looks like with his shirt off? No? Well, tough luck—we’re showing you anyway via the current cover of Muscle & Fitness: