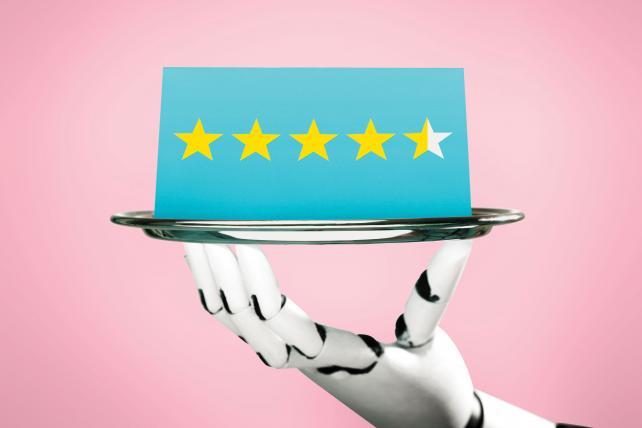 When his father died last year, Richard Boyd began using artificial intelligence to model what his dad would be doing today if he had not passed away. Boyd likens this to almost having him alive. "For the past eight or nine months, I can 'visit him' and see what he's interested in," he says. The model found that on the Fourth of July his dad would have read about the Air Force, Vietnam, Donald Trump, guns and gun control, and the Santa Fe Railway. He likely would have attended an event at a local Veterans of Foreign Wars post, and created a home fireworks display. He calls this exercise "oddly therapeutic."

Boyd is not delusional. Nor is he a character in a "Black Mirror" episode. He owns his own artificial intelligence consultancy, Tanjo, and has spent his career creating computer simulations. He previously sold a 3-D gaming startup to Lockheed Martin, which he left in 2013.

In a very personal way, his experiment with his dad helps illustrate how Boyd is using AI to stand in for real humans in market research. The idea is to use the biggest data sets practical—including media consumption, purchase, census, housing or any other information available in companies' customer databases—on the broadest population­ to construct simulated but realistic individuals and households that can be exposed to endless messages or product ideas, without them ever getting bored or lying.

The Defense Department has tried to win hearts and minds in Afghanistan by modeling the country's population to simulate how people there would react if the U.S. built a new school, for example, or fixed a road. Boyd studied that effort—the military's Defense Advanced Research Projects Agency has held several open bids and conferences on AI projects—but his market research project didn't fully take flight until he was on a broader assignment with a consumer electronics company looking to apply machine learning to its business.

Although the company had spent millions of dollars to create a 14-part segmentation model of its consumer base, Boyd noticed that its marketing analytics were still surprisingly limited and inefficient. He wondered why the analytics could not cover all 126 million U.S. households. Boyd decided that AI could help develop a far more comprehensive, flexible model that would find unexpected insights faster and cheaper.

That was the start of Tanjo Animated Personas (TAP), the company's simulated models of real human beings that can be queried to see how they'll respond to words, phrases and product concepts.

Research firm PersonaPanels has licensed TAP to create artificial-human panels that draw on data from Nielsen's 250,000-household Homescan consumer panel and retail scanner data to simulate focus groups and panel surveys. Nielsen, rather than viewing the tech as a threat to its own methodology, earlier this year made PersonaPanels one of its Connected Partners, which receive access to its data and are sold alongside other products from the largest research firm. Brett Jones, who heads Nielsen's Connected Partners program, says marketers are reluctant to disclose how they're dabbling in AI, but that the idea has "resonated very well" with them.

Indeed, marketers at this point are more secretive about their AI experiments than the military. But their trials are under way all the same.

WPP's Blue State Digital, for one, began using Tanjo Animated Personas late last year for "one of the largest brands in the U.K.," says Samir Patel, managing director of the London office of the shop, whose U.S. division became famous for its work on Barack Obama's 2008 presidential campaign.

"We're looking at 'How does this compare to something like a focus group?' " Patel says. " 'How does it accelerate or enable them to do testing of messages and propositions on a scale and speed that wouldn't otherwise be possible?' The early results are promising."

Patel sees the AI tool solving several problems alongside, or perhaps in place of, traditional research. It's particularly valuable for brands confronted by growing questions about their relevance amid declining loyalty and rising media distractions among younger audiences, he says.

Take, for example, social. "On the message-testing side, brands spend a crazy amount on paid advertising on social" to qualify and refine ideas before taking them broader, Patel says. Using Tanjo Personas speeds up that process without the cost of paid media.

Moreover, at a time when brands sometimes face social media backlash based on unintended reactions to ads, AI testing tools can possibly spot problems before they hit social media, he says.
And using artificial humans for research has another advantage in the age of GDPR and heightened privacy concerns by giving brands "confidence that they can put something out that will work with certain audiences without using any personal data at all," Patel says. "I've seen lots of clients [affected by] GDPR just stop activity because they're scared. This kind of gives a way to still be experimental with very little to no risk."

That's exactly what happened with a business-to-business tax software client of Tanjo's, which Boyd declined to name, and which was moving into the consumer market. The software company didn't have access to much direct data on its current (and potential) customers, but running its messages and proposition past the artificial personas helped identify previously unidentified but promising prospects, Tanjo claims: community college students.

For a poultry brand, which Tanjo also declined to name, it says that while real-life focus-group participants expressed preference for organic-certified chicken at $8 a pound, personas with the same profiles suggest people prefer chicken raised without antibiotics (but not organic-certified) at a price of only $4 a pound—and more profit to the brand.

Boyd says the chicken case demonstrates a fundamental problem of focus groups and surveys. People lie, or at least don't truly know what they'll do.

The classic case is condoms, he says. Surveys about the frequency of sex and condom use among men and women alike routinely project a market four or more times bigger than sales data show it really is.

The tax software example demonstrates another problem with surveys, Boyd says: They miss insights by failing to ask the right people the right questions. AI, he has found, can run so many scenarios across so many simulated people that unexpected insights emerge more often.

"It's essentially the new scientific method," Boyd says. "The old was you had to come up with your hypothesis and do experiments around it. But machine learning can ingest such large amounts of data ... bring all the sources together and let the system find every hypothesis that might be true.

Commonly, we'll talk to somebody about who their customers are and what they value. Then we take raw data and run it through machine learning. In almost every case, we'll find something that surprises the company, and it's because machine learning has that outside perspective [and finds] correlations that don't occur to humans very often."

Michael McGuire, a VP of research for Gartner who's reviewed Tanjo's technology, agrees that even the best survey is limited by having to ask questions, which may be the wrong ones, he says. Beyond that, respondents who try to tell the truth sometimes still have trouble knowing what it is.

"Observation has become more important to marketers, because people don't always do what they say," McGuire says. Tanjo allows for (simulated) observation on a huge scale at rapid speed, he says.
And then there's the aforementioned lying problem. Panelists tend to be on multiple panels, with one major study finding the average participant is on eight, says PersonaPanels CEO Patrick Gorman.

Panelists doing the work to supplement their incomes have an incentive to lie on qualifying questions to be included in studies, and by nature of their choice of side hustle, they may not be truly representative. They may be more swayed by price promotions, for example, than the broader population.

Tanjo wasn't the first company to use computer-generated models of real people in market research and analytics. ThinkVine, which was founded in 2000, developed a similar agent-based modeling approach to optimize media plans.

Founder Damon Ragusa, now CEO of educational software company Abre, was part of a group that ultimately sold ThinkVine to Ignite Technologies in 2016. He says it was an uphill battle convincing marketers to use simulations of customers rather than the industry standard: marketing-mix models based on regression analysis of commonly available media, economic, weather and sales data sets.

"The reason agent [AI] models are interesting is that they're very close" to human behavior, Ragusa says. But, he acknowledges: "The world is full of better mousetraps that didn't win."

Faced with a choice, marketers tend to go with the simpler approach, or at least the one with more tenure, which makes it easier to justify decisions to bosses, he says. General agent-based research can be cheaper than traditional surveys and focus groups because there's no need to recruit or pay real humans. But agent-based media analytics can actually be more expensive when it involves buying additional data that isn't required the traditional way, Ragusa says.

Ragusa believes Tanjo Animated Personas may have an easier time than his company did because AI has gone from exotic to heavily hyped over the past decade, opening more minds and wallets.
"We were breaking ground in even talking about what an empirical-based model is," Ragusa says. "The next technology, or the ones after that, will have an easier row to hoe. The question is how deliverable are the results, and how easy it is to use it."